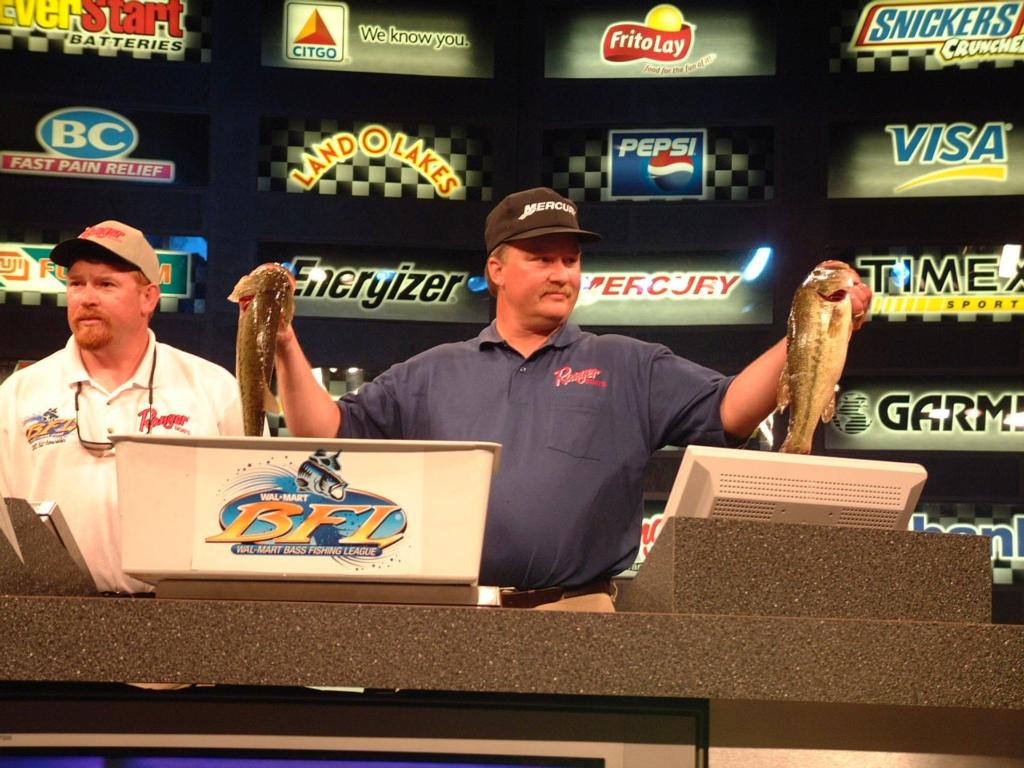 HOT SPRINGS, Ark. – Curt Fannin of Prestonsburg, Ky., used an 11-pound, 12-ounce catch to capture the early lead in the inaugural $345,000 Wal-Mart BFL All-American tournament on Lake Hamilton. Fannin, who won the Chevy Wild Card regional tournament at Old Hickory Lake, Tenn., last year to qualify for the 2001 All-American tourney, said that his day on the water couldn’t have gone much smoother.

“Right now I feel great. I pretty much had my limit by 10 a.m. and I was able stop fishing by noon,” said Fannin, who normally fishes in the BFL’s Choo-Choo Division. “I’m right where I want to be.”

With a number of prime fishing locations already scouted out, Fannin said that he feels like he has as good of a chance as anyone to claim the top prize of $100,000 in the Boater Division.

“I caught all of my fish in one spot today and I have another spot I found in practice where there are even bigger fish,” he said. “I’m pretty confident right now. I had a good practice and I think I have a good pattern that should work regardless of the weather conditions. It’s going to take some pretty tough conditions for me not to catch a fish tomorrow.”

“It feels good to be where I’m at right now,” said Cagle, who also qualified for the Red Man All-American tournament in 1999 and 2000. “I finished in sixth place in last year’s All-American – 5 ounces out of the top five – so I’m ready to make it over the hump and get into the big show this year.”

Cagle, who believes he needs about 10 pounds to qualify for the top-five in tomorrow’s competition, said he likes his chances.

“I’m really confident right now,” he said. “It’s just a matter of getting those quality bites. I had five good bites today and hopefully, I’ll get a whole lot more tomorrow.”

“I think I have a good, solid pattern,” said Scheide. “Hopefully, I can continue to fish well.”

Rounding out the top five qualifiers were Rodney Hardwick (tied for fourth place) of Connersville, Ind., and David Wright of Lexington, N.C., with identical catches of 10 pounds, 7 ounces.

Buoyed by a massive 7-pound, 14-ounce largemouth bass, Randy Kelly of Inola, Okla., took a commanding lead heading into the Co-Angler Division finals scheduled for Friday afternoon. However, to hear Kelly tell it, he was surprised as anyone by the size of the fish that could very well net him the top co-angler prize of $50,000.

“It really didn’t feel like a big fish at first,” said Kelly, who recorded a total catch of 13 pounds, 5 ounces. “But then when I finally saw it, I was shaking like a leaf. It went around the boat two or three times before I finally landed it. I was very happy to get it in the boat.”

Kelly believes that today’s successful fishing experience has put him in prime position to capture the co-angler championship.

“Yeah, I think I can win it all,” said Kelly. “It’s still early. I have one more day to go. But I’m feeling really confident right now. A 10-pound stringer tomorrow will definitely put me over the top.”

Although $50,000 is on the line tomorrow, Kelly said that he isn’t concentrating on the fact that this could be the biggest potential payday of his life.

“To tell you the truth, the money is not really the issue here,” said Kelly. “This is the first time co-anglers have been invited to this tournament and I want to be the first guy to win it. I’m just going to go out there and have fun fishing tomorrow.”

Tomorrow’s takeoff is scheduled to take place at 7 a.m. Friday at the Dare Devil Boat Launch on Lake Hamilton in Hot Springs, Ark.