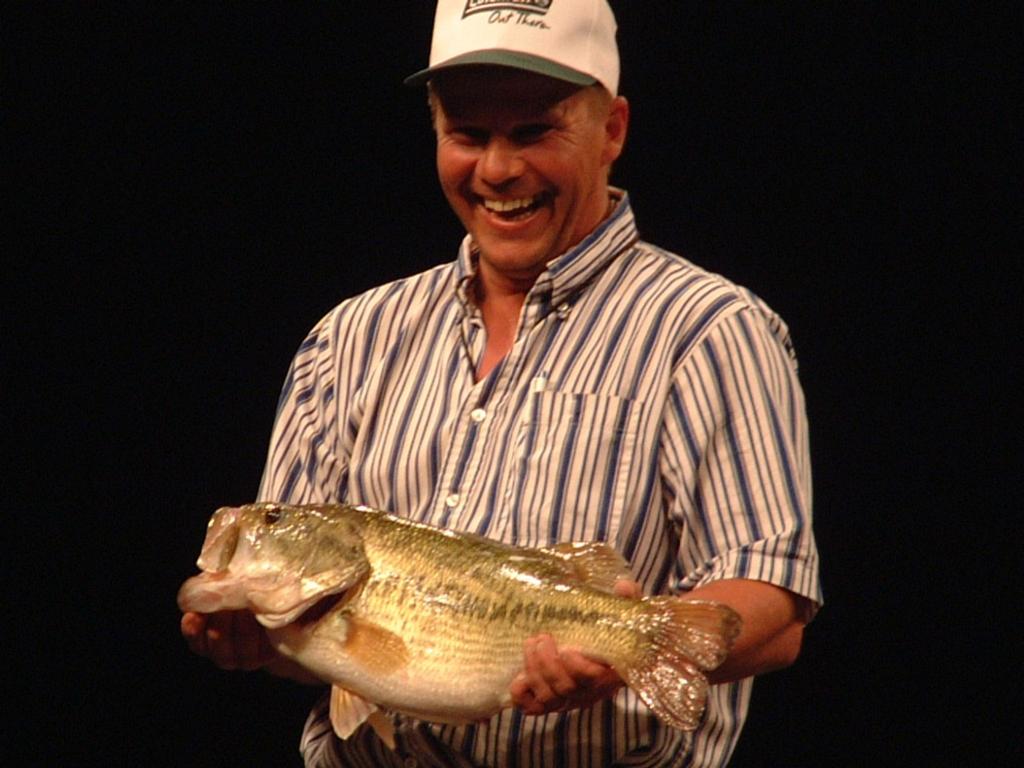 Randy Kelly of Inola, Okla., holds up a massive 7-pound, 4-ounce bass. Kelly's fish, and overall stringer of 13 pounds, 5 ounces, was good enough to give him a commanding lead in the Co-Angler Division heading into the final day of competition tomorrow. Photo by Jeff Schroeder. Angler: Randall Kelly.
May 10, 2001 • Jeff Schroeder • Archives

7-14: Weight, in pounds and ounces, of the largest bass caught today. It was landed by co-angler Randy Kelly of Inola, Okla., and secured him a first-place total weight of 13 pounds, 5 ounces with only four fish.

6: Number of All-American appearances by each of three boaters in this week’s competition: Ray Barga of Gilbertsville, Ky., Rick Miller of Blue Grass, Iowa, and David Wright of Lexington, N.C. Said a self-effacing Wright about his six All-Americans, “Well, when you’re old, you’ve had a lot of chances to make it.”
____________________

Saving it … Boater Division leader Curt Fannin of Prestonsburg, Ky., caught his five-fish limit by 10 o’clock this morning and he was culling his stringer by noon. If tomorrow is anything like today, look for Fannin to keep rolling. He said he didn’t even go to his best fishing locations on day one. In fact, he caught all of his 11-pound, 12-ounce stringer in one spot today.

Heavy stuff … While boat #45 carrying third-place boater Ray Scheide of Cookson, Okla., and fifth-place co-angler Ron Haseker of Louisville, Ky., might have led the unofficial best-boat competition of the day in terms of standings, it didn’t win the unofficial heaviest-weight competition. Boat #45 brought in a total of 18 pounds, 14 ounces between the boater and co-angler while boat #6 carrying 19th-place boater Sam Moody of Athens, Ala., and first-place co-angler Randy Kelly sat lowest in the water with a total weight of 21 pounds, 4 ounces of fish between the two.

Is the West best? … Boater Mike Gough of Gainesville, Fla., a past FLW competitor and winner of the 2000 BFL Lake Seminole Regional, was labeled by some as one of the anglers to watch going into this tournament. But today fans were looking toward the back of Gough’s boat. Gough only mustered a 43rd-place showing today while his co-angler, Billy Dehart of Bay Point, Calif., locked in five bass for 10 pounds even to take third place in his division. Said Gough, “My partner had a limit by 8 o’clock this morning. He’s from California. I think he knows something I don’t.”

Co-anglers welcome … Today marked the inauguration of the Co-Angler Division at the All-American. It seemed to be pretty well received among the boaters and co-anglers alike. Some boaters, who would have fished solo in All-Americans past, said they were glad for the help from the back of the boat. Said boater Todd Tucker of Moultrie, Ga., whose co-angler partner, Rob Sierschula of Huber Heights, Ohio, outfished him by 6 ounces, “I do like this co-angler format. It helped me out for tomorrow.”

Repeat after me: Five, you stay alive. Six, you hit the bricks … All 50 boaters weighed in fish today except one, Dave Krantz of Albany, Ga. The reason wasn’t because he didn’t catch any, either. On the contrary, in a sense, he caught more than he should have. Krantz’ weight was disqualified today because he brought six fish to the weigh-in. While he apparently had a good stringer in his livewell, none of it counted because of the extra fish, which he conceded was a mental mistake. “I’m going to lose some sleep over this,” he said.

“I can’t sleep.”
– Randy Kelly, excited about his big bass, responding after weighmaster Charlie Evans suggested that he might be able to sleep through tomorrow’s fishing and still come away with a big finish.

“The only thing we don’t do is tuck them into bed at night.”
– Evans, describing how All-American competitors enjoy an all-expenses-covered tournament, which includes hotel, transportation and fishing from fully outfitted tournament Ranger Comanches.