And then there were five … 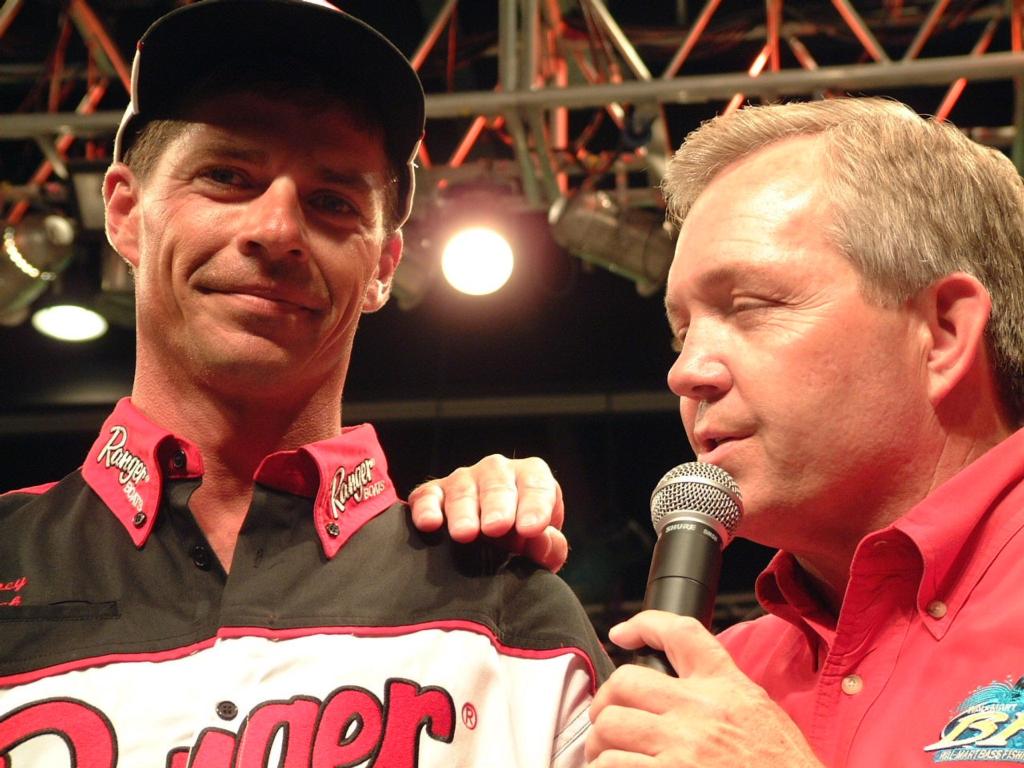 Hardwick, Fitzpatrick, Redwine, Coble and Truax will fight it out for first place and $100,000 in prize money in tomorrow’s 2001 Wal-Mart BFL All-American finals

HOT SPRINGS, Ark. – Rodney Hardwick of Connersville, Ind., used a two-day catch of 22 pounds to grab the top spot heading into finals of the Wal-Mart BFL All-American on Saturday. However, with a top prize of $100,000 on the line, Hardwick acknowledged that he probably won’t get a good night’s rest this evening.

“The nerves are shot. There won’t be any sleep tonight,” said Hardwick of his growing anxiety. “I’m trying not to think about the money. I have to keep my mind focused on the game, get good hook-ups tomorrow and get the fish in the boat. But there are no guarantees.”

Hardwick said that he expects a shoot-out tomorrow given the quality of anglers remaining in the tournament.

“Obviously, these guys are all good fishermen or they wouldn’t be here,” he said. “I wasn’t even sure I’d make (the cut) today. I lost a 4-pounder early and I thought it wasn’t meant to be. But somehow, I made it.”

However, despite a healthy dose of apprehension heading into the finals, Hardwick believes he has as good of a chance as anyone to finish in the top spot.

“All of these guys seem to be on good fish. But everyone starts at zero tomorrow,” he said. “I caught more fish today than I did yesterday and hopefully it will stay that way. I’m on two different patterns that seem to be working. And as long as I keep my mind focused, I think I have a good chance.”

Second-place qualifier Roger Fitzpatrick of Connersville, Ind., also believes he has a good shot to take home the title.

“I feel pretty confident right now,” said Fitzpatrick, who recorded a two-day total of 19 pounds, 9 ounces. “I caught 14 keepers today and as long as it doesn’t rain too hard tomorrow, I think I should be in good shape.”

Fitzpatrick said that whatever happens tomorrow, he will always cherish the memories of making the top-five.

“It feels great,” said Fitzpatrick, who believes that an 11-pound stringer will win the tournament. “This is a dream come true for me.”

Paul Redwine of Crab Orchard, Tenn., grabbed the third spot heading into Saturday’s finals with a two-day catch of 18 pounds, 5 ounces. Perhaps the calmest of the final qualifiers, Redwine said that he isn’t changing his strategy one bit come tomorrow.

“I’m going to do the same thing I’ve been doing the past two days,” he said. “It’s exciting to be here, but I need to stay focused.”

Jeff Coble, winner of the 2000 Red Man All-American, said that he needed to make some changes if he wanted to entertain any thoughts of winning the championship.

“I’m going to have to fish better tomorrow than I have in the past two days if I want to win this,” said Coble, a native of Henderson, N.C. “It’s going to be a struggle. I haven’t hooked a 4-pounder this entire tournament. And I haven’t cracked 11 pounds, which is what I think you’re going to need to win the championship.”

However, Coble acknowledged that he was thankful just to make it into the top five.

“I’m just relieved to have qualified. I thought I had no chance,” said Coble, who thought his 18-pound, 5-ounce stringer was going to fall about 20 ounces short of the cut off. “But the good thing about this tournament format is that I can put all of my past mistakes behind me now. We all start from zero. And with 45 fewer boats on the lake tomorrow, I think I’ll have a pretty good shot as long as I stay focused.”

Claiming the fifth and final spot was David Truax of Beaumont, Texas. However, qualifying wasn’t nearly as easy for Truax as it was for the rest of the final-five contestants. Truax, who represented the first angler to be dethroned as soon as any other angler bested 18 pounds, 5 ounces, spent more than an hour watching his fellow competitors come precariously close to booting him out of the tournament. But in the end, he made it.

“That is the longest anyone has ever been on the `bubble’ in any tournament I can remember,” said Truax. “I thought there was no way that I’d make it. But I guess miracles do happen.”

However, unlike the other anglers in the finals, Truax didn’t seem nearly as confident regarding his chances in tomorrow’s finals.