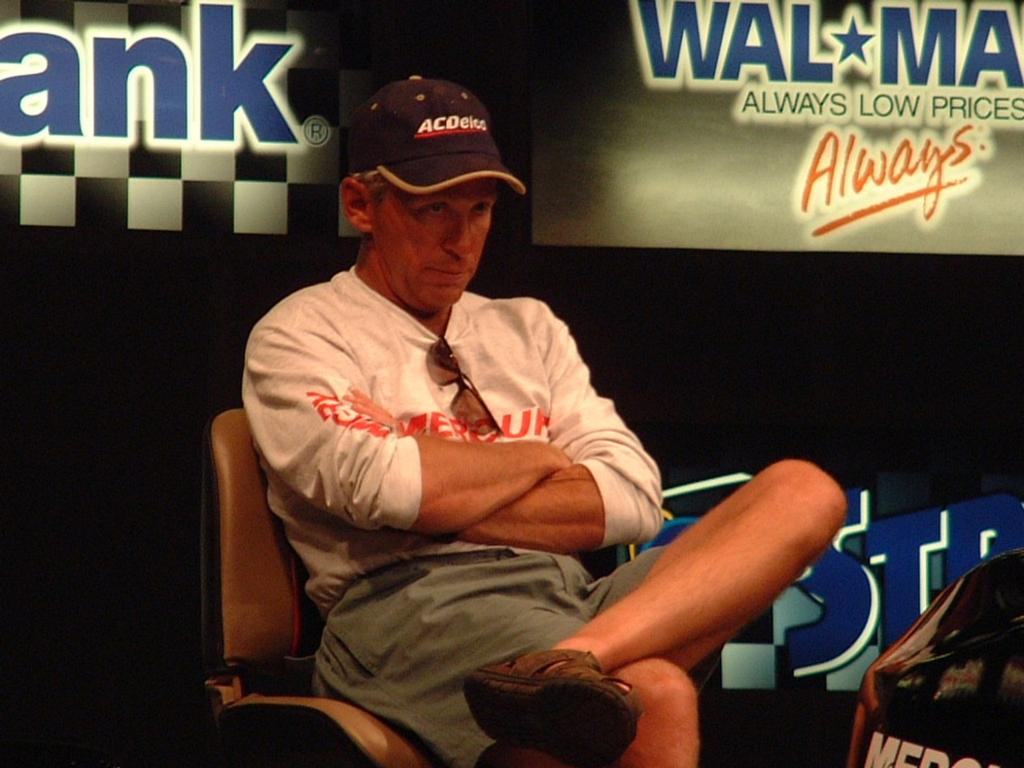 Boater David Truax of Beaumont, Texas, appears to be lowering his competitors' weights by the force of sheer will from his tenuous position in the hot seat of fifth place. Photo by Jeff Schroeder. Angler: David Truax.
May 11, 2001 • Jeff Schroeder • Archives

A truly close call … It was a tight bunch today hovering around the fifth and last qualifying spot for tomorrow’s Boater Division finals. Paul Redwine of Crab Orchard, Tenn., Jeff Coble of Henderson, N.C., and David Truax of Beaumont, Texas, established the third- through fifth-place positions early during the weigh-in. Each of them weighed in exactly 18 pounds, 5 ounces of fish. With about two thirds of the field yet to weigh their fish, however, it looked like at least one of them would easily get bumped out of the top five. Truax, by virtue of a tiebreaker, would have been the first one to go. But, one by one, boaters failed to top 18-5. Truax squirmed in the hot seat as he watched the procession of anglers. When Allen Cagle of Winter Haven, Fla., yesterday’s second-place finisher and the last real threat to make the top five, finally brought his five fish to the scale, it looked like it was over for Truax. But when weighmaster Charlie Evans read Cagle’s weight at 18 pounds, 3 ounces, a gasp of astonishment rose from the audience and Truax slumped in his chair with relief. “I only caught six fish today,” Truax said in disbelief during the tense weigh-in. “And I caught two in the last hour, including a 3-pounder for my last fish. If I get in, it’s because of that one.”

Ready for a repeat? … Coble, last year’s All-American winner, couldn’t believe he made it into tomorrow’s finals either. “I still really don’t think I’ve got a chance,” he said early during the weigh-in. In fact, yesterday Coble said he was pulling for fellow North Carolinian David Wright, who placed fourth on day one, to take the trophy. He was singing a different tune, however, at today’s end when it became apparent that he’d made the cut. Evans asked him if he thought he could come away with a repeat victory at the All-American, which nobody has ever done before. “Well, maybe we’ll change that tomorrow,” Coble said. “But I’m going to have to fish better.”

And the most gracious boater award goes to … While Aaron Wehmeyer of Carterville, Ill., stood onstage as the leading co-angler with a two-day weight of 14 pounds, 5 ounces for most of today’s weigh-in proceedings, it was almost a foregone conclusion that he was destined for runner-up. He and everyone else knew that yesterday’s leader, Randy Kelly of Inola, Okla., had yet to weigh in. Said Wehmeyer, “I `bout fell down when (Kelly) came in with that 13 pounds yesterday.” To be exact, Kelly came in with 13 pounds, 5 ounces on day one, so far outdistancing the rest of the field that it would have taken a major collapse on his part to miss victory today. Kelly did not collapse. He weighed in four fish at 6 pounds, 15 ounces to push his two-day weight to an astonishing 20 pounds, 4 ounces and claimed the win. But Kelly was quick to point out that he didn’t do it alone. Bob Lucas of Basehor, Kan., was the only the boater not to weigh in any fish today. The reason: Lucas was Kelly’s partner today and he spent the entire day giving up his own fish to Kelly so that the co-angler would be assured victory. Accepting his trophy, a grateful Kelly choked back tears and said, “The guy sacrificed his fishing today, and he didn’t have to do it. Without Operation Bass making the (co-angler) format the way they did, I wouldn’t be here.”

Ouch! … Eric Grigg of Shelby, N.C., had the tables turned on him today. He lost two hours of fishing time because he snagged his own hand with a jig hook and had to go to the hospital and have it removed. Undaunted by the mishap, “I went right back out there and caught five fish,” he said. He managed to place 25th in the Boater Division. Said his co-angler partner, Michael Coleman of El Dorado Springs, Mo., “You know, Eric’s hard to get in the net.”

13: Weight, in ounces, of the smallest stringer – consisting of just one fish – brought to the scale today. “It looks like a guppy,” teased Charlie Evans. “I was proud to get it, too,” responded boater Bob Hardin of Albany, Ga., who caught the underwhelming bass.

5-15: Vast difference, in pounds and ounces, between Randy Kelly’s hefty first-place weight of 20-4 and Aaron Wehmeyer‘s runner-up weight of 14-5.

2nd: Place that Kelly would have reached had he been fishing the Boater Division today.

“Here on the co-angler side is where dreams are made of.”
– Charlie Evans, referring to Randy Kelly, who took home $55,000 in winnings after a mere $450 investment in various entry fees to make the All-American.

“She’s my fishing sponsor.”
– Aaron Wehmeyer, on his fiancee, expressing what is probably the most accurate take on the business side of tournament fishing.

“At about 12:30, I was down to plan Y. So I sat down and had lunch. Then I caught my second one in the middle of my sandwich.”
– Co-angler Billy Dehart, who said his fishing came apart today. He dropped from third place on day one (10 pounds even) to 11th place today (2 pounds, 3 ounces today for a two-day total of 12 pounds, 3 ounces).