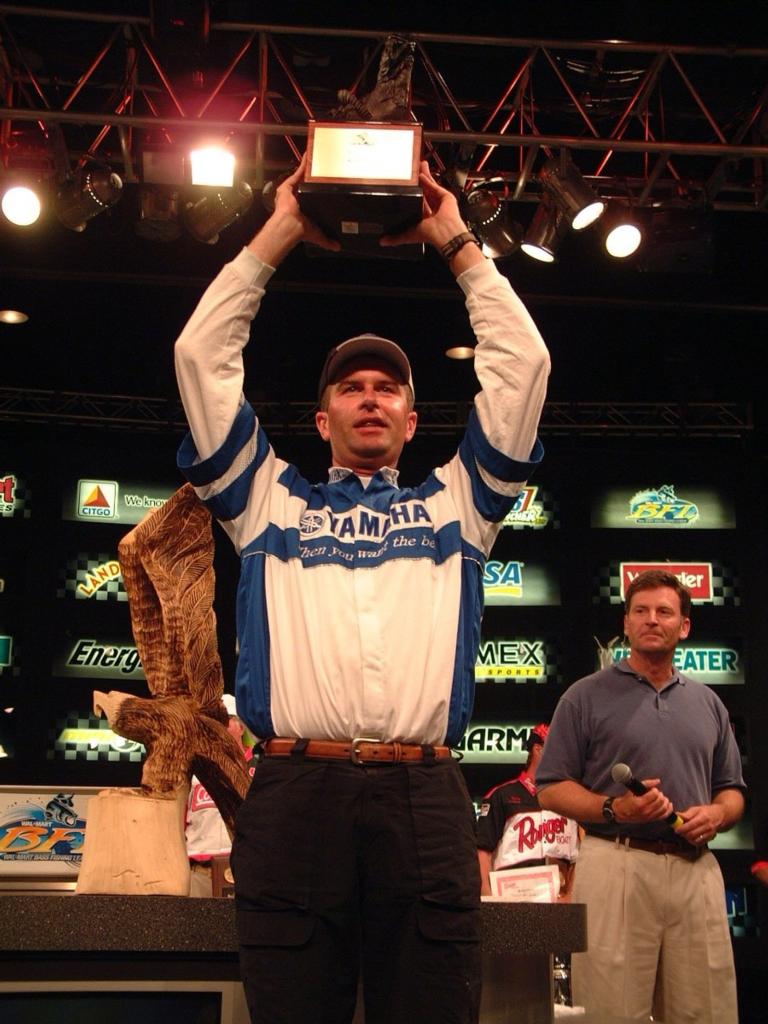 HOT SPRINGS, Ark. – Jeff Coble didn’t think he had a big enough catch to make it to the finals. Coble also thought it would take 11-pound stringer to win the championship. And realistically speaking, Coble thought it was nearly impossible for someone to win back-to-back championships at the All-American – one of the most difficult and grueling bass fishing tournaments in the country.

Luckily for Coble, he was wrong on all three accounts.

Bolstered by a 10-pound, 1-ounce stringer, excellent deep-water fishing acumen and an unrelenting desire to fight until the bitter end, Coble took home the most vaunted prize on the Wal-Mart BFL Tour – the All-American championship.

Even as he was handed the first-place trophy and a check for $100,000, Coble continued to be in awe of the situation.

“It feels great. This was pretty hard to do, winning back-to-back championships,” said Coble, a native of Hendersen, N.C. “I think I was pretty lucky.”

Coble, who used a combination of jig fishing and crankbaits to capture the championship, said that a trip to Lake Hamilton last spring helped secure the victory.

“The thing that won the tournament for me was when I came down here last March,” he said. “I was fishing with a friend of mine and we found this big rock next to a creek channel. I caught a lot of fish at that spot and I used it throughout this tournament. It’s the type of spot we’d kill to have back home.”

The strategy of Coble’s fellow competitors as well as the tournament format also seemed to play into the hands of the two-time champion.

“I noticed that most of my fellow competitors were fishing shallow, so I went deep,” said Coble, who has qualified for five All-American tournaments. “I thought there would be a lot of boat traffic close to the shore and I wanted to avoid that.

“The other reason I won was that there were 45 fewer boats on the water on the final day,” said Coble, referring to the other competitors that already had been eliminated. “Finally, I could fish anywhere I wanted to. And that really helped me.”

Despite “struggling” in the first two days of the tournament, Coble said that he executed nearly flawlessly on Lake Hamilton today.

“I definitely struggled the last two days and I was pretty lucky to get (to the finals),” he said. “Today was easily my best day. I fished well. But even if I had lost today, I still would have felt good about my performance.”

And did he really think it was possible to win two All-American championships in the row?

“I guess if you get the right situation and everything goes well for you, you have a chance to do something like this,” he said. “The reason it probably hasn’t happened before is that the people who usually win these things, go on to do different things and join different fishing circuits. As for me, I kind of just keep hanging around.”

One step behind, again

David Truax, who finished one place behind Coble in the semifinals, undoubtedly had a strong sense of deja vu after the final weigh-in. Using a catch of 8 pounds, 9 ounces, Truax finished behind Coble for the second straight day, claiming second place and a check for $20,000.

Truax, the fifth-place semifinal finisher who had to sweat out the final 45 minutes of yesterday’s weigh-in hoping that no other angler would top his 18-pound, 5-ounce stringer, said he was both relieved and disappointed by the final outcome.

“It was a bittersweet weigh-in,” said Truax, a native of Beaumont, Texas. “I didn’t think that I was going to make the finals at all. But coming in second place kind of hurts … although $20,000 kind of takes the sting out of it.”

Truax said the difference between second place and the championship was little more than a 3-pound fish.

“I just needed one 3-pounder today and I just didn’t get one,” he said. “One kicker is all I needed.”

Despite the tough loss, Truax said he didn’t second-guess his performance.

“I only lost one fish in three days so I can’t really blame anything,” he said. “I fished well, but I guess that’s the way it goes. Maybe next year.”

Roger Fitzpatrick, who took home third place and a check for $10,000, said he was happy with his performance.

“This has been an outstanding week,” said Fitzpatrick, who recorded a final catch of 8 pounds, 8 ounces. “It’s a dream come true.”

Rodney Hardwick, who thoroughly entertained the crowd with a video clip showing a 15-minute battle with a largemouth bass stuck in a brush pile under a dock, took home fourth place with a total catch of 6 pounds, 4 ounces.

“I had a lot of confidence going into the finals, but it just didn’t work out,” said Hardwick, a native of Connersville, Ind. “It’s been a great tournament and Arkansas has been very nice to me. I couldn’t have asked to be around a better group of people.”

Rounding out the finals in fifth place was Paul Redwine of Crab Orchard, Tenn. Redwine, who netted $7,000 in prize money, recorded a final catch of 2 pounds, 14 ounces.

“I think the storm that came through last night really hurt my fishing,” he said. “I only got three keeper bites all day. But overall, I’ve had a lot of fun.”