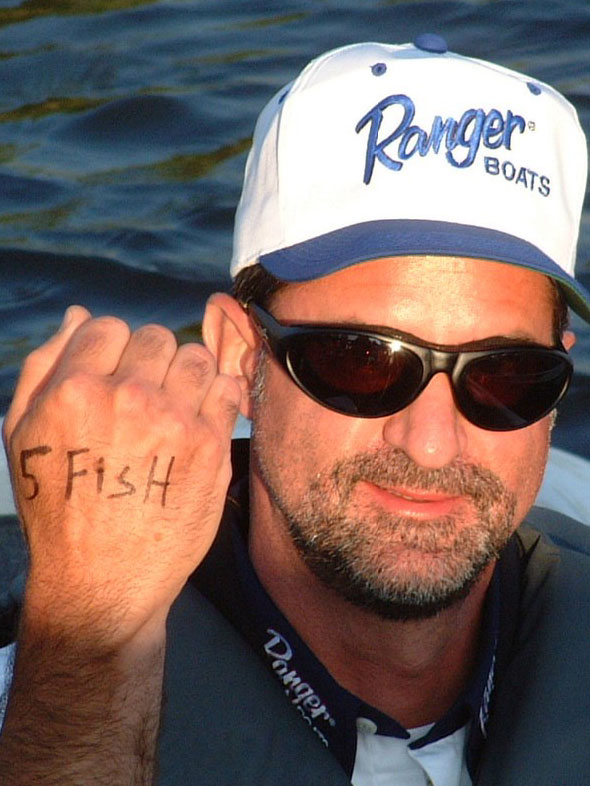 Boaters fishing to make the cut, co-anglers fishing for all the marbles

SHREVEPORT, La. – It’s day two at Cross Lake and the 100 boaters and co-anglers fishing in the 2002 Wal-Mart Bass Fishing League All-American couldn’t be more pumped up. Virtually every competitor in both divisions remains in contention – even those who zeroed Thursday – because low catch weights yesterday mean that a big day today will give anglers a good shot to go from worst to first.

The co-anglers are finishing their two-day competition today, and one of them will walk away with the top prize of $50,000. Ives has a good jump on the competition – he’s almost 2 pounds in front of second-place Gary Fowler – but you can bet that he’s not sitting too comfortably with just 6 pounds, 3 ounces under his belt. Cross Lake harbors Florida-strain bass that go as big as 10 pounds – co-angler Gary Seachord caught one in practice Wednesday – and just one of those would likely send any single co-angler over the top.

For the boaters it’s a battle to make the top-10 cut into Saturday’s finals. The formula that generally works in determining the cut weight is to double the 10th-place angler’s weight from day one and subtract a pound or two, depending on the conditions. Tenth-place boater Robert Ewick landed 4 pounds, 6 ounces Thursday, so that should put the cut weight around 8 pounds or a little less. Shaffer and second-place Greg Gutierrez are sitting pretty as the only guys who’ve already accumulated over 10 pounds. The same should be true for the rest of the top five down to Ricky Smith, who landed 8-3. But everyone else’s weight drops off dramatically after that and it’s going to be a dogfight among 95 anglers to nudge into those sixth- through 10th-place spots. Don’t be surprised if a boater spends a lot of time targeting that one big bite to gain the edge.

On the other hand, just catching a limit of five small fish could be the key to victory. The 14- to 17-inch slot limit gave anglers fits Thursday, and figuring out how to fish around it was the main concern of most competitors at the dock Friday morning.

Conditions are warm, muggy and stable in Shreveport. Apparently, so is the water temperature, which seems to have slowed the bass bite somewhat this week. Ninth-place pro Matt Martin reported water temperatures in the 80s Thursday, saying, “The fish just don’t like it that warm.”

Still, there are Florida bass in this lake, and they wouldn’t have it any other way.