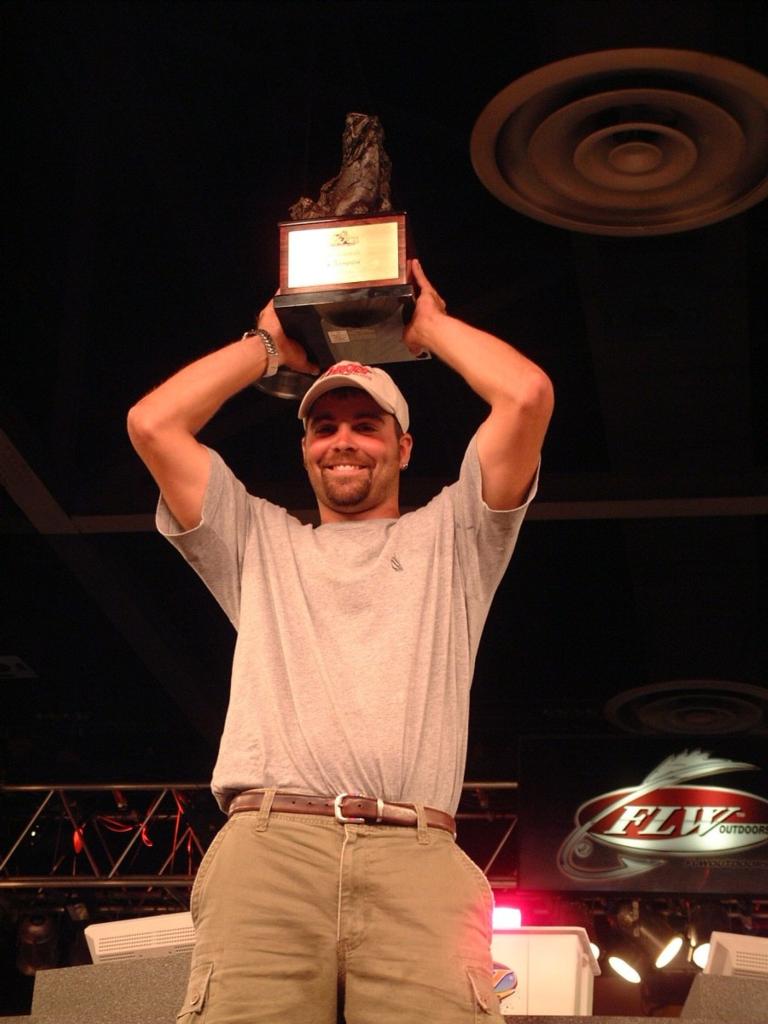 SHREVEPORT, La. – As far as Jeremy Ives is concerned, the 2002 Wal-Mart Bass Fishing League All-American was over Thursday. Ives, the Co-angler Division leader after day one, only caught one bass worth 1 pound, 8 ounces Friday, but it was enough to keep him on top and land him his first victory check.

“It feels weird, it really does,” said Ives, a 28-year-old land surveyor from Burgaw, N.C. “But when I left home to come here, I felt like I was going to win.”

Ives collected the $50,000 winner’s check on the shoulders of the hefty 6-pound, 3-ounce sack that he weighed in Thursday. His two-day weight of 7-11 narrowly edged out runner-up Bruce O’Brien of Normal, Ill., with a 7-3 total, by 8 ounces for the win.

Ives credits his success at this tough-bite tourney to his bait. Both days he used a Hawg Caller log crawler colored black with red flakes.

“I really think it was the bait,” he said. “Neither one of my partners both days caught a fish.”

He also thinks the similarity between Cross Lake and his home waters in North Carolina helped him out. He had success – catching four bass over two days when many co-anglers struggled just to land one – fishing cypress trees and grass in about 3 feet of water.

“Cypress trees – at home that’s all we have,” he said.

With $50,000 in his wallet and inclinations to move up the ranks into the EverStart Series and FLW Tour, Ives became the hero this week after barely qualifying for this All-American. At the Lake Chatauqua, N.Y., BFL Regional in 2001, he finished in eighth place – the last qualifying spot – despite laying a goose egg on the final day.

Water under the bridge, as they say. Now the young Ives has his sights set forward on the cash and his tournament fishing career, which is a mere two years old.

“This might be my break. I’d like to fish the EverStart as a boater,” he said. “With the money, hopefully I can go to college and get my (surveyor’s) license and run my own crew. But I’m calling my girlfriend because it’s probably all hers anyway.”

Fowler also won the co-angler big-bass award and $500 with a 4-pound, 4-ounce largemouth he caught Thursday.

The co-angler Yamaha circuit points leader award went to T.J. Edwards of Waldron, Ind. Edwards collected $5,000 for being the highest-placing divisional champion at the All-American. He won the Hoosier Division standings in 2001 with 1,068 points and finished ninth at Cross Lake this week.