Tony ‘The Big Fish Magician’ Christian does it again. He leads the All-American with 8 pounds, 14 ounces, which included this 6-pound, 2-ounce lunker he weighed in to the amazement of FLW Outdoors' Charlie Evans. Photo by Rob Newell. Angler: Tony Christian.
May 29, 2003 • Rob Newell • Archives

MOBILE, Ala. – Tony Christian of Hull, Ga., is working his big-fish magic again. He took the first day’s lead in the 2003 All-American on the Mobile Delta with two bass weighing 8 pounds, 14 ounces. And – in what has become standard operating procedure for Christian – he caught the big bass of the day – a 6-pound, 2-ounce largemouth, which is an absolute behemoth for the Mobile Delta.

As if five BFL wins, a BFL Regional win, an EverStart victory and being the current points leader in the EverStart Series Eastern Division – all in just two years – was not enough, Christian now has his lunker-bent mind on a $100,000 All-American title.

When word on the flooded bayous of the Mobile Delta was that only small fish could be caught, Tony “The Big Fish Magician” Christian never batted an eye.

“I think someone will catch a 6- or 7-pounder here,” said Christian before competition began to the bafflement of all that heard him say it. Of course, Christian was only speaking for himself.

“Hey, I could have just as easily not have gotten those two bites and zeroed,” he said.

But then again, that is Christian’s style – hero or zero – and he continues to be the hero.

He reported that he caught the two fish just 15 minutes apart. “I really never worked the area hard either,” he said. “That one pass was all I made, and then I kept on fishing down the bank.”

Christian said he is actually thinking about breaking stride and fishing for smaller fish tomorrow. “I think that place I caught those two today has some more big ones in it, and I would like to save them for the big show on Saturday,” he said. “If I could catch just a couple of keepers tomorrow somewhere else, I think I could stay in the top 10.”

Actually, Christian may not have to catch a fish tomorrow to stay in the top 10. The Mobile Delta was a stingy swell of water today. A mere 4 pounds, 3 ounces is the top-10 cut mark on the pro side, only three limits were caught and 10 pros never boated a keeper today.

If things do not improve tomorrow, Christian just might make the cut on his 8-pound, 14-ounce catch.

Other leaders are dinking for dollars

While Christian is fishing for just a couple of bites a day, other anglers are employing the opposite strategy: dinking for dollars.

In the dinking-for-dollars game, anglers hedge on catching numbers of fish over quality fish. The idea is to make the top 10 with a limit of just-keeper-sized bass each day. 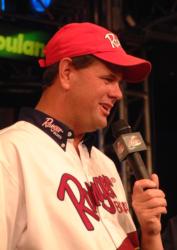 So far the strategy is paying off for kind-of-local angler Gary Brown of Gautier, Miss., who weighed in a five-fish limit today for 7 pounds, 2 ounces to hold down second place.

Brown caught his keepers on a buzzbait and a local favorite, a Snagless Sally in blue bruiser.

“I caught three pretty quick in Bay Minette and then the bite died,” he said. “I just started junk fishing after that and caught three more.”

Brown is playing the small fish game with a calculated plan. “I’ve got one spot I am saving,” he said. “I went in there in practice and had some good bites. I did not go in there today and would like to avoid going in there tomorrow. I want to save it for Saturday.”

Brown’s plan tomorrow is to return to Bay Minette. He said if he gets desperate, he has no problem with going to his “ace in the hole” hole and getting enough to survive the cut.

Butch Kartesz of Roanoke, Va., is in third place with five fish that weighed 6 pounds, 6 ounces. Like Brown, Kartesz is looking to dink his way to the $100,000.

Kartesz is working a half-mile stretch of bank way up the river. “I feel really positive about tomorrow,” he said. “There is no one else fishing this stretch, and I think there are still some fish there.”

The dinking game is all about strategy. When fishing is as tough as what the Mobile Delta is dishing out, catching one too many bass from a single area to make the cut could be a costly error for the last day. 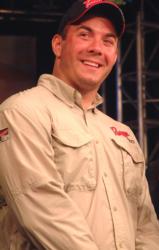 But at the same rate, laying off too early and not making the cut could be twice as painful. It’s a game of ounces.

“My goal is to catch four bass tomorrow,” said Kartesz. “If I catch three pretty quick, I will lay off the area and try to scrounge up my fourth one elsewhere. But if the bite is slow and it takes me all day to get three, I’ll stay right there until I get my insurance – number four.”

Sam Moody of Athens, Ala., is in fourth place with the day’s only other five-bass limit that weighed 6 pounds.

“My main concern is that there are two other boats in the area and we are all in the top 10,” Moody said about his fishing spot. “We have beaten what few fish are in there to death. It’s an obvious area because its one of the few places that has clearer, stable water.”

Moody would like to catch three fish tomorrow and then leave the area to go practicing for Saturday.

“I would feel comfortable with three fish tomorrow – two if they were bigger – but three if they are small,” he said. “I don’t think the area I’m in has the potential for a win, so I would like to look around tomorrow if the Lord blesses me and I get a few fish quick.”

The rest of the best

Rounding out the top 10 after day one are Frank Eslinger of Lagrange, Ga., in fifth with 5 pounds, 5 ounces; Billy Bowen of Ocala, Fla., in sixth with 4 pounds, 11 ounces; Tim Peek of Sharpsburg, Ga., in seventh with 4 pounds, 7 ounces; and, tied for eighth, all with 4 pounds, 3 ounces, are Robert Cruse of Broken Arrow, Okla., Albert Dobson of Gulfport, Miss., and Bobby Lane of Lakeland, Fla.

All tied up in the Co-angler Division

If the Mobile Delta was tough on the pros, it was brutal on the co-anglers. Only 23 co-anglers weighed a fish today. A top-10 cut is nonexistent on the co-angler side because their competition ends tomorrow. The co-angler with the highest two-day total will walk away $50,000 richer.

Howard landed two fish today by flipping behind his partner. But it was not just two luck bites; he has put some thought into his approach.

“I was pretty much flipping the same bait as my pro, but I have it in a unique color that I have a lot of confidence in,” Howard said. “I fished several tournaments in the Gulf Coast region this year to prepare for this and one of the anglers I fished with turned me onto this color.”

Howard said he would be more inclined to reveal the color tomorrow.

In addition, Howard also pitched his bait on braided line, and for good reason. “I want to make presentations that my pro is not making,” he said. “And that means pitching back into to places he has not put a bait in – behind trees, bushes and vines – I am not afraid to put that bait anywhere on braid.”

Lugar caught three bass today by fishing a little slower than his partner.

“We were flipping and I was making one pitch to his two,” he said. “Every fish I caught, including a few short fish, bit the bait after it had been there for a few seconds. I never got bit on the initial drop; I really had to soak it. If my partner is flipping tomorrow, I’ll stick with the same game plan.”

Rounding out the top five in the Co-angler Division after day one are Chris Coates of Westmoreland, Tenn., in third with 4 pounds; James Darcey of Lake Worth, Fla., in fourth with 3 pounds, 12 ounces; and William Bryant of Rochester, N.Y., in fifth with 3 pounds, 6 ounces.