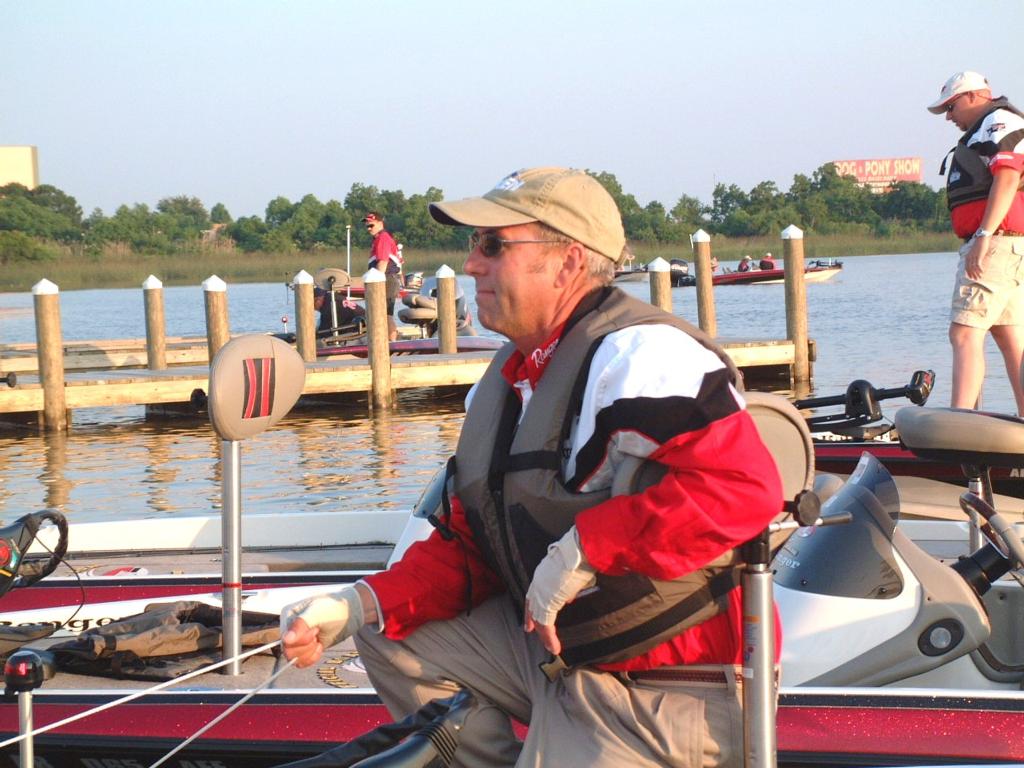 David Wright of Lexington, N.C., makes some last-minute preparations before take-off on day one of the All-American. Photo by Rob Newell. Angler: David Wright.
May 29, 2003 • Rob Newell • Archives

MOBILE, Ala. – High, muddy water is reigning supreme at the Mobile Delta this week as an elite field of 90 All-American qualifiers put their fishing wits to work on the massive Alabama waterway.

Although the water levels at the Chocolotta Ramp on the Mobile Causeway do not look abnormally high, the water coming down the Alabama, Tombigbee and Mobile rivers is spilling over their banks.

Many of the contestants that practiced for this prestigious event say that the water is up at least 5 feet higher than when they were here before the cut-off period two weeks ago.

Normally, the Mobile Delta provides an enormous amount of fishing terrain, given the number of basin lakes, backwater sloughs, oxbows and creeks connected within the system. But an influx of high, muddy water coming from the central part of the sate has infiltrated most of those basin lakes and backwaters, rendering much of the Delta unfishable.

As a result, anglers are saying that it will be difficult to catch five-fish limits consistently.

After their single official practice day on Wednesday, some of the All-American contestants commented about conditions:

David Wright of Lexington, N.C. – Wright has been to a few All-Americans in his BFL career – seven to be exact. Wright would like to add an All-American win to his career so he invested a few days of practicing at the Delta before the cut-off.

Like many competitors, Wright believes a two-day total of 10 pounds will put an angler in the pro-side top-10 cut. “Ten will make it, but you might even squeak in there with eight,” he added.

Billy Bowen of Ocala, Fla. – Bowen is a pro on the FLW Tour who cut his teeth at the BFL level. He has been to two All-Americans and is known as a fisherman who targets big fish with the flipping technique. But Bowen said he is going to target small fish this week.

“After my day of practice, I re-rigged all of my tackle and downsized everything – line, lures, weights,” Bowen said. “I pre-practiced here for seven days, and 90 percent of the stuff I found is unfishable, so I am having to go with plan B.”

Bowen believes that the high water in the top of the delta system is going to keep a lot of fishermen close by in the lower end.

“There is more fishable water down here on this end,” he said. “Once this water gets to Mobile Bay, it all flattens out. The water around here is still in the banks. So I think a lot of anglers will stay close and try to scrape up a limit of small fish.”

“The farther north you go, the higher it gets,” he noted. “Best I can tell, most of the water from about 30 miles up and above is unfishable because of the mud and high water. I can’t even find the bank up there. There are raccoons, squirrels and possums trapped up in the trees. It’s kind of weird, really.”

Bowen added that he had three bites in one place that he is excited about.

J.T. Kenney of Frostburg, Md. – Kenney is a pro on the FLW Tour who is fishing his first All-American. When compared to an FLW event, Kenney says the All-American is an all-or-nothing deal.

“We had one day of practice; the tournament days are only 7 hours; we are allowed to take a limited amount of tackle – so this tournament is about commitment,” he said. “You don’t have time to adapt. You go do what you planned to do, and if it works, great, if not, well, you are kind of dead in the water.”

On his practice day everything went as planned. “I got in one area and had about 10 bites,” he said. “I was scared to swing on them, so I have no idea what they were, but I am thinking 10 bites from anything out here right now must be good.”

Tony Christian of Hull, Ga. – Christian has been the talk of the town in FLW Outdoors tournaments. In 2002 he won five BFL events including a regional. He also posted an EverStart win to his resume in 2003.

Despite all of the talk about small fish and small limits, Christian in not giving up on his well-earned reputation as a big-fish master.

“I checked my ‘big fish’ creek and got two bites,” Christian said. “I’m pretty excited about that. I am not giving up on big ones. I think there are some big fish in this place.”

Christian’s big-fish confidence provided some humor during a conversation with Wright at last night’s reception and dinner put on by FLW Outdoors.

“I bet somebody catches a 6- or 7-pounder here,” said Christian.

“Shoot, I know there’ll be at least one weighed in, because I’m going to catch it, ” Christian retorted jokingly.

Jesse Draime of Long Beach, Miss. – Draime was the BFL Gulf Coast points leader in 2002 and 2003. He knows a thing or two about Gulf Coast fisheries including the Mobile Delta.

Draime has fished the Mobile Delta off and on for 20 years, and he says he has never seen the water this high.

“What is amazing me is how much current is way back in the woods,” he said. “We have had high water before, but it usually just backs up. Now it has broken through the lakes and is flowing everywhere.”

According to Draime, the real high water starts at the railroad bridge, which is about 15 miles north of the takeoff.

“That bridge kind of acts like a dam; it holds all that water up north and east of here,” he said. “Below the bridge, the water can spread out and it does not seem as high.”

What Draime is concerned with more than anything is water color. “Mixing water color is bad,” he said. “I stay away from places that have different water colors all mixing together. I like the water color to be consistent.”

Initially Draime thought 20 pounds would make the cut. Now he is thinking 12 pounds will do it.

Gary Brown of Gautier, Miss. – Brown is another well-known Gulf Coast tidewater angler who could be considered a local favorite in the event.

“Usually you have a 100 miles of fishable water in the Mobile Delta; now maybe the last 10 miles are fishable,” said Brown.

Brown thinks that the 2003 All-American will turn into a small-fish battle because so many anglers are going to be forced to fish in the southern portion of the Delta where small fish are abundant.

“The quality fish in this system tend to live way up in the creeks and oxbows, and all of that is wiped out now,” he said. “Essentially, the quality component of the fishery has been taken out of the picture. All that is left is this area down here. And this saltwater environment is harsh on a bass; they just don’t get very big down here.”

Brown’s plan is to “dink’em” to death. “I am going to fish for small fish and try and dink my way into the finals. If I make it that far I’ll go dink’em again on the last day and hope I get a 2- or 3-pounder to go with it.”