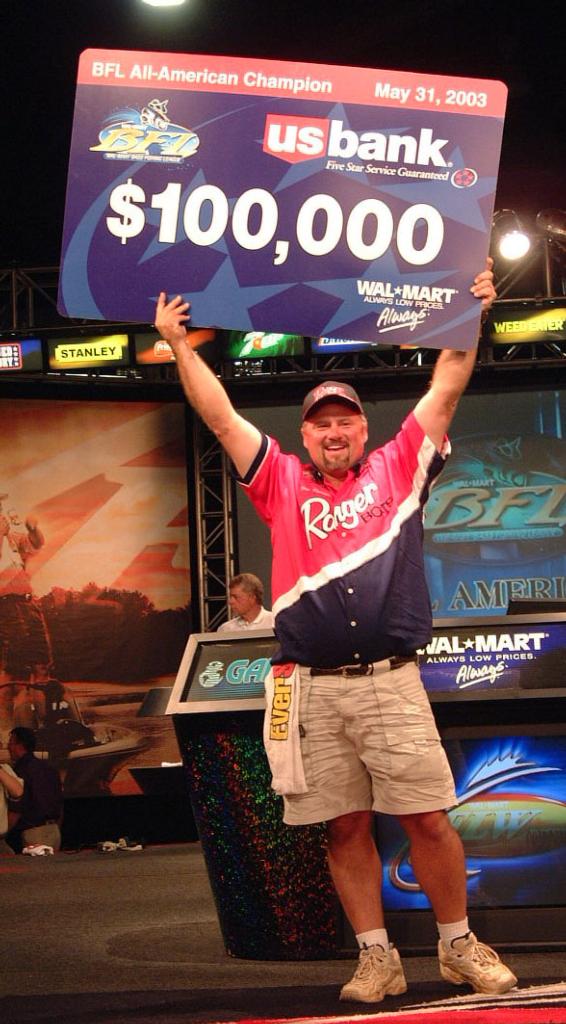 MOBILE, Ala. – Tony Christian of Hull, Ga., won the 2003 BFL All-American on the Mobile Delta Saturday. And once again, he did it in dominating fashion weighing in three bass that totaled 14 pounds, including a 6-pound, 8-ounce Mobile monster. His margin of victory was almost 8 pounds.

Shocked? Surprised? Welcome to the club.

Fishing folks, especially those that fish against Christian, still don’t know what to make of him. Winning streaks are one thing, but to win in such a dominating manner every time is astonishing.

Tony “The Big Fish Magician” Christian certainly lived up to his nickname this week. He turned in big bass of the day every day of the event including a 6-pound 2-ounce bass on day one and his lunker today. In addition, he had another bass today that weighed 4 pounds, 8 ounces.

Christian said his main strategy was to get in heavy current and fish major current breaks that fish were using as relief.

His best place, which produced his two fish on Thursday and two fish today, including the big one, was a huge drum or tank on the main Tensaw River that acted as a massive current break.

His other two areas were Hurricane creek, off the Tensaw River, and Gunnison Creek in the Mobile River.

“A lot of these guys were trying to get back in the still water places,” Christian said. “I was trying to find the heaviest current I could find and then locate something big that broke that current. In Hurricane and Gunnison, I was fishing big cypress trees that would break the current.”

So what is Christian’s secret bait? Drum roll please – a jig and spinnerbait – imagine that. Pictures of his winning lures can be seen in the photos section.

Christian does not know the name of the jig he used. “It’s a 1/2-ounces black and blue jig with a Zoom swimming chunk on it,” he said. “I bought it at Wal-Mart.”

How on fire is Christian? Here is just a sample of what happened today as told by Christian:

“I was up there fishing that big eddy on the Tensaw, where the big tank is, and I got a bite. I set the hook and the fish ran up near the tank around some barnacles and broke off. So I retied, and about fifteen minutes later I pitched up there again and got another thump. I set the hook, fought it to the boat and landed it-that was the six and a half. I go to unhook my jig from her mouth and she’s got my other jig down in her throat. It was the same fish I broke off.”

In addition to his $100,000 cash, Christian also received $10,000 from Yamaha for being a divisional points leader (Savannah) that finished the highest in the All-American, $1000 dollars for the Snickers big bass award, and a Ranger 519 Boat for winning the All-American Ranger Cup contingency.

“I think I can buy my baby two pair of shoes now,” said Christian in response to his financial windfall.

Gary Brown of Gautier, Miss., finished second with a 5-bass limit weighing 6 pounds and 1 ounce. He had the right plan but the wrong size fish.

“My plan worked out great, but what Tony did was just awesome,” Brown said. “That kind of catch on this river – even without flood conditions – is unbelievable. My hat is off to him.”

All week Brown had tediously survived awaiting his opportunity to fish for the win on Saturday.

“I went in there and caught my limit on a small buzzbait just like I thought I could,” he said. “I caught 8 keepers. I figured I would need a three-pound plus kicker to win, but as it turns out, that would not have done me much good either.”

Brown spent the day throwing a pair of buzzbaits. One was a white 1/4-ounce Stripteaser buzzbait with a white trailer, and the other was a 1/8-ounce Bulldog buzzbait with just a grub on it. He threw both baits on Berkley’s Whiplash 65-pound test braid.

During the qualifications, Brown fished in Bay Minette. But today he put all his eggs in Bayou Sara.

“Bayou Sara has got houses, yards, bulk heads, piers – hard structure,” he said. “With all this water I was trying to fish solid things that he fish could relate to.”

Bobby Lane of Lakeland, Fla., finished third with 3 bass weighing 3 pounds, 7 ounces. He fished a white 3/8-ounce FLW spinnerbait with a turtle-back blade and a white 1/4-ounce Lunker-Lure buzzbait with a gold blade all week to catch his Mobile Delta bass.

Lane was not fishing far from take-off. He spent most of his fishing time in a bay located just 5 miles east of the ramp.

“I was fishing a coontail-millfoil looking grass,” he said. “I’m not sure what is was, but it was real stringy and it was growing in about 2 to 3 feet of water. My bite was tidal influenced. The fish would only bite on certain tides.”

“This bank is about 10 miles from the launch, just below a major creek that had clearer water coming out of it,” he said. “That clearer water would run down along this sawgrass bank out on the main river and clean it up.”

Kartesz said the key was a slow fall, which is why he used the small 1/8-ounce weight.

“The bank grass made all kinds of little cuts and pockets and I just tried to keep my bait in as many of those little cuts as I could,” he said.

Quote of the day: “Gunnison Creek was my small fish place that I was going to…Wait a minute, I didn’t catch any small fish this week.” – Tony Christian telling reporters about where he fished this week.