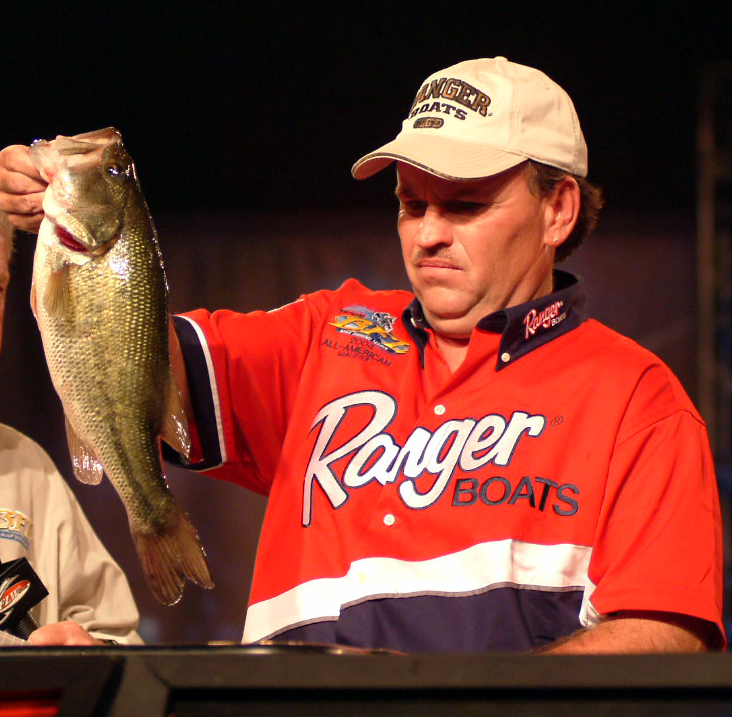 HOT SPRINGS, Ark. – The leaderboard at the 2004 BFL All-American on Lake Hamilton shuffled around today, and, when the shuffling was over, Mark Schafer of Williamstown, N.J., took the lead with a two-day total of 24 pounds, 14 ounces.

Schafer brought in the biggest stringer of the day, 13 pounds even, and now holds a 2-pound, 5-ounce lead over second place.

“I feel pretty good that my area and technique are going to hold up,” Schafer said. “I’ve been fishing one key stretch of docks near the Hatchery and it just keeps producing fish. I caught plenty again today and some bigger ones showed up.”

Schafer revealed that he is fishing a wacky-rigged Zoom Trick Worm around docks.

“I think the key to the area is that it’s a bay right off the main river; it’s not way back in a creek or pocket,” he said. “I like trying to find fish on the main lake. I think the better quality fish live out on the main lake all year, and they are moving into this one bay to spawn.”

Another plus is that Schafer has the area to himself.

“I didn’t want to compete with guys fishing obvious spawning creeks and pockets,” he added. “When I came here in pre-practice, I looked for something that was off the beaten path but still close to the main lake.”

The second biggest stringer of the day was caught by John Devere of Berea, Ky., who brought in 12 pounds, 10 ounces to move into second with a two-day total of 22 pounds, 9 ounces.

“I’m flipping and pitching a 1/2-ounce jig in 2 to 8 feet of water around docks and brush,” Devere said. “I didn’t catch near as many fish today, but the ones I did catch were bigger.”

Allen Hayes of Moody, Ala., moved into third place today with the help of a 12-pound, 3-ounce stringer, which pushed his two-day total to 21 pounds, 8 ounces.

When clouds and wind blew in for a few hours this morning, Hayes pulled out a spinnerbait and went to work.

“I had a limit by nine o’clock,” Hayes said. “They were feeding much shallower and were more aggressive in that overcast.”

Unlike other leaders that have dialed into one specific pattern and area, Hayes is adjusting to the conditions by the hour.

Dave Lefebre of Union City, Pa., continues to sight-fish and brought in 9 pound, 10 ounces today to amass a two-day total of 20 pounds, 12 ounces for fourth.

Charles Cummings of Leeds, Ala., added 10 pounds, 15 ounces to his weight total today and is now in fifth place with 20 pounds, 6 ounces.

In a tournament where a 3-pounder is something to ooh and ahh over, Miles Johnson of Beaver Creek, Ohio, made the weigh-in crowd’s jaws drop with a 5-pound, 14-ounce bass that easily took the Snickers Big Bass Award for the tournament.

“I caught her on a Carolina-rigged Brush Hog in about 12 feet of water at 10 o’clock this morning,” Johnson said.

The final take-off will be a 7 a.m. Central time at the Hatchery launch ramp.