As the Crow flies 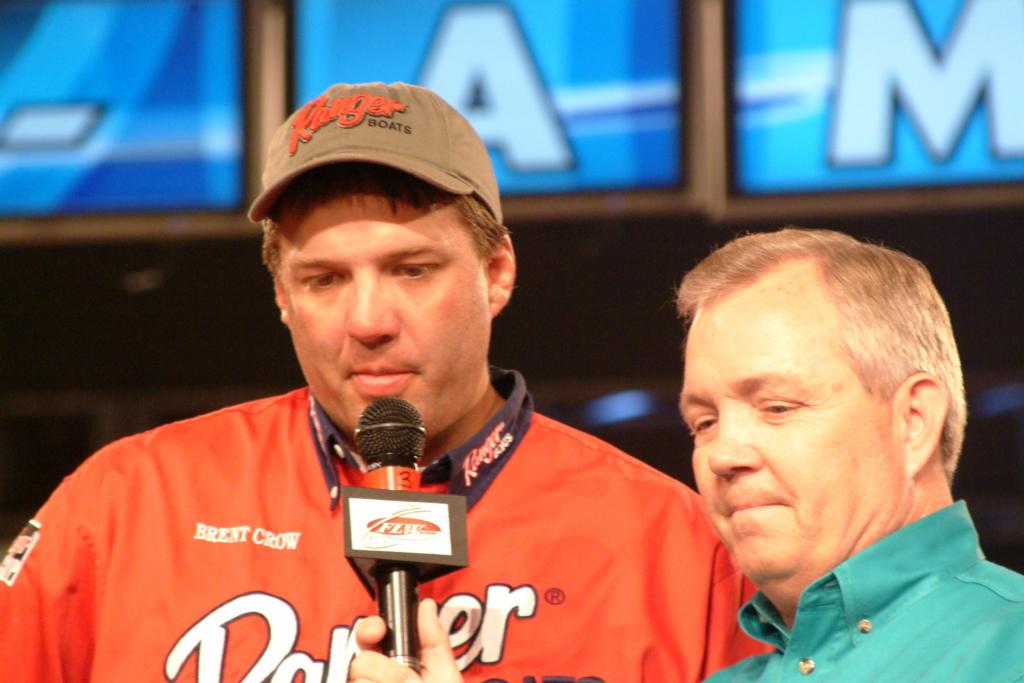 In 2002, Crow finished second in his first-ever BFL event, a Choo Choo Division tournament held on Guntersville Lake. Now, in his first-ever All-American, Crow leads the field with a five-bass catch of Ohio River bass that weighed 11 pounds, 11 ounces.

“It’s been great so far,” he said. “If it keeps going like today, it’ll be even better.”

Crow rode into the All-American on a wave of momentum after qualifying for two different regionals out of two different divisions. In 2004, he finished fourth in the Choo Choo Division and 15th in the Bama Division, and though he didn’t make the cut via the Lake Seminole regional (he finished 16th), he finished third at the Kentucky Lake regional to earn his third career top-10 finish and a trip to the All-American.

Going into today’s competition, the anglers knew they needed at least one 4-pounder to make the grade. Crow came close, weighing in a 3-pound, 14-ouncer to anchor his bag. On stage, he reported he’d been catching fish since his first casts of the day, and the bites never stopped.

“I’ve just been fishing current, using plastics,” he said. “They ran current all day, and they’ve done it every day I’ve been here. I don’t think where I’m fishing will run out of fish, because the ones I’m catching don’t live there.”

Crow’s transient current fish indeed seem to be a replenishing supply, as Crow said he caught seven fish over 3 pounds in one afternoon the first day he showed up for practice.

“Today was the worst day I’ve had as far as catching big fish,” he said. “I caught them the same way in practice. Those fish were probably spawning, so they’re gone now.”

Crow is not among the anglers locking through and making a lengthy run to the Smithland Pool. Instead, he’s finding his fish within 15 minutes of the launch ramp in Paducah.

Tomorrow, Crow will be paired with a cameraman, who will record his every cast for the “Wal-Mart FLW Outdoors” TV program on FSN. It’s Crow’s first time under the lights, but he’s keeping it all in perspective.

“It’s still just fishing,” he said of the opportunity to fish for $100,000. “If I were to win, I’d probably try to fish the FLW Tour next year and invest the rest.”

Count No. 2 boater Michael Bryson of LaFayette, Ga., is among the anglers who lost a fishing hole or two due to the mud churned up by last night’s downpour. Bryson said that if he had that honeyhole today, he would have caught more than he did – a more-than-respectable limit weighing 11 pounds, 7 ounces that has him only 4 ounces behind Crow.

“I’m making a 40-minute run to the Smithland Pool,” Bryson said. “It takes 45 minutes to an hour to lock through. I’m fishing shallow structure, using about five different baits.”

Bryson’s arsenal today included a crankbait, a spinnerbait, a buzzbait and a jig, all of which he worked over stumps and cover, finding a lot of fish hiding along the breaks.

Bryson was the No. 14-ranked angler in the Choo Choo Division in 2004 and finished fourth at the Kentucky Lake regional to claim his All-American slot.

Boaters hungry for the $100,000 top prize might be wise to look out for No. 3 Wayne Hudgens of Hot Springs, Ark., who claims he fished only two of his seven hot spots today. Those two holes earned him five bass weighing 11 pounds.

“I had a good practice,” he said. “I hit two of my seven spots, so if they bite tomorrow, I can do good. I’ve just got to concentrate and focus on what’s going on.”

Hudgens also stayed close to Paducah today and said that, for him, it was a slow bite even though he had a limit by 11:30 a.m.

“I culled twice, and I left my fish by 1:30 and went looking around,” he said. “It’s a slow bite. I’m not catching a lot of fish – just kind of like what I caught today.”

Hudgens was a rookie in 2004 when he ended the season ranked 10th in the Arkie Division. His fifth-place finish at the Toledo Bend regional afforded him his first All-American appearance.

“Last year was my first year to fish the BFL, and I made the All-American,” he said. “It’s a dream come true.”

Rick Byrnes of Tamaroa, Ill., was among the first to weigh in Thursday, and his 10-pound, 8-ounce limit held up, keeping him among the top five, in fourth place after day one. Behind him in fifth is Cadiz, Ky., angler Brian Hickey with a five-bass catch weighing 10 pounds, 1 ounce.

Rounding out the top 10 boaters at the All-American:

Altamont, Ill., co-angler Aaron McManaway caught a five-bass limit weighing 11 pounds to lead the Co-angler Division by more than 2 pounds. He caught his bass behind Cookeville, Tenn., boater Adam Wagner, who fared pretty well himself, landing in 12th on the boater side with 8-11.

“He was there for me, and I was there for him – it was a team,” McManaway said. “I’m as happy as can be. We had a great day – I was wanting really bad to do that today.”

McManaway is no stranger to All-American success – he’s last year’s co-angler runner-up. His back-to-back All-American dominance is all the more impressive considering the young angler has only fished the BFL since 2003.

McManaway earned his All-American berth by ranking 27th in the Illini Division points standings and finishing fifth in the Columbus Pool regional.

Two-time All-American qualifier Richard Hooter of Natchitoches, La., sits in the No. 2 spot on the co-angler side with a five-bass catch Thursday weighing 9 pounds, 3 ounces. “I’m going to win it,” Hooter said.

Jamie Floyd of Prarierville, La., is in third place in his first All-American with a catch of five bass weighing 8 pounds, 7 ounces, despite experiencing a bit of boat trouble on day one.

The full field of competitors will fish again tomorrow, and the co-angler champion will earn $50,000 at the conclusion of tomorrow’s weigh-in. The top 10 boaters, based on their two-day accumulated weights, will advance to Saturday’s competition, where they will compete for the top prize of $100,000 cash.

Friday’s takeoff begins at 7 a.m. from the Paducah City Ramp, located on the riverfront in downtown Paducah.