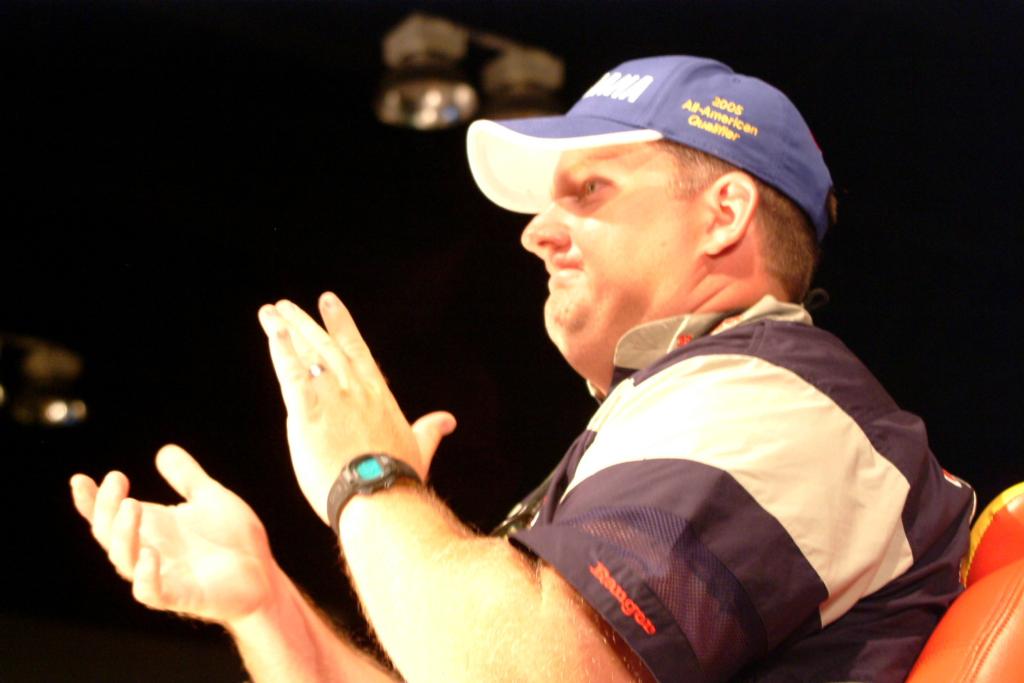 PADUCAH, Ky. – Wade Ramsey was in 12th place after Thursday’s first day of BFL All-American competition on the Ohio River. Though he was only two spots out of the top 10, he was 3 pounds behind the leader, and in a tournament where good bites seem to be few and far between, 3 pounds was a pretty substantial difference.

Now, with only one tournament day remaining, Ramsey not only finds himself in the top 10, fishing on day three, but he’s at the top of the leaderboard – with a whopping 3-pound, 7-ounce lead.

“I was fishing for a bigger bite,” Ramsey said. “It didn’t really work out for me yesterday, but it kind of did today.”

Ramsey pulled off his incredible feat to lead the All-American on a day when the bite remained sluggish. His five-bass limit today was one of only nine Boater Division limits and weighed 11 pounds, 10 ounces, just shy of 3 pounds more than his day-one weight. In fact, he’s one of only three top-10 boaters whose weights improved from day one to day two. But to hear him tell it, it wasn’t so easy.

“It was kind of a grind for me today,” Ramsey said. “I didn’t catch a lot of fish, but I caught five good, solid keepers. Today my goal was to go out and get good, quality bites.”

He said his day was pretty slow going, and he didn’t catch his last keeper until 2 p.m., not long before check-in time. He has been fishing near the dam up the Tennessee River.

“I’ve got about six or eight areas, but I’m primarily catching fish out of one spot,” he said. “That spot seems to replenish itself every day.”

Luckily for Ramsey, his weight will carry into tomorrow’s competition, with the $100,000 check awarded to the angler with the heaviest three-day weight.

Ramsey earned a trip to the All-American by ranking 11th in the Okie Division points standings and then finishing fourth at the Toledo Bend regional.

“It was slower today,” Crow said. “I had six bites – I caught three and I lost three. I feel like the best fish I had all day was one that I lost.”

Crow said he isn’t exactly sure why the bite continued to be slow today, but said it’s apparently tough everywhere.

“I’m tickled to be second and still have a chance,” he said. “If they bite (tomorrow) like they did today, though, it’ll be tough.”

Robert Beatty of Clermont, Fla., caught four bass today weighing 6-12, enough to move him up the leaderboard from seventh to third heading into the final day. His weight of 16 pounds, 6 ounces is almost 4 pounds behind Ramsey, though he’s hoping his long run will produce fruitful results.

“I fished a little creek about 55 miles from here,” he said. “I got in the creek about 8 o’clock and caught four keepers and lost the fifth. I lost three keeper fish.”

Beatty said he’s pitching and flipping stump rows in the Smithland Pool, and he’s undeterred by the pounds and ounces separating him from the leader.

Byrnes, Wagner round out top five

Rick Byrnes of Tamaroa, Ill., was fourth after day one and held onto that spot on day two with a 5-pound, 7-ounce catch that brought his two-day total to 15 pounds, 15 ounces.

Adam Wagner of Cookeville, Tenn., fished with the No. 1 and No. 2 co-anglers – Aaron McManaway and Steve Morgan, respectively – and earned himself a chance to fish for $100,000 with a two-day catch weighing 15 pounds, 7 ounces, good for fifth.

Rounding out the top 10 boaters at the All-American:

The original field of 42 boaters was pared down to the final 10 based on their two-day accumulated weights. These 10 will compete again tomorrow for the top award of $100,000 cash. They will take off Saturday morning at 7 a.m. from the Paducah City Ramp, located on the riverfront in downtown Paducah.