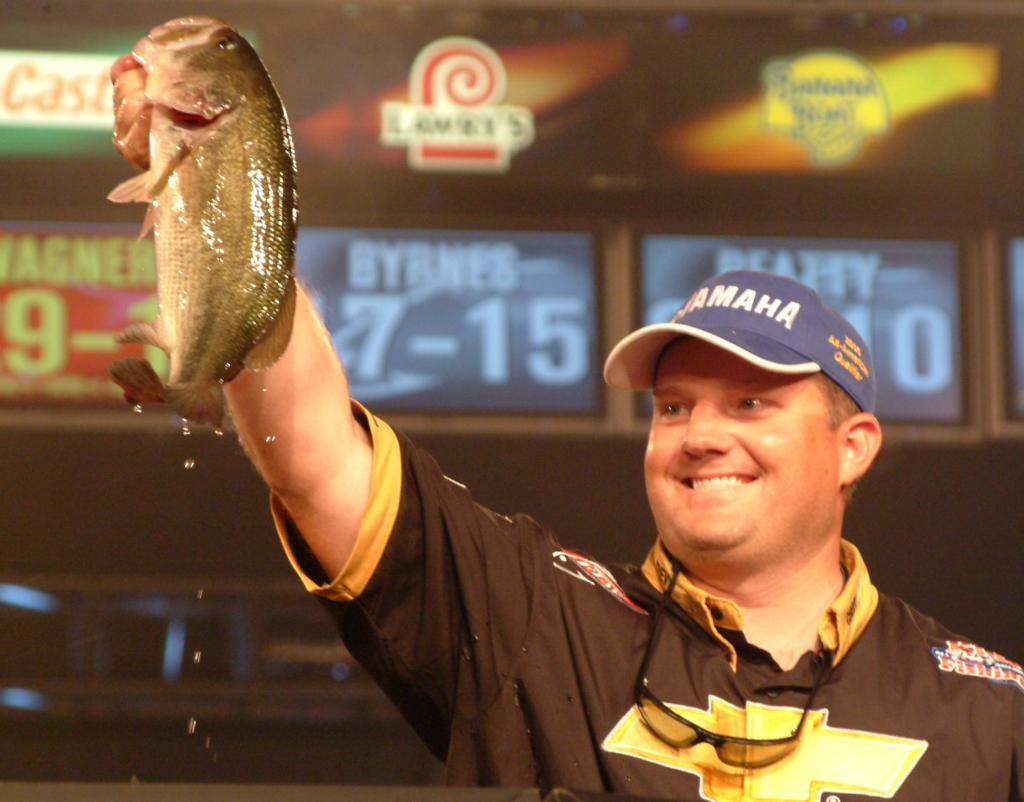 PADUCAH, Ky. – When Candace Ramsey got married just three weeks ago, she never dreamed her new husband could produce a wedding gift this big. Her groom, Wade Ramsey of Midwest City, Okla., walked away with $100,000 Saturday as winner of the 2005 BFL All-American – a pretty good paycheck when you’re a policeman by day.

On stage, Ramsey said he thought it would be close, but his performance was nothing short of dominating. His three-day, 33-pound, 3-ounce catch bested the runner-up by more than 4 pounds, and he did it all by hunting for the big bite.

In a tournament where nearly everybody else was fishing for smallmouths with finesse rigs, Ramsey bucked the system, going for largemouths with bigger tackle.

“I’m not a finesse fisherman,” he said. “I started looking for other options. These weren’t the best conditions to do what I’ve been doing. I went fishing for a bigger bite, and it’s been a struggle.”

Ramsey’s worst day, performance-wise, was on day one, when he landed in the No. 12 spot with a limit weighing 8 pounds, 11 ounces. He kicked it into high gear, though, on day two, leading the field by more than 3 pounds and improving his catch by almost that much.

Though several anglers – including runner-up Adam Wagner, who weighed in one of the tournament’s heaviest bass – had him nervous, the tournament was Ramsey’s all the way. As if the final weigh-in was not nerve-racking enough, Ramsey said he never finished out his limit until the end of the day, all three days.

“I decided to gamble with the largemouths,” he said. “Each day I had five keeper bites. It’s been stressful dealing with not having a limit until the end of the day every day.”

His final keeper today came at 1:15, when he had about 10 minutes of fishing time remaining in the day. He decided early this morning to gamble again and use a buzzbait, and again, his gamble paid off.

“I decided to throw a black Red River buzzbait,” he said. “The first place I went to, I caught a 3-pounder. Then I had a long dry spell. I started to get worried, so I went back to that first spot.”

That spot has proven to be plentiful and lucrative for Ramsey this week, to say the least. He says he caught 11 out of 15 keepers out of a rock ledge on the Tennessee River.

“It was a small pocket that had current flowing over it,” he said, adding that he caught most of his bass Carolina-rigging a green-pumpkin Zoom Baby Brush Hog. “I was throwing a rig over it – it was jagged and tough to fish. This spot was ideal for fish, though. They could stay out of current, but it had enough current to wash baitfish over it.”

Ramsey said he caught his heaviest fish during practice out of that very spot, including two back-to-back largemouths that prompted him to leave the area and not come back until the first day of competition. On day one, he said, another competitor beat him to the area, and after he left, Ramsey went in and caught three keepers. On the second day, Ramsey had the benefit of an earlier flight number and got to the hot spot first.

“This spot was ideal for fish,” he said. “I think a lot of people probably fish there, but I think I fished it differently than other people.”

Although Ramsey said he never caught fish as big as he did in practice during the tournament days, he said the spot replenished itself daily, offering plenty of largemouths for Ramsey to take to the scales.

“That helped me win this tournament,” he said. “I knew I had a shot. I practiced hard to come and do the best I could, but with the competition here, I wasn’t sure. Yesterday, I led it by 3 pounds, and that blew my mind.”

Ramsey said he and his new bride had hoped to build a house this coming winter, but thanks to his All-American winnings, they can start that sooner than they had planned.

Ramsey has competed in the Wal-Mart BFL Okie Division for three full seasons and ranked 11th in 2004 to advance to the Toledo Bend regional, where he finished fourth to earn a trip to the All-American.

Yesterday, Adam Wagner of Cookeville, Tenn., weighed in 6 pounds, 12 ounces and didn’t think his two-day total would even be enough for a top-10 finish. It turns out it was, and he turned up the heat on the final day, catching the day’s heaviest limit at 13 pounds, 10 ounces and hauling in one of the tournament’s heaviest bass. His three-day total weight of 29 pounds, 1 ounce earned him $25,000 as the second-place boater.

Green pumpkin was the order of the day for most anglers, including Wagner, who said he caught his bass with a 3 1/2-inch tube and a 5-inch finesse worm using a 3/16-ounce leadhead featuring a 4/0 hook.

“I was fishing rock piles around Barkley Dam, drifting with the current and letting the bait drift down over the rocks,” he said. “I had a 4-6 on Thursday, and I caught the biggest one today on the same rod.”

Wagner, the current Music City Division points leader, advanced to the All-American by ranking 21st in the 2004 Music City points standings and then finishing first at the Columbus Pool regional.

Houston, Texas, angler Mark Richards caught 24 pounds, 2 ounces over three days to take home $12,000 as the No. 3 boater. He entered the final day in the No. 6 position and advanced despite losing his game plan early in the day.

“My main pattern was fishing a spot with running water in the Tennessee River,” Richards said. “There were baitfish there, and there were big fish there. Whatever that water was, they shut it off today. It wasn’t running.”

Richards fished the area for about an hour before he gave up and began a hunt for new spots.

“I just ran a bunch of spots I’d never fished before, and I was happy to catch four today,” he said. “If they were running water, I’d be sorry I didn’t win it.”

Richards, a Northeasterner by birth, finished 20th in the Cowboy Division in 2004 and finished sixth at the Columbus Pool regional to claim an All-American slot.

Crow, Deal round out top five

Day-one leader Brent Crow of Hartselle, Ala., ended the tournament in fourth with a three-day total of 23 pounds, 7 ounces that earned him $9,000.

“It was a tough day again today,” he said. “The last two days have gotten slower and slower. I didn’t lose any today; I just didn’t get enough bites.”

Haubstadt, Ind., boater Ryan Deal landed in the fifth spot with a three-day total of 23 pounds, 7 ounces and took home $7,000.

Rounding out the top 10 All-American boaters: