Heating it up in Hartford 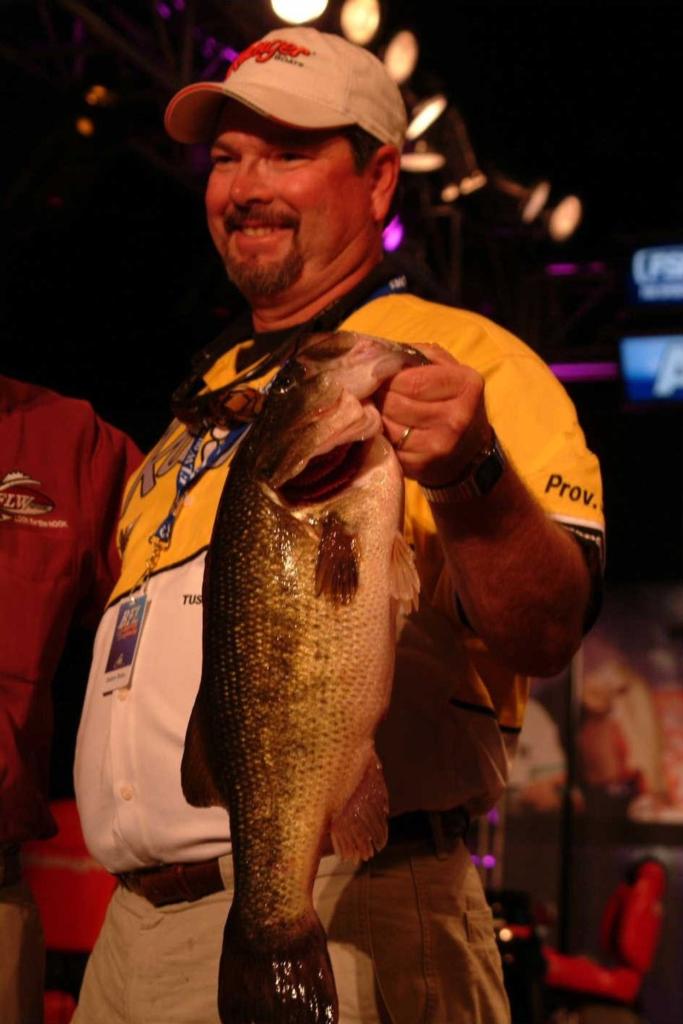 HARTFORD, Conn. – It was a tough day on the Connecticut River for opening day of the Wal-Mart Bass Fishing League All-American championship, but hey, no one ever said fishing was supposed to be easy. All told, 47 of the 48 boaters caught fish, with 24 of them catching limits. That’s a pretty good ratio, but making it tough was the nearly 15 pounds needed to take the lead, and most of those 24 limits were in the 6- to 9-pound range.

At the top of the heap is Alabama boater Dalton Bobo with a limit that weighed 14 pounds, 15 ounces. Obviously the Northern climate suits the Southern angler quite well. Bobo was the No. 5-ranked angler in the Dixie Division in 2005, and he advanced to the All-American by finishing third at the Clarks Hill regional.

Anchoring Bobo’s day-one haul was a 5-pound, 11-ounce kicker that earned him $500 as the day’s big-bass winner. The real story here is not so much that Bobo is in the lead but rather how he got there. On a day that stumped some of the best and brightest BFL anglers, Bobo led the pack despite the fact that his practice honeyhole had literally dried up, forcing him to just go fishing.

“I had a really good spot I found in practice, and the water on it was 8 feet high,” he said. “I can’t get in there now.”

Indeed, befuddling anglers today were the falling water levels of the Connecticut River. Bobo’s particular spot went from 8 feet of water to 6 inches of sand.

“There was no water there – just dirt,” Bobo said. “I went junk-fishing, hitting stuff on the river that looked good.”

Bobo’s bait of choice was a buzzbait, and it certainly brought in the bass. He currently has a lead of 3 pounds, 7 ounces in a tournament that hands a $140,000 check to whomever has the heaviest three-day accumulated weight.

“This happens to people; it’s happened to me,” Bobo said of having a sweet spot eliminated come competition time. “I just considered the first day of competition a practice day and wound up putting a pattern together. You want to do that when it counts.”

Bobo has been fishing BFL events for more than 10 years and is making his first All-American appearance since 1996. He’s also tackling the prestigious Wal-Mart FLW Series this year, though he’s currently in 171st in the points standings on that circuit. Regardless, Bobo has spent enough time on the water as a competitor to know just how significant his day-one clutch performance was.

“I’ve realized over the years you can’t stub your toe against this kind of competition,” he said. “I’m pretty sure the river will continue to fall. I understand the tide, and tomorrow I’ll try to run it the same.”

Carmell more than 3 pounds behind in second

Behind Bobo in the No. 2 spot is Virginia Beach, Va., boater Christopher Carmell, with a five-bass limit that weighed 11 pounds, 8 ounces. Carmell was ninth in the Northeast Division in 2005 to earn a trip to the Kerr Lake regional, where he finished second to advance to this week’s event.

Carmell estimates he caught eight or nine keepers today, the heaviest being a 3-pound, 6-ouncer that anchored his catch. He might have been on top today himself but says he lost a few, noting also that he fished the main river and the backwater pockets today to bring in the bass.

“The fish weren’t on a couple of my spots, but that’s how they do here – they’re here one day and gone the next,” Carmell said. “My main-river fish were there, and I had probably 20 bites today.”

The key for Carmell today was his loyalty to a buzzbait that, like Bobo, treated him awfully well. He says all his day-one fish were largemouths.

“I had a bait that I stuck with all day long,” he said. “I knew the fish were there. I think I can catch another five tomorrow. I’m going to try to win it.”

Walser in third, says he should have had 15 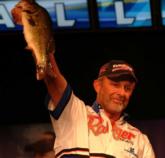 Finishing day one in the third spot is Lexington, N.C., angler Robert Walser with a limit of bass weighing 11 pounds, 4 ounces. While he is certainly in an enviable position in third, he says his limit could have exceeded 15 pounds today were it not for a few lost fish.

“I missed several fish that didn’t get my bait,” he said. “I didn’t hook them, so I can catch them tomorrow. If the ones I saw tried to bite today, I’d be leading.”

Walser estimates he caught 12 to 15 keepers today, and he too caught them both on the main river and in the backwater pockets. His biggest bass came in at 4 pounds, 6 ounces.

“I’ve got three places I really feel like I can catch them on, and I still have one I haven’t even been to,” said Walser, competing in his fifth All-American. “I’m tired of being middle of the pack. It’s time.”

Walser advanced to the All-American by ranking third in North Carolina Division points standings and finishing fifth at the Clarks Hill regional.

Lawyer, Carter round out top five

“We set out today to try to catch smallmouths, and that’s what we caught,” Lawyer said. “I hope it holds up.”

Behind him in fifth with a limit of bass weighing 10 pounds, 12 ounces is Kip Carter of Oxford, Ga. He came from the Bulldog Division to compete in the All-American, his first.

“I’m covering a lot of water,” he said. “I probably covered three miles today. Good bites are hard to come by.”

Rounding out the top 10 boaters after day one at the All-American:

Leading the 48-man co-angler field is Michael Wright of Covington, Ga., with a five-bass catch weighing 8 pounds, 15 ounces. He hauled in one of only three co-angler limits today and leads his nearest competition by a mere 4 ounces heading into tomorrow, which is the co-anglers’ final day.

Wright is fishing this week courtesy of his third-place performance at the Lake Toho regional, which he qualified for via the Bulldog Division. His heaviest bass of the day clocked in at 2 pounds, 3 ounces, but according to Wright, he was lucky to have a limit, as he rounded that out in the final 45 minutes of competition.

Behind Wright in second place is Carl Whipple of Fredericksburg, Va. Whipple brought in a four-bass catch today that weighed 8 pounds, 11 ounces.

“I didn’t fish as clean as I wanted to,” Whipple said. “Tomorrow I’ll keep the bait in the water and fish clean.”

Whipple is a Shenandoah Division angler who finished sixth at the Clarks Hill regional to earn a trip to the All-American.

In third with a limit weighing 8 pounds, 5 ounces is Anthony Ferdinando of Spicewood, Texas.

“It started out really slow,” he said. “I didn’t catch my five until after lunch, and then it came really quick.”

Ferdinando advanced to this week’s competition via the Cowboy Division and Lake Ouachita regional.

Lay, Smith round out top five

In fourth place with a five-bass catch weighing 8 pounds, 2 ounces is Cleveland, Tenn., co-angler Pat Lay. He was the No. 4-ranked Choo Choo Division co-angler in 2005 and finished third at the Clarks Hill regional.

Behind Lay in the fifth spot is Keith Smith of Madison, Miss. He caught four bass today weighing 7 pounds, 13 ounces to sit just a little over a pound behind the leader. He ranked fifth in Mississippi Division points standings to advance to the Lake Martin regional, where he finished sixth to advance to the All-American.

Rounding out the top 10 co-anglers after day one at the All-American:

Competition continues tomorrow with a 7 a.m. takeoff from Charter Oak Landing in downtown Hartford. Tomorrow’s weigh-in begins at 4 p.m. at the Connecticut Convention Center, following which the co-angler champion will be crowned. The winning co-angler will earn up to $70,000. Following tomorrow’s weigh-in, the boater field will be cut to the top 10 that will continue competition Saturday, when the winner will earn $140,000 cash.