A good win for Goodwin 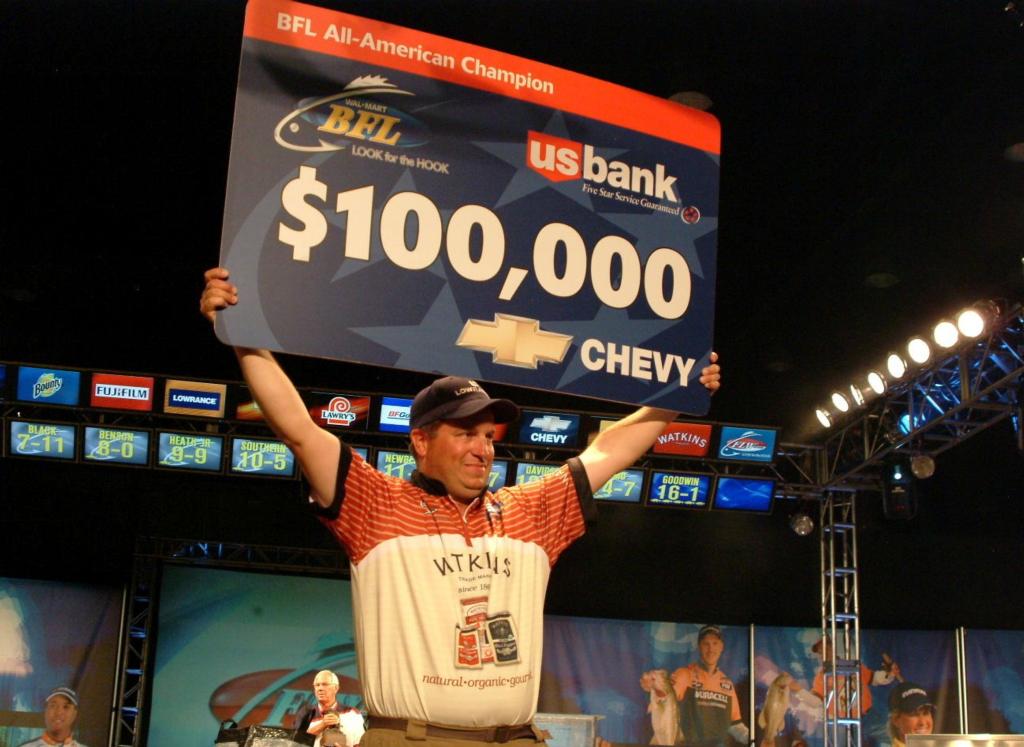 LOUISVILLE, Ky. – The $1 million Wal-Mart Bass Fishing League All-American championship saw three different leaders in three days of competition, but it was who ended up on top today that mattered most. The last man standing on the Ohio River was yesterday’s No. 3 Shonn Goodwin, who weighed in five of the 12 bass caught today on the boater side to take the All-American crown and $100,000 cash.

The marketing manager from Moore, Okla., emerged victorious after one of the most grueling tournaments in recent memory. He caught 3 pounds, 15 ounces on the first day to end up in 12th but climbed to third yesterday with 7 pounds, 2 ounces. His day-three limit weighing 5 pounds sealed the deal, as his combined total of 16 pounds, 1 ounce was enough to beat runner-up Curtis Samo by 1 pound, 10 ounces.

Sweetening the pot is the fact that as the All-American champion, Goodwin will compete in the prestigious $2 million Forrest Wood Cup as a pro, where he will be angling for a top prize of as much as $1 million cash. That event will take place in August on Arkansas’ Lake Ouachita, not too far from Goodwin’s Okie homeplace.

There to cheer him on today were his wife, Cindy, and their 6-month-old “miracle baby,” Sophie. According to Cindy, the first thing the big paycheck will go to is a college fund for the little one.

To earn that college money, Goodwin had to overcome a 1-pound, 11-ounce deficit as the No. 3 boater heading into today, and he did it the hard way – by running nearly 250 miles south to the Rocky Point-Deer Creek area.

“I made a commitment to run a long ways,” Goodwin said. “It was hard work, almost 250 miles a day in that bass boat. It’s really nerve-racking, because if you make one bad decision, you’re out of luck.”

The long run left Goodwin only about two and a half hours per day to try to catch fish.

“I couldn’t second-guess myself,” he said. “I didn’t have time to make adjustments. I lost a couple of fish, but it didn’t matter. I executed well and got enough bites to scratch out a win.”

Goodwin’s bait of choice this week was a square-billed crankbait he called the RC.5. The presentation was an odd choice in a week when most fishermen were opting for a slower approach. The difference, he says, was key.

“I was cranking it really fast across the stumps,” he said. “That creates a reaction bite. Almost everybody was flipping slow, but the crankbait moves so fast that the fish don’t have time to reflect; they just react. That’s contrary to what a lot of people were doing.”

The alternative presentation also made Goodwin’s long run worth it. While many competitors this week opted for a long run, his company in the top three were staying close. In the end, the long run won out.

“I felt like I was around the fish to win,” Goodwin said. “It took me two and a half hours to get there through the lock. I was either going to catch them or not – there was not much I could do about it. I caught a limit and I thought about winning, but they were so small, I wasn’t very confident.”

He knew that if day-two leader Calvin Davidson had any fish at all, even with a limit, he might not have enough to win. But when Davidson came up empty-handed, it became Goodwin’s time to shine. Next up – Arkansas in August.

“I’ve been to Ouachita,” he said. “I like to fish there, but I’ve only fished it a couple of times. I’m excited to take a look.”

Goodwin is an Okie Division veteran who was ranked fourth in 2006 to advance to regional competition at Wright Patman, where he finished fifth to earn a trip to the All-American. His resume includes 11 top-10 finishes and three victories, including today’s.

Samo remains a bridesmaid in second

Perennial All-American contender Curtis Samo of Rochelle, Ill., came close yet again today but ultimately had to settle for second with a three-day catch of 14 pounds, 7 ounces, worth $25,000. Samo’s All-American stats now include a second-, third- and fourth-place finish – and seventh and ninth place – but still no wins.

“I guess it wasn’t meant to be,” he said onstage. “I honestly thought this would be my tournament to win.”

It was a tough tournament for anybody to win, as the Ohio River was a formidable foe all week. Samo ended day one in seventh with 5 pounds, 4 ounces and caught 6 pounds yesterday to rise to second. He caught two bass today – double the number of what a lot of finalists caught – that weighed 3 pounds, 3 ounces that ultimately put him 1 pound, 10 ounces shy of the leader.

“You want to put yourself in a position to win, and I did that, but I had five keeper bites, and I lost three of them,” he said. “You can’t do that in a tournament this tough.”

Samo was working several different baits this week, and he was fishing close by, affording him the opportunity to fish multiple spots. He started off this morning fishing riprap in a spot where he had caught a keeper each of the first two days.

“I started throwing a crankbait, and the line got wrapped around a rock,” he said. “There was a fish on the end of it, and it pulled right off. That fish probably would have won it for me.”

He then relocated to another spot where he had previously caught some smaller fish and landed a good-sized bass on a swimming jig, only to have his heart broken by the crankbait again.

“I started throwing it and I got another one, and it pulled off,” he said. “I bopped around different places, and it was a long time between bites.”

One last trick in his bag was a Boy Howdy topwater that had handed him good fortune earlier in the week, and that lure was ultimately the straw that broke the camel’s back.

“I had a 2-pounder jump over my bait,” he said. “With about an hour left, (co-angler partner) Mike Williams caught two fish, so I think we figured something out, but it was probably too late.”

While coming so close yet again to an All-American victory is understandably difficult, Samo, ever the professional, took it all in stride.

Yesterday’s leader Calvin Davidson of Plainfield, Ind., had a day much like yesterday, when he caught 7 pounds, 3 ounces to take over the lead with 12-12 over two days. There was just one fundamental difference.

“It was a lot like every other day; I just didn’t get the bites,” Davidson said. “I felt like I fished pretty well. I felt confident I could be in the top 10, but I never dreamed I’d be leading it. This morning, I had more wires coming out of me than a 911 call center, and it was unnerving.”

Indeed, Fox Sports Net was on hand with all the tricks of the trade, including hat cams and all manner of mikes and gadgets. It’s enough to make any weekend angler a little nervous when it’s their first time in the spotlight. But Davidson gamely continued on, pitching a 3/16-ounce Prowler tube with a Bite Me jighead to try to land some bass.

“I was swimming it through balls of fry,” he said. “The other fish get aggravated and come up and eat. I caught five of my eight fish on that tube.”

Like Samo, Davidson played it close all week, fishing within about five miles of the launch ramp, he estimates, in Harrod’s Creek.

Davidson was the 29th-ranked angler in 2006 Hoosier Division standings, which enabled him to compete in the Kentucky Lake Regional, where he finished fifth. That finish sent him to this week’s All-American, his first.

His three-day catch of 12 pounds, 12 ounces earned him $14,000 plus $18,000 in Ranger and Evinrude contingency bonuses. He was also the highest-finishing participant in the Ranger Cup contingency program, earning him a brand-new 519VX Ranger boat.

Taking fourth place and $13,000 is Ronald Yurko of East Point, Fla., with 11 pounds, 7 ounces over three days. He also earned another $16,000 in Ranger and Evinrude contingency bonuses.

“The beds were all empty, and the fish were all gone,” Yurko said. “I gave it my all, and that’s all I could do.”

Ultimately finishing fifth was day-one leader Dicky Newberry of Houston with 11 pounds over three days. He earned $12,000 plus $14,000 in Ranger and Yamaha contingency bonuses.

“We did all we could do,” said Newberry, who also dealt with a back rendered sore from casting. “We fished hard today. That’s the way it goes.”

Rounding out the top 10 boaters on the Ohio River: