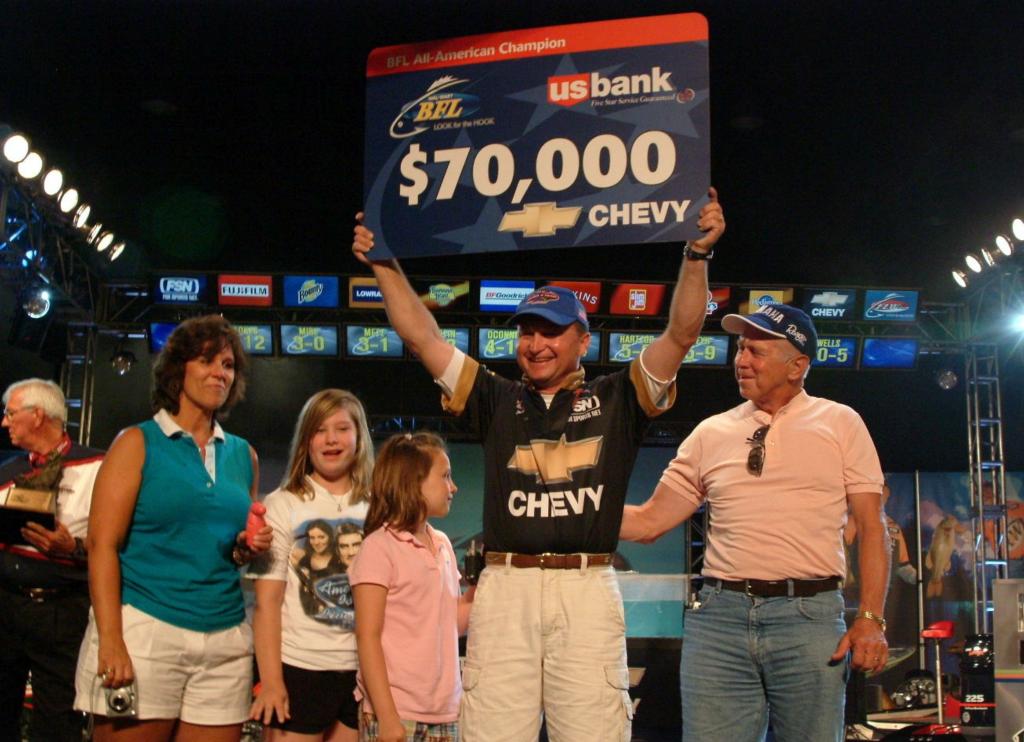 LOUISVILLE, Ky. – In the end, it was destiny. Kevin Wells of South Shore, Ky., emerged as the newest Wal-Mart Bass Fishing League All-American co-angler champion and walked away $70,000 richer from a tournament he qualified for just six weeks ago today.

Wells was the fifth-place finisher at the recent TBF National Championship and the top Northern Division contender fishing that event as a co-angler. As such, he earned a ticket to this week’s All-American on the Ohio River, a tournament he was particularly excited about given the fact that he considers the Ohio River his regular playing ground, although a few miles away from the Louisville area, where this week’s tournament took place.

Interestingly, he earned the title despite not catching a single bass on what had to have been the toughest day of what was an extremely challenging tournament for competitors. In fact, only three out of 10 co-anglers caught a bass at all today, but none were enough to match Wells, who entered day three with a 4-pound, 8-ounce lead.

The 10 pounds, 5 ounces of bass he caught over the first two days were enough to sustain him – indeed, enough to allow him to win with a 2-pound, 5-ounce margin of victory. While he’ll take the victory no matter which way it came, Wells did indeed have a tough go of it today on the stingy Ohio.

“It kind of fell apart today,” he said. “I caught one 8-inch bass and had another 6-incher on. It’s the Ohio River.”

His lead, which was big enough to be well above the overall weights of half the co-angler top-10 after day two, did provide him a certain measure of confidence as he went out on the water today in boat No. 1 with day-two boater leader Calvin Davidson, who ultimately ended up third in his division.

“On the Ohio River, especially on the co-angler side, that’s a large margin,” Wells said. “I knew if I could catch one fish, that would give me a 6-pound lead, so somebody would have to catch a huge stringer to beat me.”

Then Wells didn’t get any keepers, forcing him to come to weigh-in not knowing if his lead would hold or not.

“I didn’t get any bites the first three hours,” he said. “I caught short fish, and then it got really hot and sunny, and it went downhill from there.”

Wells and Davidson wound up with one keeper bite between them all day, though neither ultimately weighed in a fish. Wells blamed their hard luck on fishing pressure.

“It’s typical river fishing,” he said. “There were so many boats that a lot of the fish got taken, plus a lot of them are moving out into their summer pattern. I think we stayed too long.” 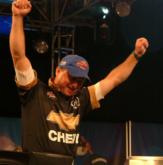 Wells said he caught his bass this week on 4-inch Berkley Power Worms as well as buzzbaits, and he got one bass on a spinnerbait. Wells, a laborer by trade who recently won $1,000 at the TBF championship, was enjoying letting the reality of a $70,000 payday set in. He earned $50,000 for the victory plus $20,000 in Ranger and Yamaha contingency bonuses.

“The money is great, and I love fishing for two years’ salary in three days!” he said. “That’s a lot of money. If you had told me that three months ago, I’d have said you were crazy. I’m just an everyday working guy, so it’s possible for anybody. My dream is to fish or work in the industry. I love to promote the Federation, and I love to promote family values.”

Spoken like a true champion. Wells will soon have another chance to make a name for himself, as his win today earned him entry into the prestigious $2 million Forrest Wood Cup, bass fishing’s premier championship event. That tournament will take place this August on Lake Ouachita in Arkansas.

Williams hangs on to second

Yesterday’s No. 2 co-angler remained today’s No. 2 co-angler, though Mike Williams of Lancaster, Ky., did catch two of the five co-angler bass brought in today. His day-three catch of 2 pounds, 3 ounces brought his three-day total to 8 pounds, earning him $15,000 plus $6,500 in Ranger and Yamaha contingency bonuses for his runner-up finish.

This is Williams’ second consecutive All-American appearance, as he finished 21st last year on the Connecticut River. When he qualified again, he set a goal for himself to make the top 10. Mission accomplished.

“I’ve been blessed in this event and in my whole life,” said the humble Williams, who was ranked sixth in 2006 Music City Division points standings. He went on to finish fourth at the Lake Chickamauga Regional to advance to this week’s All-American.

Williams said he fished Cumberland Pro baits all week and credited those lures with handing him a top-10 finish.

“Today was really slow for me,” he said. “I caught my two fish with one hour left to go. It was the same thing yesterday. This was an unusual tournament in that I’m usually nervous. I’ve been calm all the way.”

After enduring boat rides as long as 220 miles on days one and two, Williams enjoyed the closer fishing with No. 2 boater Curtis Samo today. However, whether he had all day or just a couple of hours to fish did not seem to matter much.

“I was fishing with Bill Gretten on day two, and we made a 220-mile run, and we only got to fish two hours,” he said. “With 15 minutes left to go, I caught what I ended up weighing in, and I caught them on a jig. The first day I got to fish with David Wright, and we were only fishing two hours too. We probably ran 150 to 160 miles. When you’re only getting to fish that short of time, every second counts.”

Today, he estimates that he and Samo didn’t travel more than 30 miles total, though he knew that with a lead the size of Wells’, his chances of winning were rather slim, even with a full fishing day.

“I was really just trying to hold on to second place,” Williams said. “It’s amazing how fishing can turn out. It means so much to come here. For a weekend guy, this is awesome.”

Tight top five on co-angler side

Chad Hartzog of Bush, La., led day one but came up empty on day two. He did land one bass today – one of the five bass weighed in on the co-angler side – that bumped his three-day total to 5 pounds, 9 ounces, good for third. He earned $7,000 plus another $2,500 from Yamaha as a contingency bonus.

Taking fourth place with 5-9 as well is William Feyh of Brandon, Miss. Feyh, too, had some luck today, bringing in two bass that weighed 2 pounds, 2 ounces that helped earn him $6,000 plus $4,500 in Ranger and Yamaha contingency bonuses.

Rounding out the top 10 co-anglers on the Ohio River: