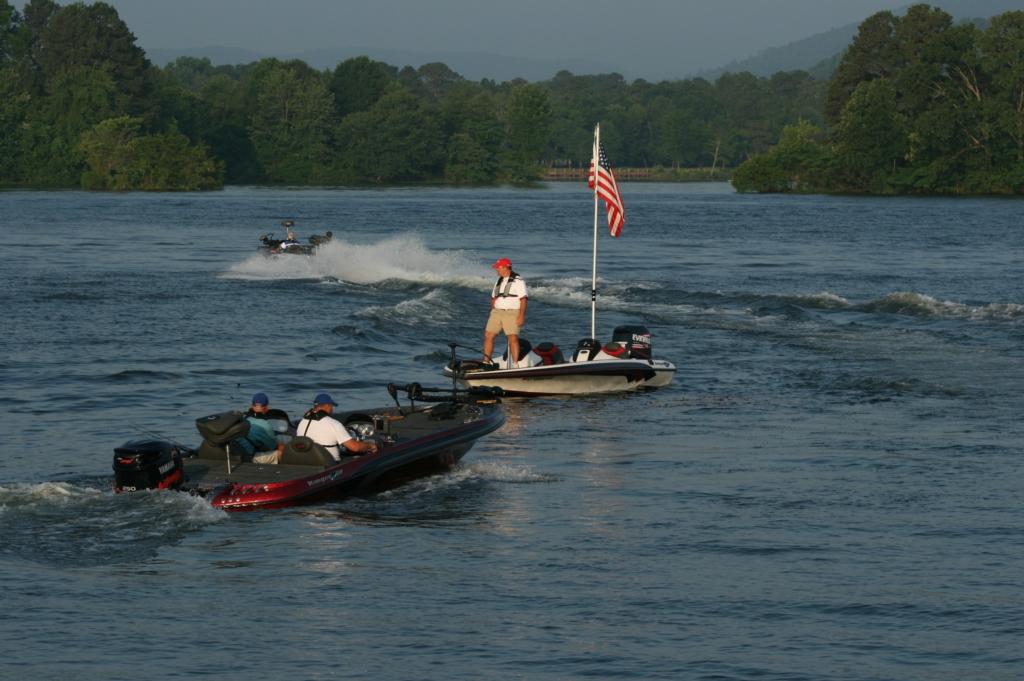 HOT SPRINGS, Ark. – The weatherman was a little premature in yesterday’s “sunny” forecast, but as day broke for round two of the 25th annual Wal-Mart Bass Fishing League All-American presented by Chevy, there was no doubt that anglers would enjoy those warm, clear conditions.

On day one, overcast skies persisted until early afternoon. The upside is that the dim lighting presented 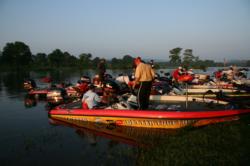 Celebrating his 53 birthday today, Carver finds himself in a reminiscent position. Ten year ago, he won the BFL All-American in La Crosse, Wis. three days before his birthday. Carver admitted he’d like to secure another such birthday gift, but noted that he still has plenty of work ahead of him.

“Just because I’m in the lead and I had a great day doesn’t guaranty that I’ll make the top-10,” he said. “(Today) could be totally different and I might not catch `em.”

Picking through scads of small bass in hopes of boating a chunky kicker will be the task facing the field of 54 boaters and co-anglers. Bites have come from a diverse mix of structure including docks, brush, points and humps. Looking at the rods strapped to boat decks prior to launch, it was clear that anglers intended to try several tactics. Crankbaits, spinnerbaits, jigs, shaky heads, and Carolina rigs will be common selections on day two. 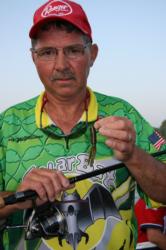 One angler planning a consistent approach is third-place boater Terry McWilliams of Greenfield, Ind., who will stick with his tried and true “Stupid Tube.” Ideal for clear water, the rig employs a 1/8- or 3/16-ounce jig with the head positioned inside a green pumpkin tube.

“That’s what got me here – I’ve qualified for six Indiana state teams, four national championships, a Bassmasters Classic and the BFL All-American,” McWilliams said. “Ninety-nine percent of my bass have come on that Stupid Tube.

“It’s a very versatile bait, as long as you fish it slow. It skips well under docks and it imitates a crawdad. That’s the favorite bait of bass from Minnesota to Georgia, so (the Stupid Tube) works all over.” 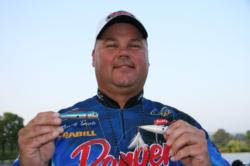 a surface popper with a second popper trailing on a 3-foot leader attached to the lead bait. Rigging the heaviest lure in the trailing position optimizes castability, while varying colors promotes diversity.

“When you find fish schooling, they just go nuts over this. It’s absolutely a dynamite rig.” 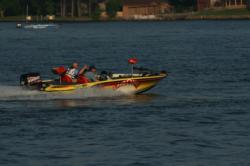 Predictably, Lake Hamilton has yet to give up any large bags. (Carver’s was the only double-digit catch on day one.) A few quality fish were caught, including Shayne Berlo’s 4-1, which took Big Bass honors on the boater side and co-angler Billy Cain’s 5-2 – best in his division.

The upside is that with low overall weights, a strong day-two performance could bring the top-10 cut within reach for many competitors. Tenth place on day one was 7 pounds, 2 ounces, but 20th place was just a pound less at 6-2. 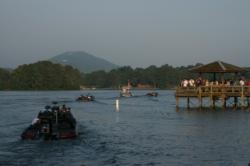 also advance to the $2 million Forrest Wood Cup in Columbia, S.C., Aug. 14-17, where the boater will compete with top anglers from the Wal-Mart FLW Tour, Wal-Mart FLW Series, Stren Series and The Bass Federation for as much as $1 million – the sport’s biggest award.

The entire field competes Thursday and Friday for an accumulated two-day weight. The top-10 boaters and co-anglers advance to Saturday, and the winners are determined by the heaviest three-day weight.