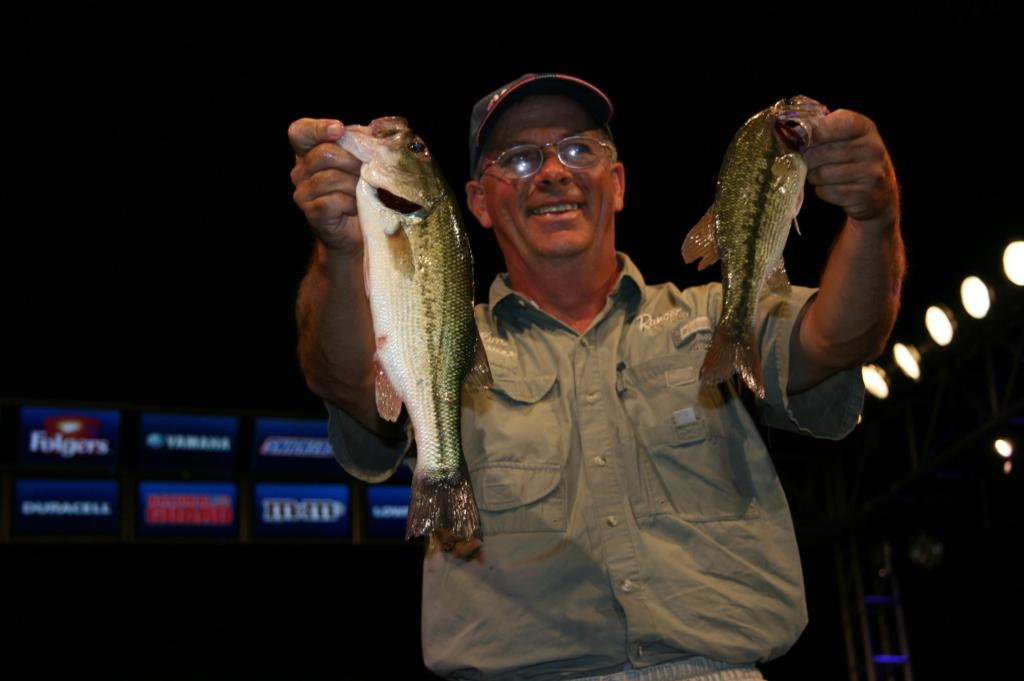 Despite bagging less than half his day-one weight, boater Kim Carver celebrated his 53rd birthday by holding on to the top spot. Photo by David A. Brown. Angler: Kim Carver.
May 30, 2008 • David A. Brown • Phoenix Bass Fishing League

HOT SPRINGS, Ark. – Normally, it’s tough to maintain a lead when you catch less than half of your previous day’s weight. For Kim Carver, still leading the Wal-Mart BFL All-American presented by Chevy, a strong opening-round effort plus mostly meager performances across the board on day two enabled him to do just that.

Hailing from Milledgeville, Ga., Carver led the Boater Division on day one with a limit weighing 11 pounds, 6 ounces. Like many competitors, he struggled on day two, but managed to bag a limit weighing 5-7.

In stark contrast to the light breezes and mostly overcast conditions of day one, anglers faced sunny 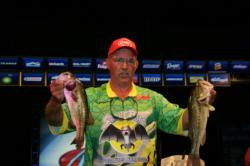 skies and winds of up to 15 mph on day two. Not surprisingly, a lot of fish displaced and a lot of productive patterns turned into glorified casting practice. No doubt, a superstingy Lake Hamilton hurt a lot of feelings today, but everyone played on the same wet field. Some just found their way to the right fish, while others faltered.

Carver caught most of his day-one fish in shallow water on a shad-colored Zara Spook. The different complexion of day two required adaptation. “The (changing conditions) slowed the topwater bite down, and I had to go to other measures.”

One of his limit fish came on a topwater, another hit a crankbait while three fell for a 4-inch worm fished on a 1/32-ounce jighead in 70 feet of water. Carver said the free-fall finesse presentation is highly effective on picky bass during a tough bite. 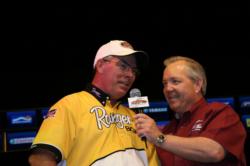 All things being relative, Carver said he knows that victory’s fruit hangs within reach of several competitors. Three pounds, 6 ounces separates the first- and 10th-place spots, so fortunes could turn with good bites converted into catches or fish lost at boatside.

“Any of us (in the top 10) are in a position to win,” Carver noted. “One good fish by any of us could clinch the whole tournament. Could that be me? Who knows? But do I feel like I can go out and catch a good stringer tomorrow? Yes, I do.”

Carver said he would feel confident with 8 pounds on day three. He said he’ll start the final round by trying to re-create a promising scenario he saw on day two: “I started off on top today. I caught one of my keepers on top, and there were three other keepers with it. I had another keeper follow (the topwater bait) later in the day. 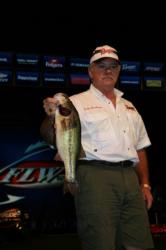 going to try to get a couple good bites early.”

Much ado has been made over A) Carver’s potential to win his second BFL All-American title and B) again doing so during his birthday week. Carver won his first All-American title on May 27, 1998, in La Crosse, Wis. That win came three days before his 43rd birthday. Carver celebrated his 53rd birthday today, so do the math.

Now, ask Carver about any extra motivation, and he’ll tell you he doesn’t need it: “If I didn’t feel like I could win, I wouldn’t be here. Just because it’s my birthday doesn’t mean anything.” 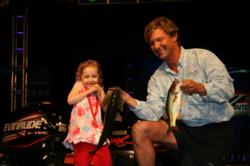 After taking fifth on day one with an 8-pound, 10-ounce bag that included the Boater Division’s big bass, Vienna, Va., angler Shayne Berlo posted 7-7 on day two. His 16-1 total, just 12 ounces out of the lead, moved him into second place for the final round.

Berlo said a late-day rally kept him in the hunt: “With an hour and a half to go, I had one fish. I just went crazy, fishing as fast as I could. I put the trolling motor on high speed and hit some of my key docks. They just started biting the last hour.”

Stating that he had to burn through a lot of his spots on day two, Berlo said he would fish all new water during the final round. “It’s going to be tough, especially with all the weekend boat traffic.”

Rounding out the top 10 boaters at the BFL All-American event:

Improving on his third-place effort on day one, Blake Wilson of Prattsville, Ark., caught a limit weighing 5 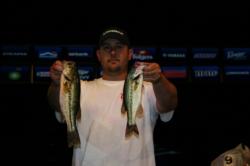 pounds, 8 ounces to lead the Co-angler Division with a 13-11 total. Fishing around docks and steep rock banks, he caught most of his fish on Texas-rigged worms.

Michael Roy of Ivy, Va., made a huge leap from 29th to second by totaling 11-14. His day-two weight of 9-pounds, 2-ounces was the heaviest stringer of the entire weigh-in. In third place, Allan Williams of Moncks Corner, S.C., caught a limit weighing 8 pounds, 2 ounces and improved 20 spots with 11-12. He anchored his total with the day’s biggest bass, a 4-pound, 5-ounce largemouth. 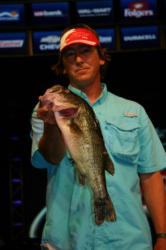 Rounding out the top 10 co-angler leaders at the BFL All-American event: