Many anglers struggle on first day of All-American 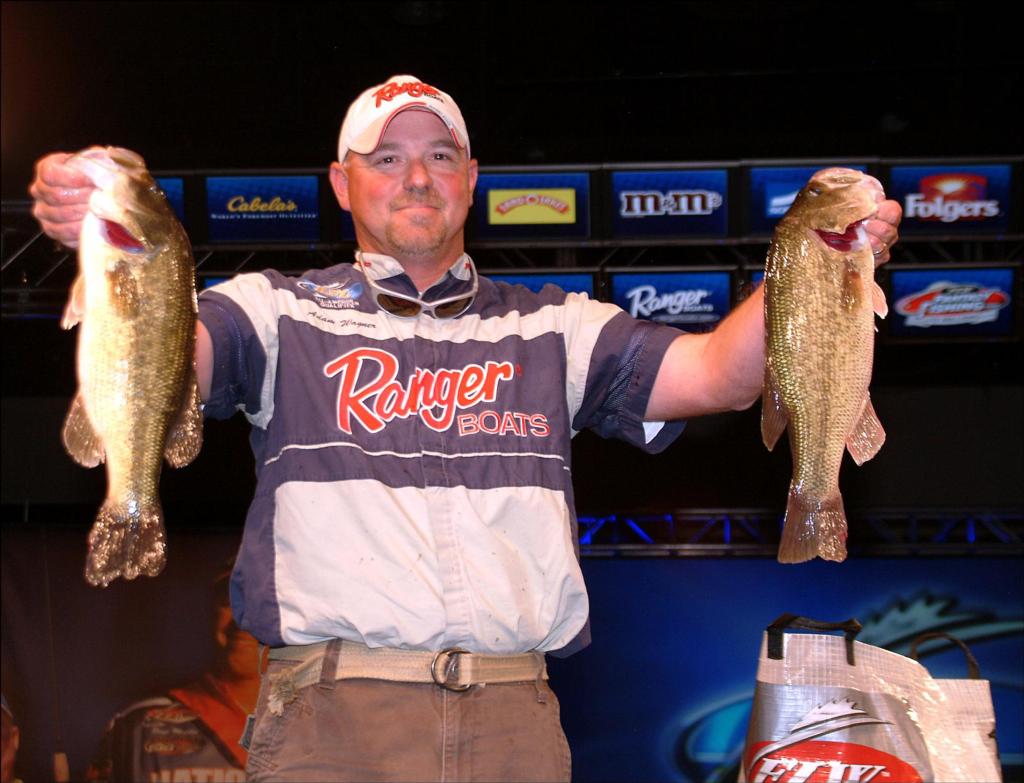 DAVENPORT, Iowa – Thursday was a tough day of fishing for a majority of the field on the opening day of the Walmart BFL All-American. Only about 10 percent of the 104 boaters and co-anglers fishing the Mississippi River weighed five-bass limits, and many reported catching fish that were short of the 14-inch minimum. But walking tall by weigh-in’s end was boater Adam Wagner, whose hefty limit weighed 15 pounds, 9 ounces and put him in first place.

The Cookeville, Tenn., pro is a three-time All-American qualifier with 19 top-10 finishes in the Bass Fishing League including five wins. And he’s on fire this year, already having won two events in the Music City Division (Old Hickory and Center Hill lakes). Now he’s leading the world’s biggest championship for weekend bass anglers by nearly 2 pounds.

Pools 13 to 17 of the Mississippi River near the Quad Cities are open to BFL competitors this week, and Wagner is one of several who locked through three times to make the long journey upstream to 13.

“I went all the way … had about two hours of fishing time,” he said. “I caught three keepers in 14 and three keepers in 13 … so I have to decide what I’m going to do tomorrow. It’s a big gamble, but that’s where the bigger bites are coming from.”

In pool 13, Wagner said he’s swimming a ¼-ounce jig with a black skirt “in the grass and the lily pads” in about a foot of water. In pool 14, he’s flipping a Sweet Beaver with a 3/8-ounce tungsten weight to “wood and lay-downs in the current in the main channel.” He said he’s flipping to about 3 feet of water.

If the sun shines and the weather warms tomorrow as predicted, Wagner said his chances might look brighter on pool 14, especially when gaining an advantage on fishing time, but it will all depend on how the fish cooperate. 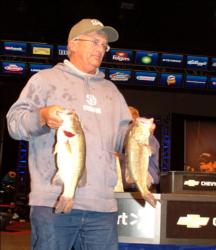 If he does reign over the qualifiers after Saturday’s final weigh-in, he’ll win $120,000 and a berth into the $2 million Forrest Wood Cup.

Edward Gettys of Scottsboro, Ala., is second in the Boater Division with five bass weighing 13 pounds, 10 ounces. Gettys is also a three-time All-American qualifier, and he has 23 top-10 finishes in FLW Outdoors events including seven wins, two of which came in the Stren Series and two in BFL Regional events.

Like Wagner, Gettys was able to get in a few practice days in mid-May before the off-limits period, but he said many of his best spots had dried up by the time the tournament started: “They were all dry land. So I went to the deepest backwater that I could get to in pool 17.

“I knew pool 13 was the place to win, but the time factor … was too risky. It turned out to be a pretty good move.”

Gettys said his downstream area has other boats fishing there, but he’ll return Friday to see if he can bag another limit.

“That’s the only chance I have,” he said. “I’m just fishing wood and banks. Today I threw spinnerbaits and ChatterBaits, faster stuff like that. If they don’t bite tomorrow, I’m going to slow down and be pitching or flipping.” 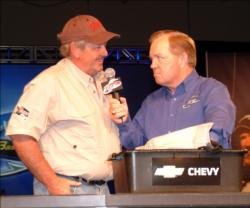 He said he caught most of his fish in 1 to 2 feet of water.

The third-place slot is being held down by Gary R. Edwards of Milton, Ky., a BFL veteran and first-time All-American competitor who qualified through the Chevy Trucks Wild Card. Today he sacked a 12-5 limit.

Edwards ran through two locks today, fishing mainly in pool 14 about 40 miles from the takeoff site in Rock Island, Ill. He also “fished 15 and 16 a little while, waiting on the locks,” for a total of about three hours of fishing time. He said he’s fishing a shallow “feeding area next to really deep water.”

“We’d catch a couple, then 10 to 15 minutes later … a few more would pull up shallow to feed, and we’d catch a couple more,” he said of the 15 keepers he and his co-angler partner Jade Keeton caught while casting to 2 to 4 feet of water.

Edwards said he caught three on a tube and five on a crankbait in fire-tiger color, the latter coming on “just a medium retrieve.” 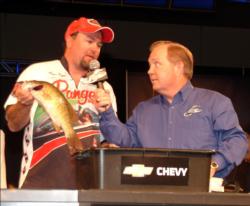 “I’d bump the crankbait off a rock on the bottom,” he said. “That’s when they’d bite.”

“I was excited about catching my first smallmouth – and I realized it was also my first All-American keeper,” Pope said.

In fifth place is Allan Cagle of Deltona, Fla., with five bass for 10-10. He is a veteran BFL boater and is 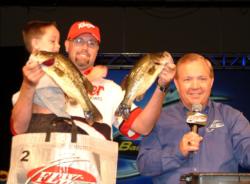 fishing in his seventh All-American. If he makes the cut tomorrow, it will be his third top-10 appearance in the championship.

Rounding out the top 10 boaters after day one of the 2009 Walmart BFL All-American:

The Folgers Big Bass in the Boater Division was caught by Jeff Holder of Bossier City, La. It weighed 4 pounds, 14 ounces and earned him $500. 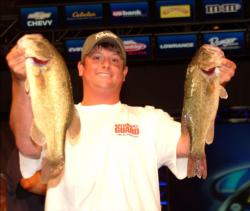 Dickson Adams of Woodstock, Ga., was one of only three co-anglers able to net a limit from the back of the boat Thursday, and he now leads the BFL All-American in his division with five bass weighing 11 pounds, 14 ounces. He’ll take a 2-pound, 3-ounce lead into Friday.

“I caught my fish today on a shallow-running crankbait and was targeting rock banks,” Adams said. “We stuck with our spot all day and fished the same place and just consistently caught fish.”

2008 marked Adams’ first year fishing the BFL, and he made the most of it, finishing the season ranked No. 8 among co-anglers in the Bulldog Division and finishing third in the BFL Regional that gave him his All-American berth. Fishing in 2009 as a boater in the same division, Adams stands to pocket up to $70,000 as a co-angler if he wins this week. 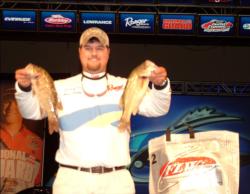 Florence, Alabama’s Jade Keeton holds down the second-place spot in the Co-angler Division with a 9-11 limit of bass. He qualified for this week’s All-American, his first, through last year’s Choo Choo Division. He also fishes in college events for the University of Northern Alabama.

Fishing with third-place boater Edwards, Keeton caught seven keepers today, all on a crankbait in fire-tiger color. He said his first four came pretty early, but he had to grind it out for the rest.

“Like it always seems to go in tournaments, I caught those first four in the first half-hour to 45 minutes of fishing time,” he said. “It took another three or four hours to catch that fifth one.”

Rounding out the top 10 co-anglers after day one in the Walmart BFL All-American:

Brown, in eighth place, caught a lone bass today, but it was a lunker that weighed 4 1/2 pounds. It earned him the Folgers Big Bass award worth $500.

All-American competition resumes Friday at 7 a.m. when the full field of 54 boaters and 54 co-anglers takes off from Sunset Park Marina in Rock Island.