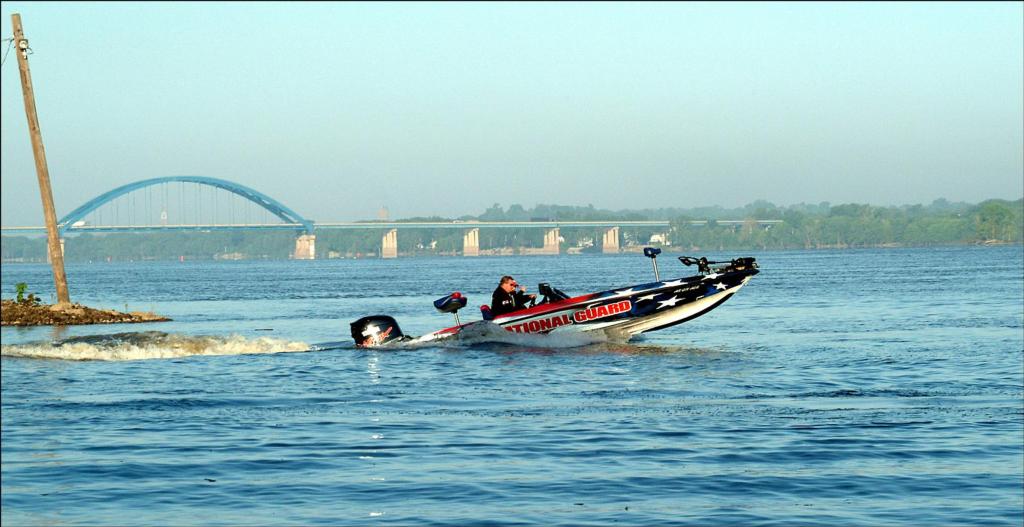 DAVENPORT, Iowa – Thunderstorms may be on the horizon Friday for the anglers competing on the Mississippi River this week in the Walmart BFL All-American. But you wouldn’t have guessed it by the calm, sunny conditions that greeted the competitors at this morning’s 7 a.m. takeoff on day two of the championship event.

And perhaps it’s an apt forecast for the cut day. For many of the 54 boaters and 54 co-anglers gathered in the Quad Cities of Iowa and Illinois – well, it’s going to rain on their parade. But things will be looking bright for the top 10 in each division who accumulate the heaviest two-day weights by day’s end, as they will advance to fish Saturday’s final round and further their quest to be crowned All-American champions.

But everyone competing this week on the Mississippi should be proud, whether they make the cut or not. These are the country’s best grass-roots tournament anglers, having emerged from 2008’s regular season of weekend competition across 28 divisions of the Bass Fishing League to compete in BFL Regional events for berths in the 2009 All-American. Every man – and the first female competitor in the championship’s quarter-century history, co-angler Belinda Lewis – will earn a paycheck in this no-entry-fee, all-expenses-paid event.

And for those who make the cut, there’s a chance at even greater rewards. The winning boater will earn $100,000 (with an additional $40,000 of boat- and engine-manufacturer’s incentives available), and the winning co-angler will receive $50,000 (and possibly an additional $20,000). On top of that, the ultimate champion in each division will earn a berth in the $2 million Forrest Wood Cup and compete 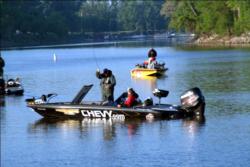 against the best touring anglers across FLW Outdoors’ bass circuits, including qualifiers from the Walmart FLW Tour.

Currently leading the All-American charge after the first day of competition is boater Adam Wagner of Cookeville, Tenn., with 15 pounds, 9 ounces. In the Co-angler Division, Dickson Adams of Woodstock, Ga., is in front with 11-14. Each holds roughly a 2-pound lead over the current runners-up.

Pools 13 through 17 on the Mississippi River are open to All-American competition. Many have reported the biggest bass are biting in the far upstream pools of 13 and, possibly to a somewhat lesser extent, 14. Wagner fished there on day one. However, making the trek north means cutting severely into fishing time due to distance and waiting for locks to open. And some found a strong bite nearer the takeoff site in Rock Island, Ill., on pools 16 and downstream at 17.

Anglers struggled to catch fish yesterday in the windy, overcast conditions, and many who were on a bite reported catching a lot of bass that didn’t measure up to keeper size. Crankbaits, buzzbaits, jigs and tubes seemed to be the baits of choice.

How today’s changing weather will affect the bite and which pools will yield the best bags remain to be seen. Additionally, a 4-pound kicker fish anchoring a limit could tip the scales of the tournament in a hurry. In other words, the All-American is still anyone’s to win.

giveaways courtesy of Cumulus Quad Cities and a home entertainment package giveaway on the final day of competition. Get full details online at FLWOutdoors.com/allamerican.

The shows and weigh-ins will be held at the RiverCenter located at 136 E. 3rd St. in Davenport, Iowa. The Family Fun Zone and Outdoor Show will open at 2 p.m. Friday, May 29. On Saturday, May 30, the show will open at noon. Daily takeoffs will be conducted at 7 a.m. from Sunset Park Marina in Rock Island, Ill., and weigh-ins each day will be held at the RiverCenter at 4 p.m. The home entertainment package winner will be drawn from the crowd during the final weigh-in. Admission and all activities are free. 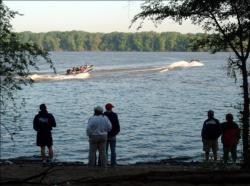 accumulated weight from all three days.

Water temperature at the ramp: 65 degrees

Day’s outlook: morning sunshine followed by isolated thunderstorms this afternoon – a few storms may be severe; winds NW at 5-10 mph; 30% chance of rain