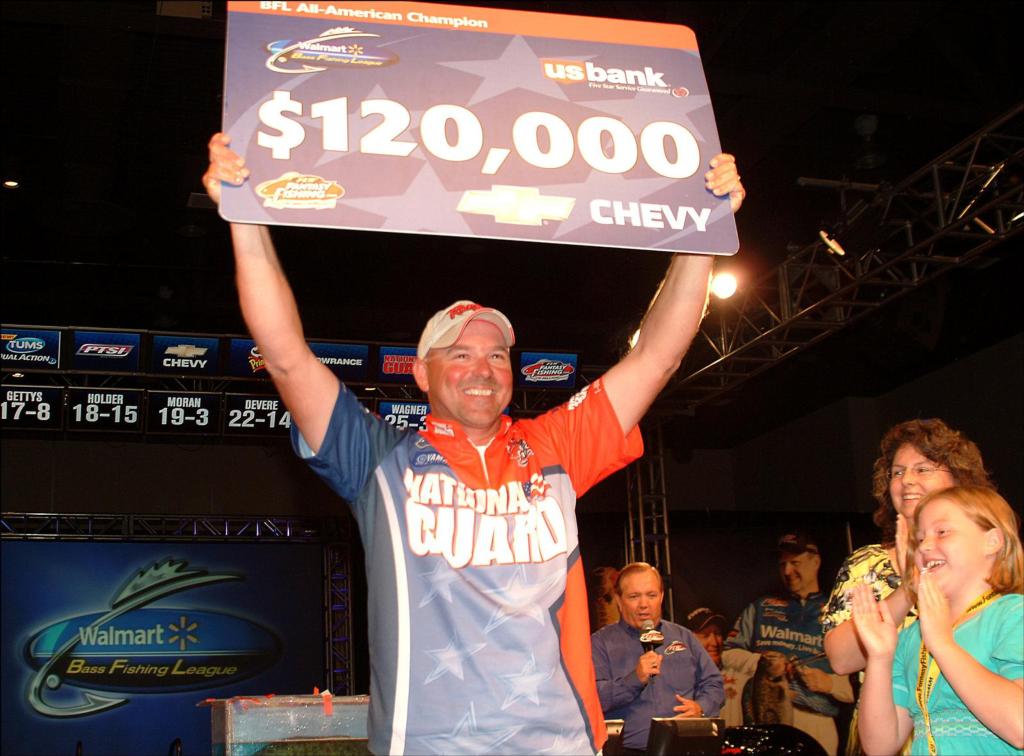 DAVENPORT, Iowa – It was said many times this week that fishing in the Walmart BFL All-American is a dream come true for a weekend tournament bass angler. Underscoring that sentiment is Adam Wagner, who completed his wire-to-wire victory Saturday on the Mississippi River with a three-day total weight of 36 1/2 pounds.

“I’ve dreamed of being a professional fisherman since I was 6 years old,” said Wagner, who fished in his third career All-American this week (he placed second in 2005 and 23rd in 2004).

His wife, Kimber, and 9-year-old daughter, Jordyn, were at the final weigh-in in Davenport, Iowa, to watch his dream come true today as he put four bass weighing 11 pounds, 5 ounces in the scale and then hoisted a check for $120,000 high above his head. Wagner will soon further his dream, as he is now qualified to fish against the best bass pros in the world in this year’s $2 million Forrest Wood Cup and eligible to compete on the Walmart FLW Tour in 2010.

Winning the All-American is the exclamation point on a season that has already been like living a dream for Wagner, who works as an equipment operator in Cookeville, Tenn. He’s already won two other Bass Fishing League events this year in the Music City Division, where he’s currently ranked No. 1 in the Boater Division with two regular-season events left to go. The rising star now boasts 20 top-10 finishes in BFL competition, including six wins, and $251,618 in FLW Outdoors earnings.

Wagner found his system during practice and never looked back. He fished pools 14 and 13 – the farthest eligible upstream from the takeoff site of Rock Island, Ill. – plucking keeper bass from each all 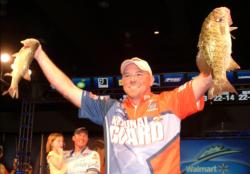 “I locked through to (pool) 13 every day,” he said. “I got lucky and found a couple fish in 14 … where I had about 40 minutes to fish each day before locking through. I’d usually catch three more in 13.”

The system was a gamble in that it only allowed him about an hour and a half of fishing time each day in pool 13, where he caught most of his bigger bass. In pool 13, Wagner landed his lunkers by swimming a ¼-ounce jig with a black skirt in grass and lily pads in about a foot of water or by fishing a green-pumpkin Senko when the bite called for it. In pool 14, he consistently flipped a Sweet Beaver with a 3/8-ounce tungsten weight to wood and lay-downs in the current in the main channel in about 3 feet of water.

Today he caught a big smallmouth in pool 16 near the takeoff site, the only fish he caught there all week. His final kicker fish looked great onstage, but was just icing on the cake as he won by an incredible margin of 9 1/2 pounds. His daily weights were as follows: day one, five bass, 15-9; day two (also his birthday – talk about a whirlwind week), five bass, 9-10; and day three, four bass, 11-5.

All week Wagner said he “came here to win it.” But despite his confidence in his pattern and determination throughout the week, when it was all said and done, he was still a bit overwhelmed.

“This is just unbelievable,” he said. 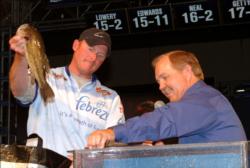 Steve Wagner of New Kent, Va., fished his way to second place in the Boater Division of the All-American with a three-day total weight of 27 pounds. He earned $25,000.

Being the runner-up sat fine with Wagner, who said: “I knew unless I pulled out a miracle today, he was going to win. I’m not disappointed.

“I made it here. I’ve only been fishing for four years.”

Fishing in his first All-American this week, Wagner now has five BFL top-10 finishes on his resume.

Wagner said he made a critical error on day one that may have cost him the win. He said he was boating farther upstream than anyone in the tournament, about 60 miles one way, where he had found several hot spots in practice. With only an hour to fish each day that far north in pool 13, he wasted precious time Thursday trying to recapture his success from practice.

“Those areas where the good fish were – the water dropped about a foot and the fish weren’t there,” he said of day one, when he only bagged four bass for 9-4 as he checked four other spots he’d previously located before locking on to a bite in a 40-yard stretch of water. “As soon as I got there, I knew the fish were going to be there.”

Locked on to a pattern, Wagner spent most of the rest of the week on that small area on Edick Lake flipping a 3 1/2-inch Strike King jig in June-bug color to heavy cover for his bass.

Fishing in his fourth All-American, boater Chris Baldwin of Lexington, N.C., climbed three slots on the final day to finish third with a three-day total of 22-15 worth $14,000 plus a $9,000 Ranger bonus.

“I started out in pool 13 the first day, the second day I fished pool 14, and today I stayed in pool 16,” Baldwin said of his combo-platter strategy.

After only catching three bass on day one, Baldwin said it was time to change it up on day two. He caught three bass in pool 14 Friday, but then caught two nice ones in pool 16 on the way back to the marina. 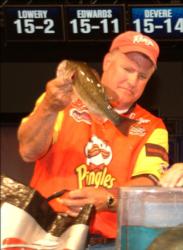 That convinced him to stay near the launch site today, where he reeled in three more bass to add 7 1/2 pounds to his total. Two largemouths came from a Zoom crankbait, and he caught his kicker smallmouth on a three-bladed War Eagle spinnerbait.

Devere, Moran round out top five

Devere fished areas in pool 14 each day that he found while practicing with another Berea native, co-angler Brian Ross who finished 20th in his division. Devere caught most of his bass this week on a ¼-ounce Brovarney swim jig with a Zoom twin tail in pearl-white color, targeting lay-downs and stumps in about 3 feet of water.

Boater Russ Moran of Manchester, Tenn., who has fished at every level of competition in FLW Outdoors bass circuits, finished fifth in his first trip to the All-American. His three-day total weight of 19- 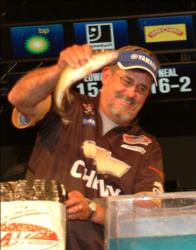 Moran spent the week in the minority, fishing downstream in pool 17, where he found slack water in a backwater lake with bushes. He caught most of his fish flipping a black-and-blue Strike King jig.

Rounding out the top 10 boaters to fish the final day of the 2009 Walmart BFL All-American: 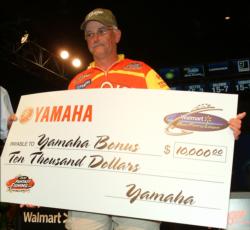