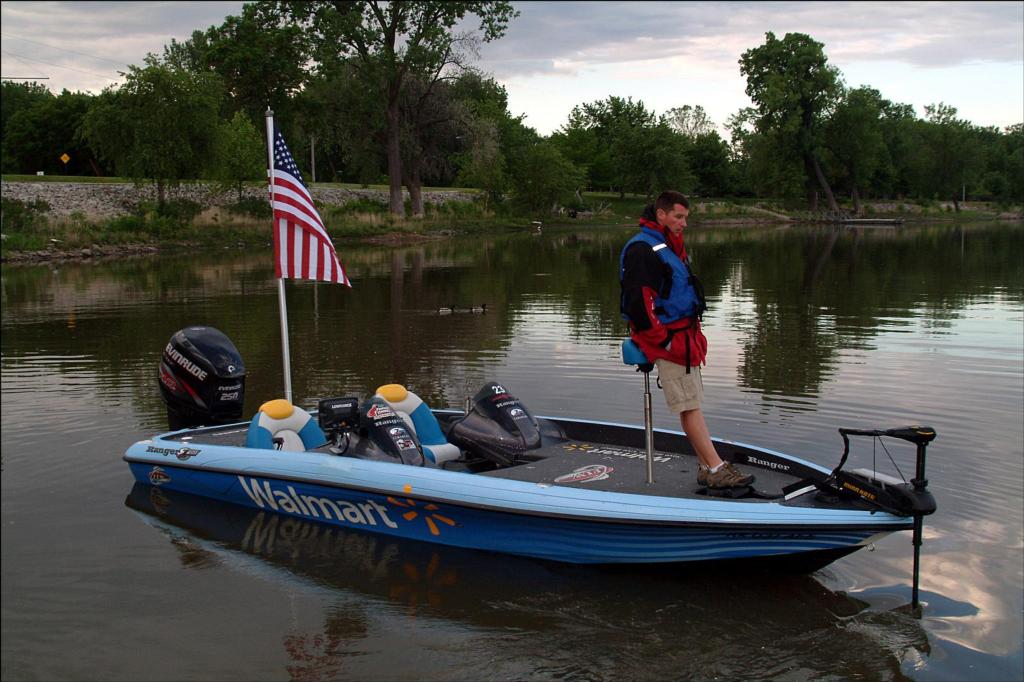 An FLW Outdoors official mans the Walmart start boat, awaiting the 7 a.m. takeoff on the final day of the 2009 BFL All-American on the Mississippi River. Photo by Patrick Baker.
May 30, 2009 • Patrick Baker • Phoenix Bass Fishing League

DAVENPORT, Iowa – Four one-day qualifiers. A two-day qualifier with extra standings points at stake. A regional. Two days of championship fishing against a field comprising the best of the best weekend anglers. That’s what the top-10 qualifiers had to tackle to make it to today: the grand finale of the 2009 Walmart BFL All-American championship.

And all 10 boaters and 10 co-anglers seemed up to the challenge of a final day of fishing on the Mississippi River as they prepared for takeoff Saturday morning at Sunset Park Marina in Rock Island, Ill. Adding to the pressure of such a moment is the TV element, in which each of the 10 boats will be trailed by a camera boat to capture all the action for the “FLW Outdoors” program on VERSUS (to air Aug. 23 at 12:30 p.m. Eastern).

Some appeared animated with anticipation; some seemed steely as they got on their game faces. But nobody looked shocked to be there. And after proving their mettle throughout the entire 2008 Bass Fishing League season and over the last couple days, why should they? This is their time.

Third-place boater Russ Moran has competed at the highest levels of professional bass fishing, and his wisdom gained through experience was on display. He seemed undaunted by the fact that he’ll need to make up nearly an 8-pound deficit if he is to catch up to tournament leader Adam Wagner, who has 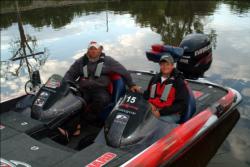 amassed 25 pounds, 3 ounces over the opening two days of the tournament.

Said Moran: “Mistakes are what kill you in this game. The thing about bass fishing is, I have no control over what these guys do.

“You can’t catch five bass at a time, you can only catch one. After I get one, I go for No. 2. If you set small goals like that, it doesn’t seem so overwhelming.”

About 10 1/2 pounds separate first place from 10th in the Boater Division, while roughly 6 1/2 pounds mark the gap between first and 10th in the Co-angler Division. The bass haven’t come easy from this stretch of the Mississippi River – pools 13 to 17 – for those competing this week in the All-American. However, there have been a number of 4-pound-plus fish weighed in over the first two days, so anything is still possible Saturday. Anybody who could anchor a five-bass limit with one or two such kicker fish has a shot at glory. 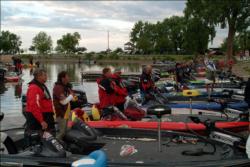 possible $20,000 available. The All-American champion in each division will also earn a trip to the prestigious $2 million Forrest Wood Cup, where they will compete against the best qualifying anglers across all FLW Outdoors bass circuits.

The All-American will feature a Free Family Fun Zone and Outdoor Show with children’s rod and reel giveaways courtesy of Cumulus Quad Cities and a home entertainment package giveaway on the final day of competition. Get full details online at FLWOutdoors.com/allamerican.

The show and weigh-in will be held at the RiverCenter located at 136 E. 3rd St. in Davenport, Iowa. The Family Fun Zone and Outdoor Show opens today at noon, and the final weigh-in begins at 4 p.m. The home entertainment package winner will be drawn from the crowd during the final weigh-in. Admission and all activities are free.

In BFL competition, boaters and non-boaters are randomly paired each day, with boaters supplying the boat, controlling boat movement and competing against other boaters. Non-boaters fish from the back deck against other non-boaters. The full field of 108 anglers competed over the two-day opening round 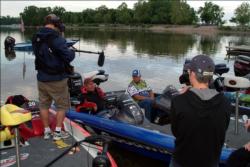 Water temperature at the ramp: 66 degrees