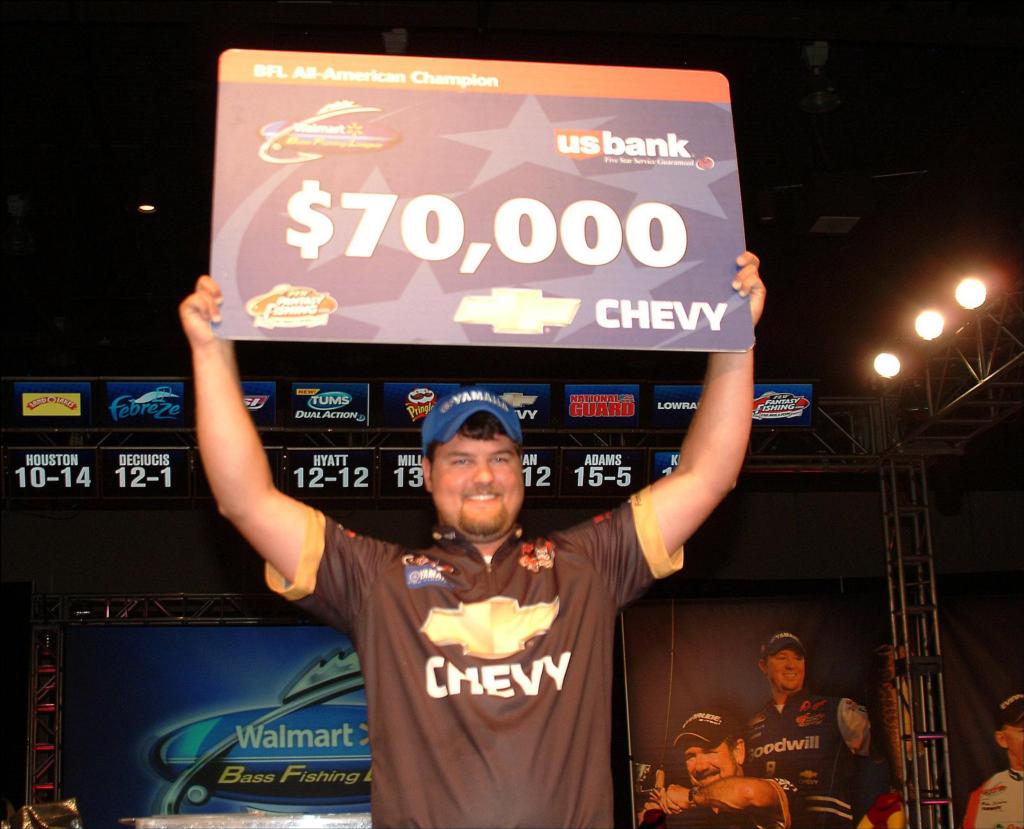 Jade Keeton of Florence, Ala., brought in the only five-bass limit on the final day of the All-American to win in the Co-angler Division, earning $70,000. Photo by Patrick Baker. Angler: Jade Keeton.
May 30, 2009 • Patrick Baker • Phoenix Bass Fishing League

DAVENPORT, Iowa – Jade Keeton of Florence, Ala., is one good son, not to mention a heck of an angler. He made his mom proud Saturday, winning the Co-angler Divison of the Walmart BFL All-American on her birthday. With his $70,000 top prize, getting a present shouldn’t be a problem.

Not even halfway through 2009, Keeton is experiencing the year of a lifetime. Not only did he come from behind to claim the All-American title with a three-day weight of 18 pounds, 5 ounces – bringing his mother, Carol, to tears of joy during the weigh-in – he also was recently engaged to be married to Lakin Pointer, who was also in the Quad Cities this week to support him.

When asked what he would do with his earnings, which included $20,000 in contingency awards including a Ranger bonus, Keeton said: “First, I’ll pay off that Ranger boat I got … and there’s a house planned in the near future, whether we buy or build.”

Keeton is already building quite a reputation as a competitive bass angler. He fishes the National Guard FLW College Fishing circuit, currently in its inaugural season, representing the University of Northern Alabama. He qualified for this year’s All-American after fishing his first full season in the Bass Fishing League in 2008 as a co-angler in both the Choo Choo and Bama divisons, and he’s fishing the Bama Division this year as a boater. He said he may try fishing the Stren Series in 2010. 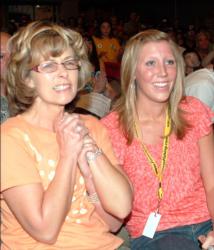 With the performance Keeton gave on the Mississippi River this week, he’s clearly a skilled fisherman. He sacked a 9-11 limit on day one, fishing behind pro Gary Edwards; zeroed on day two; and then fished with boater Chris Baldwin on day three to net the only five-bass limit of the day in the Co-angler Division, weighing 8-10, to crawl out of sixth place and enter the winner’s circle.

Keeton said he and Baldwin stayed near the takeoff site Saturday, fishing pool 16 to allow themselves more fishing time, “burning probably less than 3 or 4 gallons of gas.” Keeton sacked his limit today flipping a black-and-red tube to 2 to 3 feet of water. He said his pattern Saturday “all had to do with current – and wing dams.”

“There are some great co-anglers up here,” Keeton said, acknowledging the stiff competition he faced. “I knew if I could just go out and catch my limit … hopefully the rest would take care of itself.”

Keeton also acknowledged his father from the weigh-in stage, who he hoped was watching him online via FLW Live so he could thank him for picking up the slack during the week at their family business.

Illustrating that fishing has truly been a theme in their family, Carol Keeton said, “We bought him his first flat-bottom boat when he was 12, and he’s fished ever since.”

Don’t look for that to change anytime soon.

Dickson Adams of Woodstock, Ga., led the Co-angler Division over the first two days of All-American competition on the Mississippi River, starting it off with a five-bass limit weighing 11-14. But he only boated a keeper a day over the next two days, winding up with a three-day total of 15-5 for second place and $15,000. 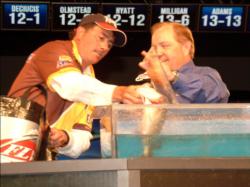 Rounding out the top 10 co-anglers to fish the final day of the Walmart BFL All-American: