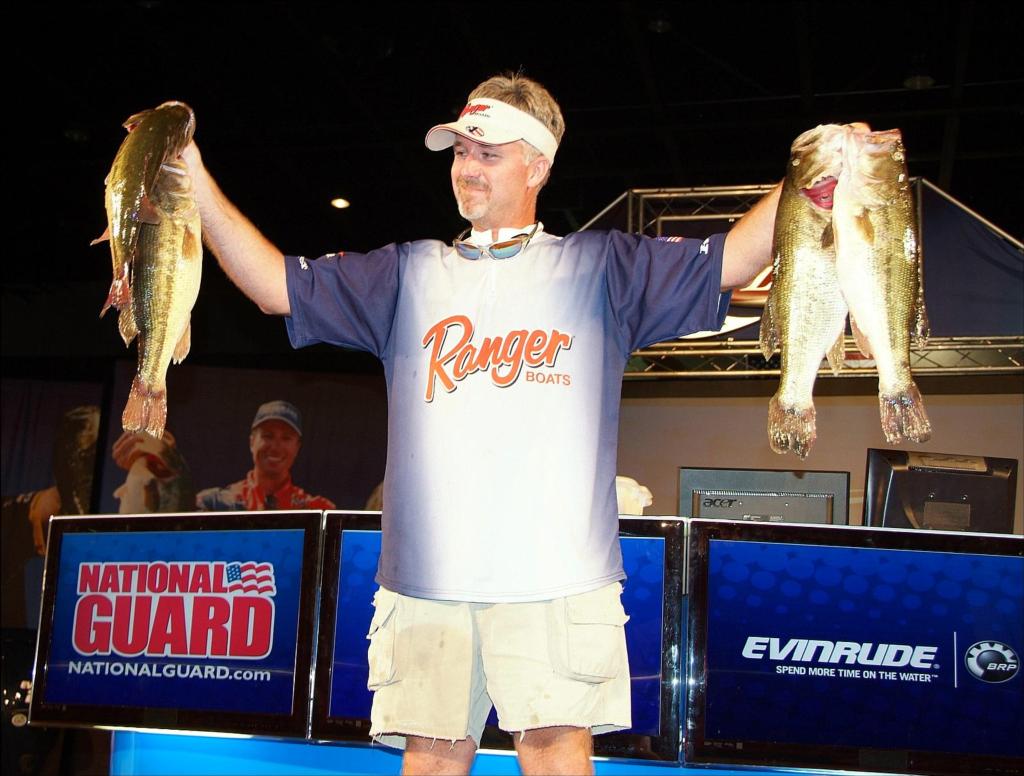 Boater Jason Grape of Southside, Ala., leads day one of the 2010 BFL All-American on DeGray Lake with five bass for 17-13. Photo by Patrick Baker.
May 27, 2010 • Patrick Baker • Phoenix Bass Fishing League

HOT SPRINGS, Ark. – Some would call it luck: Jason Grape qualified for his first BFL All-American through the Chevy Wild Card, a last-chance tourney for those who don’t make the championship via regionals; he’d never fished DeGray Lake until one day before the off-limits period kicked in earlier this month; and he made a last-minute decision to fish deep Thursday, when he’d been mixing it up depth-wise during Wednesday’s official practice day. But Grape’s 4-pound-plus lead defies luck and speaks to great angling instincts.

And further inspection of the Southside, Ala., boater’s resume reveals even more: eight top-10 finishes in FLW Outdoors events, including two wins – a BFL Bama event on Lake Guntersville in 2006 and a Music City Division win on Percy Priest this year. In less than eight years as a boater, he has earned more than $25,000 in FLW events. With a whopping 17-pound, 13-ounce limit today – which would have been a pound heavier if not for two dead-fish penalties – Grape has positioned himself as the front-runner to win five times that much money in the 2010 All-American.

“I just changed my whole strategy,” Grape said of his 11th-hour decision this morning to stick to one depth on only one of his three primary areas. “I told myself I was going to stay deep all day, and that’s what I did.”

As stated earlier, Grape isn’t very familiar with DeGray, but he said he believes the honeyhole he mined today is located on the upper end of the reservoir. He fished Bo’s football-head jigs – 1/2-, ¾- and 1-ounce models in black-and-blue color – mainly with a black Paca Craw trailer in 25 to 32 feet of water.

“It’s a ridge with a lot of baitfish on it and balls of shad,” said the granite countertop salesman. “I left a lot of good fish there, so I hope I can go get them tomorrow.”

Sitting 4 pounds, 1 ounce ahead of second place, Grape will have the luxury of moving to one of his other spots or targeting smaller bass tomorrow to stay in the hunt, though he’d rather not have to rely on the latter.

“During practice I was fishing shallow … keeper fish, but those kind of little ones won’t do nothing.”

The “nothing” that Grape described left many of the 55 boaters and as many co-anglers scratching their heads by day’s end. With a minimum length limit of 12 inches on all DeGray bass – largemouth, smallmouth and spotted – largemouths between 13 and 16 inches being off limits, and only being able to weigh two smallmouths per day per Arkansas Game and Fish regulations, a good portion of the field struggled Thursday. 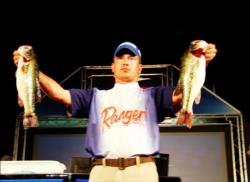 Add to that a slick, calm day on the water during which fisherman after fisherman reported losing fish, and there were very few five-bass limits weighed. Only a dozen limits were registered by the Boater Division and only two in the Co-angler Division.

Another boater who excelled despite a tough day-one bite was Troy Morrow, who qualified via the Savannah River Division and sacked a 13-12 limit Thursday. Like Grape, Morrow is no stranger to FLW Outdoors competition: He has earned nearly $35,000 since 1997 and has notched 11 top-10 finishes.

Though some of the Toccoa, Ga., angler’s bass came unbuttoned today, he maintained confidence in his pattern – unrevealed thus far – to serve him well on day two.

“I can still see the ones that got away today,” Morrow lamented onstage, but added, “I think I’m going to have a good shot at it.” 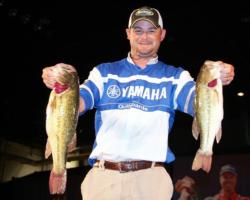 In third place and only 6 ounces behind Morrow at the end of day one was boater Brad Hallman of Norman, Okla., who sacked a limit weighing 13-6.

Hallman – who qualified for the All-American via the Chevy Wild Card – is a longtime BFL boater with five top-10 FLW finishes, including a 2003 win on Lake Eufaula, and nearly $65,000 in career earnings to his credit. He said he likes how All-American competitors get only one short practice day before the championship after a weeklong-plus off-limits period.

“I’m really liking this format,” he said. “It really allows you – forces you – to fish in the moment.”

Past All-American champion in the hunt again

Moore, Oklahoma’s Shonn Goodwin is about as successful of a BFL boater as has ever competed in the league. Since 1995 he has strung together an amazing 22 top-10 finishes, including five wins, and nearly $175,000 in career earnings in FLW Outdoors competition, most of it coming from the BFL. He wound up fourth today with a limit weighing 12 pounds, 6 ounces.

Surprisingly, 2010 marks only his second All-American appearance, though he did win it – and $100,000 – in 2007. Goodwin made no bones about his hunger for another championship victory this week.

Goodwin qualified for this year’s main event via the Okie Division and a Regional Championship on none other than DeGray Lake. Without a doubt, this BFL phenom will be one to watch this week as competition unfolds.

Boater Jay Brewer of Collinwood, Tenn., qualified for the All-American via the Bama Division and has

three BFL wins under his belt. He ended day one in fifth with four bass four 11 1/2 pounds. He said he “got something figured out on the lake today,” so he’s hopeful about his chances to make the top-10 cut tomorrow to fish the final day Saturday.

Rounding out the top 10 boaters after day one of the BFL All-American presented by Chevy on DeGray Lake: 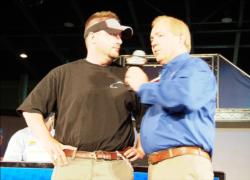 Co-angler leader is Due

Mauston, Wis., co-angler Ben Due is nearly 2 pounds ahead of the pack after day one of the BFL All-American on DeGray Lake after sacking a five-bass limit weighing 11 pounds, 10 ounces that would’ve gone a pound better if not for a double dead-fish penalty. Due fished in the midlake area today with boater Patrick Bone.

“We fished fairly deep, outside of spawning coves,” he said, adding that he caught all his fish today in 15 to 20 feet of water on a Carolina rig with a Baby Brush Hog in green-pumpkin color.

Coming from up North, Due grew up fishing river systems with much more current and much less water clarity and depth than DeGray Lake. However, he has cut his teeth in FLW Outdoors events from the back of the boat, earning two co-angler points titles over the last couple of years in the BFL Great Lakes Division as well as the co-angler points title in the FLW American Fishing Series Central Division this year. His AFS experience served him well today, as he didn’t prefish for the All-American, unless you count the Central Division tournament he fished on Lake Ouachita (also near Hot Springs, Ark.) last month.

“I had a little idea of what to expect as far as clarity and scenery,” Due said, adding that “keeping a positive attitude until the last cast of the day” is the secret to his back-deck success. 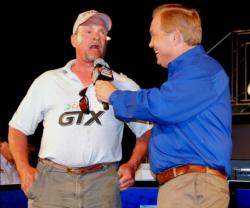 Due said he’ll fish a Carolina rig again tomorrow if his draw allows for it.

David Hamilton of Rogers, Ark., found himself in second place in the Co-angler Division Thursday with four bass for 9-15, leaving him 1 pound, 11 ounces off the lead. Hamilton fished with boater Roger Pope on day one.

“All the credit really goes to (Pope),” Hamilton said. “I had a great pro, and he put me on fish.

“I’ve fished the (FLW) Tour, the (FLW) Series, AFS – if you want to learn how to fish, let me tell you, Come out and fish the BFL and qualify for the All-American. These are hands down, top to bottom, the best bass fishermen in the world.”

Rounding out the top 10 co-anglers after day one of the BFL All-American on DeGray Lake:

All-American action resumes Friday on day two, when the full field will take off at 7 a.m. from the U.S. Army Corps of Engineers spillway area on DeGray Lake, located at 284 Skyline Drive in Arkadelphia, Ark.