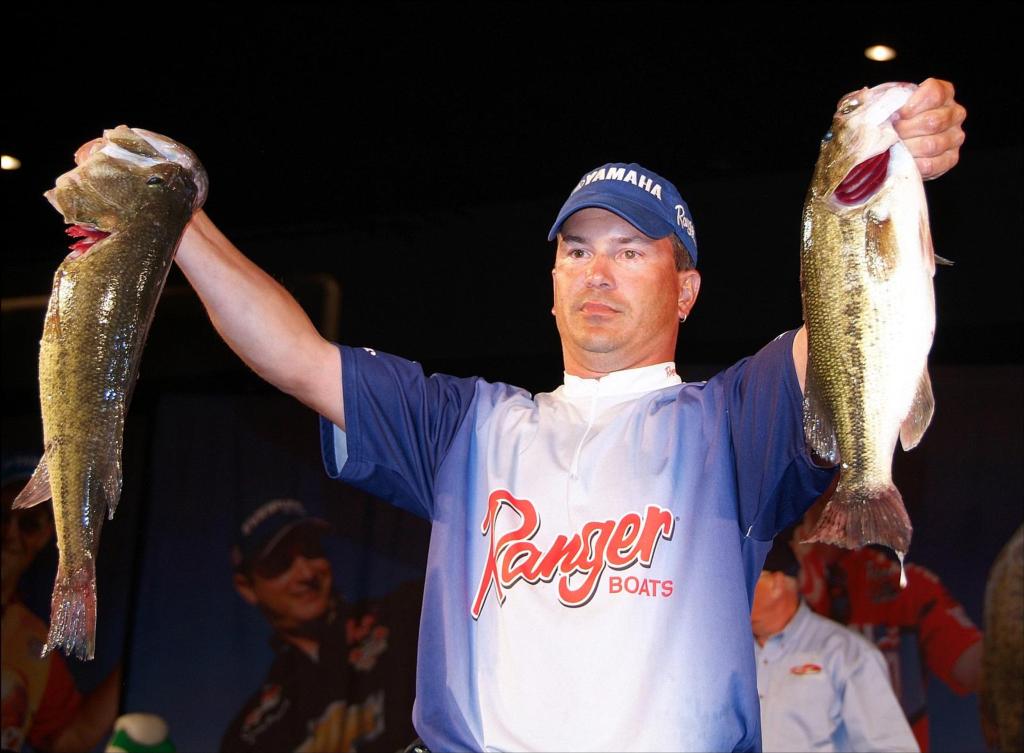 HOT SPRINGS, Ark. – At the end of Friday’s BFL All-American weigh-in at Summit Arena, it became apparent why boater Troy Morrow was a bit tight-lipped about his fishing on Thursday: It wasn’t a fluke – the man’s on fish. He improved on his day-one weight by 2 pounds, 10 ounces for two-day total of 30-2, good enough to step from second into the lead with one final day of championship fishing to go.

“I’m still losing some; I can’t get around that,” said the Toccoa, Ga., boater, who at least allowed on day one that he’d lost some bites, leaving one to wonder what weight he could extract from central Arkansas’ DeGray Lake if he executed perfectly.

“It was a good day today,” he continued, adding that his plan for Saturday is to “do it all over again … we’re ready to go.”

Morrow qualified for the All-American via the Savannah River Division and a 2009 BFL Regional Championship on North Carolina’s Lake Norman. He said he has been able to apply techniques from there to his as-of-yet-unspecified pattern on DeGray.

“I came down here and was able to do the same thing,” he said. “I like clear water, and I’ll tell you a little more about why tomorrow.”

Morrow did reveal that he’s not fishing near shore and that he’s covering a lot of water. If he can maintain this pace, he’ll undoubtedly have a great fishing story for the event’s finale.

Watkins doubles down for second 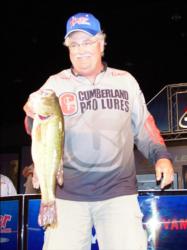 weighing 16 pounds, 12 ounces for a two-day total of 25-6 and the runner-up slot in the Boater Division. He’ll need to make up a 4-pound, 12-ounce deficit to take home the championship trophy, but he said he believes his area has the potential.

“These fish are just unbelievably hard to catch,” he said, adding that two sizable bass jumped off his line yesterday. “I feel real good about my area. I could catch 17 pounds, or I could zero.”

Watkins said an angler would have to “be about half-crazy” to fish the way he is due to the long stretches of inactivity between bites and how hard his largemouths have been to solidly hook. He’s fishing about a dozen spots along a six-mile stretch of the midlake area – points and islands on the main body of water. To catch the majority of his fish, he’s swimming a 3/8-ounce black/blue Pro Cast jig made by Cumberland Pro Lures with a black/blue Berkley Critter Chunk. He’s landed his kicker fish each day fishing isolated willows.

“I’m fishing supershallow … not getting a lot of bites,” he said. “You’ve got these wolf packs of bass cruising in and out of the shallows, and if you can get them hooked, you’re set. The fish are there, but once you spook `em, your not going to catch them again in that spot.”

Watkins – the 2005 Co-angler of the Year on the FLW Tour, veteran tournament angler and an AT&T employee – is fishing in his third All-American and has already surpassed his prior best finish of 16th place.

“I just need to stay focused and make good decisions,” he said of his plan for Saturday. “That’s what 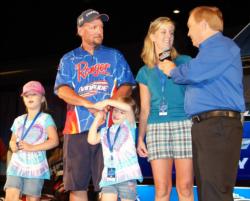 Boater Richie Eaves of Nauvoo, Ill., who qualified for his second All-American via the Illini Division and a regional win in 2009 at Fort Madison, bettered his day-one weight by 5 ounces with a five-bass limit Friday for a two-day total of 22-1. He’s bolstered his trio of spotted bass each day with two largemouths.

“I’m staying in the lower end … not maybe 10 minutes up the lake [from the U.S. Corps of Engineers launch site at the spillway area], and then back and forth,” he said.

Eaves is investing about five minutes apiece on a variety of brush piles in that stretch, hoping to land his over-slot largemouths. Otherwise he’s mining an underwater ridge that’s holding fatter spots that he said are “gorging themselves on shad.” His better bites have come on topwater baits – Lucky Craft Sammy or a Super Spook Junior – while the rest have fallen for a finesse worm on a ¼-ounce weight or 1/2- to ¾-ounce jigs. When not on top, he’s fishing at depths of 20 to 25 feet.

In fourth place Friday was boater Brandon Palaniuk of Rathdrum, Idaho, who qualified for the All-American via The Bass Federation. He improved his day-one weight by a pound today with four bass that weighed 11-7, giving him a two-day total of 21-14. He said he’s fishing an area about 200 yards wide by 400 yards long on the lower end of the lake. 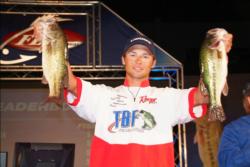 “I have one area that I’ve had to myself all week,” he said, adding that they are feeding so aggressively that they can be hard to hook. “Those fish, they get in there and they school up on the shad. It’s an area where lots of big fish live. I know I’ve got the fish there to win it, I just have to stay on them … because they’re on fire … sometimes I think they’re a little bit meaner than I am.”

He said there are probably five or six key differences in the backwater stretch that he’s fishing where the big schooling fish are holding when they move in from deeper water. He’s catching them at depths of anywhere from 1 to 30 feet depending on the section of his stretch, though the majority have come from about 7 or 8 feet of water. He’s fishing a BaitSmith Shad swimbait, a Zara Spook and a Senko.

Green moves up a slot to fifth

Local boater and veteran bass pro Keith Green of Arkadelphia, Ark., is in fifth place with a two-day total of 21-4. He qualified for this year’s All-American via a Regional Championship last fall, also held on his home water of DeGray Lake.

Green said he’s fishing “a lot of topwaters and worms – it’s just the fish aren’t biting that well,” a sentiment echoed by many other fishermen across the field. The former FLW Tour pro has already earned nearly $165,000 in FLW Outdoors events in his career and stands to substantially increase that amount tomorrow.

“They’re out there,” he said. “I know where they live; I just have to go out there tomorrow and get them … even with all the Jet Skis and party barges and everything else.”

Rounding out the top 10 boaters to make the cut and fish a final day in the All-American presented by Chevy on DeGray Lake: 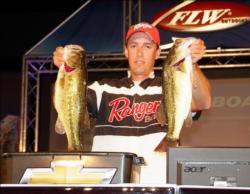 Brett Rudy of Burlington, Iowa, hooked three DeGray Lake hogs Friday to climb 17 slots and take over the Co-angler Division lead on day two of the All-American presented by Chevy. His big ones weighed in at 12 pounds today, giving him a two-day total of 15-6 across four bass. This week marks the firefighter and paramedic’s first foray into All-American competition, for which he qualified via the Great Lakes Division.

On day one, FLW Outdoors CEO and weigh-in host Charlie Evans remarked that Rudy’s professional resuscitation skills could be of great value anywhere he goes. On Friday, Rudy joked that he momentarily thought he might need to be the recipient of such medical help when he “almost had a heart attack” as each one of his big DeGray largemouths tried to jump off his line.

“I don’t know why all those big ones have to jump like that, but they all did,” Rudy said.

Rudy fished today with TBF National Championship winner Jay Keith in the lower end of the main lake. Rudy landed his first two early in the day at about 8 a.m. on a Carolina rig and landed his approximately 5-pound kicker at about noon on a Texas rig, both set-ups incorporating either Zoom Brush Hogs or Sweet Beavers in natural colors like watermelon.

“We fished fairly shallow today – about 3 to 15 feet [deep],” Rudy said, “mainly on points of islands.

Rudy will carry a 1 1/2-pound lead into the final day. Though he’s a bit uncomfortable leading the 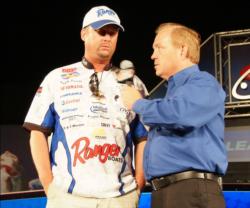 tournament – “I’ve got a target on my back” – he said he’s confident in fishing a Carolina rig regardless of how his boater fishes Saturday.

“With the Carolina rig, you can drag it any which way – from deep to shallow, from shallow to deep,” he said. “It doesn’t really matter.”

Pierson takes a big step up to second

Randy Pierson of Oakdale, Calif., landed one of the few five-bass limits in the Co-angler Division today for 11-9 and a big trip up the leaderboard to second place. With his 2-5 single from day one, he now has a two-day total of 13-14.

“It was a day where everything went right,” he said. “I didn’t catch any slot fish; I caught everything that bit.”

Rounding out the top 10 co-anglers to fish the final day of All-American competition on DeGray Lake: 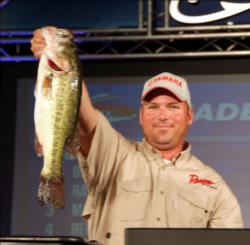 All-American action resumes Saturday, when the top 10 boaters and 10 co-anglers will take off at 7 a.m. from the U.S. Army Corps of Engineers spillway area on DeGray Lake, located at 284 Skyline Drive in Arkadelphia, Ark.