A Chevy-wrapped Ranger boat speeds toward a final day of competition in the 2010 BFL All-American presented by Chevy on DeGray Lake. Photo by Patrick Baker.
May 29, 2010 • Patrick Baker • Phoenix Bass Fishing League

HOT SPRINGS, Ark. – It all comes down to this for the top 10 boaters and 10 co-anglers in the 2010 BFL All-American presented by Chevy: one last day on DeGray. In 24 divisions across the nation, these grass-roots bass anglers navigated through a season’s worth of qualifying events in 2009 and then proved their mettle with top finishes in regional competition, surpassing countless weekend competitors along the way, for a shot at a championship title.

Heading out onto central Arkansas’ clear, still DeGray reservoir Saturday morning in the No. 1 boat were the current leaders: Troy Morrow of Toccoa, Ga., in the Boater Division and Brett Rudy of Burlington, Iowa, in the Co-angler Division. If they hope to clinch the top boater and co-angler awards of up to $130,000 and $60,000, respectively, they’ll need to string one more good day of fishing onto already-impressive BFL track records.

For the time being, Rudy’s two-day total weight of 15 pounds, 6 ounces across four bass gives him a 1 1/2-pound head start against the current runner-up co-angler. Morrow has managed impressive five- 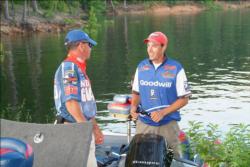 bass limits both days for a two-day total of 30 pounds, 2 ounces, leaving him a solid 4 pounds and 12 ounces in front.

Despite his healthy lead in the Boater Division and confidence in his patterns, Morrow is still haunted by lost fish Saturday morning before the final takeoff.

“I’ve just got to not break some big ones off today,” he said, adding he figures he’s left 12 pounds’ worth of bass in DeGray over two days. “That has really hurt me. I should’ve not had to have been fishing today basically.”

Morrow has yet to specify his specific patterns, but has said DeGray’s clear water is a key as well as variety across locations that don’t include fishing near shore. He said he has 92 waypoints programmed into his GPS unit for the All-American.

“I’m doing three different things, so if the wind changes a little, I can just move to another spot.”

Weather conditions today will be similar to what the field experienced over the first couple days of competition: mostly sunny with light and variable winds, temperatures in the upper 80s and considerable humidity. So far, that set-up has worked fine for Morrow while challenging some of the others who would prefer a little more wind and cloud cover.

And while Morrow is confident in his patterns and locations, he’s not even close to the only boater out there to lose a monster DeGray largemouth or two. Translation: Anyone is still a threat to win the All-American championship title. 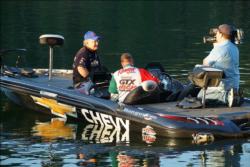 Fans will be treated to the FLW Outdoors Expo at the Hot Springs Convention Center prior to the final weigh-in from 10 a.m. to 4 p.m. There will be a drawing for a Can-Am ATV, and rod and reel combos will be given to the first 300 kids under 14 in attendance Saturday. The FLW Outdoors Expo includes Ranger boat simulators as well as the opportunity to interact with professional anglers, enjoy interactive games, activities and giveaways provided by sponsors, and to learn more about the sport of fishing and other outdoor activities. All activities are free and open to the public. For a full schedule of events, additional information and to register for the ATV, visit FLWOutdoors.com/chevyopen.

Coverage of the BFL All-American tournament will be broadcast in high definition (HD) on VERSUS. “FLW Outdoors” will air Nov. 28 from 12:30 to 1:30 ET. “FLW Outdoors,” hosted by Jason Harper, is broadcast to approximately 500 million households worldwide.

For bass-fishing fans unable to attend the festivities in person, you can catch all the weigh-in action live at FLWOutdoors.com with FLW Live. Show time starts at 3 p.m. Central today.

Water temperature at the ramp: 83 degrees