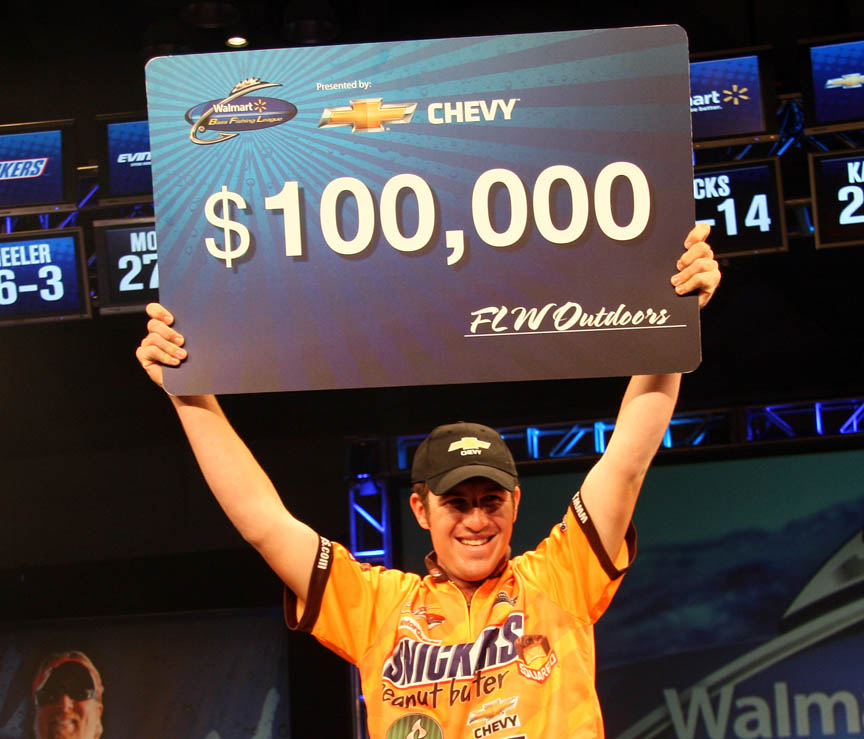 SHREVEPORT, La. – The only downside of Jacob Wheeler’s BFL All-American victory on Cross Lake was that his margin shrunk by 6 ounces.

Going into the final round, the Indianapolis boater held a 9-pound, 8-ounce advantage over his nearest competitor. Today, he bolstered that 28-10 mark with a limit weighing 7-9 and ended with a three-day total of 36-3 and a margin of 9-2.

Wheeler will probably overlook that stat, in favor of two more significant numbers. The first is 20 – his age makes him the youngest angler to win a BFL All-American. The other is $100,000 – his tournament winnings. Icing that cake is a berth in the 2011 Forrest Wood Cup presented by Walmart on Lake Ouachita, Aug. 11-14.

“I’ve been fishing since I was four and I’ve always wanted to be a professional fisherman,” Wheeler 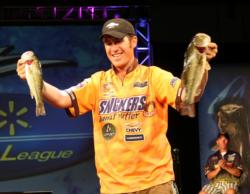 said. “All I do is fish – I’m ate up with it. So, winning something like this means the world to me.”

Notably, Wheeler not only competed against 48 of the BFL’s top boaters, he also competed with Mother Nature and a lake with an extra level of challenge. Wind and clouds dominated the first two days and, while day three saw a few partly sunny periods, a strong blow persisted as thunderstorms moved through the area.

On top of all this, Cross Lake has a protected slot limit of 14 to 17 inches. That means anglers can only keep fish of at least 12 inches (statewide minimum), but under 14, and those over 17. Of the tournament’s 5-bass limit, only four could be over 17. Needless to say, winning on a slot limit lake is no easy feat.

Wheeler set the bar high on day one by weighing the event’s heaviest sack – a limit of 18-6 that gave him the lead by 7 1/2 pounds. The next day, one of his key factors – water drainage from a local aquaculture farm – disappeared and the week’s strongest winds limited where he could fish. Wheeler 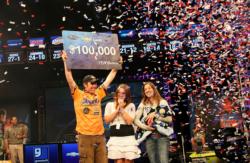 bagged a decent limit of 10-4 and held the lead.

Today, he fished about 30 spots with a mix of cypress trees and docks. One of his fish came early on a shad colored Pop-R fished near a cypress tree and the others bit a green pumpkin tube. Skipping the tube far under docks was essential to finding the fish, Wheeler said.

Going into the final round with such a commanding lead could have easily lured an angler into a false sense of security, but Wheeler kept things in perspective, thanks in part to his younger sister Kaitlin who met him at the dock each morning for a pre-launch prayer. That quiet time, he said, helped him remain humble and realize that he had to go out and fish smart regardless of his advantage.

“My mindset was to go catch five – whatever they may be, go catch five fish and go from there,” Wheeler said. “It worked out beautifully.”

Starting the day in eighth place, Jake Morris, of McKee, Ky., caught just three fish in the final round, 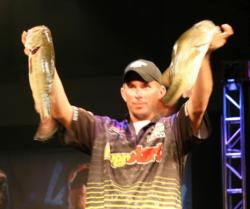 but his 11-pound, 13-ounce bag was the day’s heaviest. After catching 8-5 and 6-15 on the first two days, Morris made a change on day three that delivered the big bites and gave him a tournament total of 27-1.

“The first two days, I fished crankbaits all over the lake, catching a few here and there,” he said. “Today, I figured I had to do something different to try and catch some bigger fish, so I tied on a Rico popper and a frog and went as shallow as I could.”

Morris caught two of his fish on the bone colored Rico, lost a big one on the black and yellow frog and caught his third on a green pumpkin 3/8-ounce jig with a Zoom Super Chunk trailer pitched under a dock. The topwater fish bit in the morning and the jig fish came around 1 o’clock. 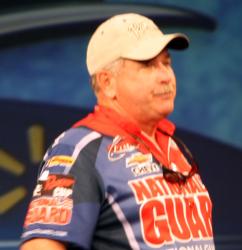 Charles Cummings, of Leeds, Ala., improved from seventh place to third in the final round with a three-day total of 24-10. Cummings caught the only other limit of day three – his weighed 8-3. He caught 7-6 on day one and 9-1 on day two.

Opting to get away from the banks where the rest of the field was pounding the boat docks and cypress trees Lloyd Pickett, of Barlett, Tenn. focused on working ledges in six to seven feet with Carolina rigs. His plan took him to second place on day one with 10-14, but windy conditions got the better of him yesterday and today. Day two saw Pickett catch 7-12 and slip to third. Today, he caught only two fish for 4-12 and lost another spot to finish fourth with 23-6

“Today, there was just too much wind,” Pickett said. “I tried to stay out there and fish as best I could, but it was just too rough. It was rockin and rollin out there.” 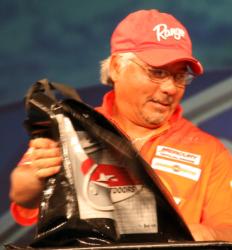 Craw and a Zoom Brush Hog.