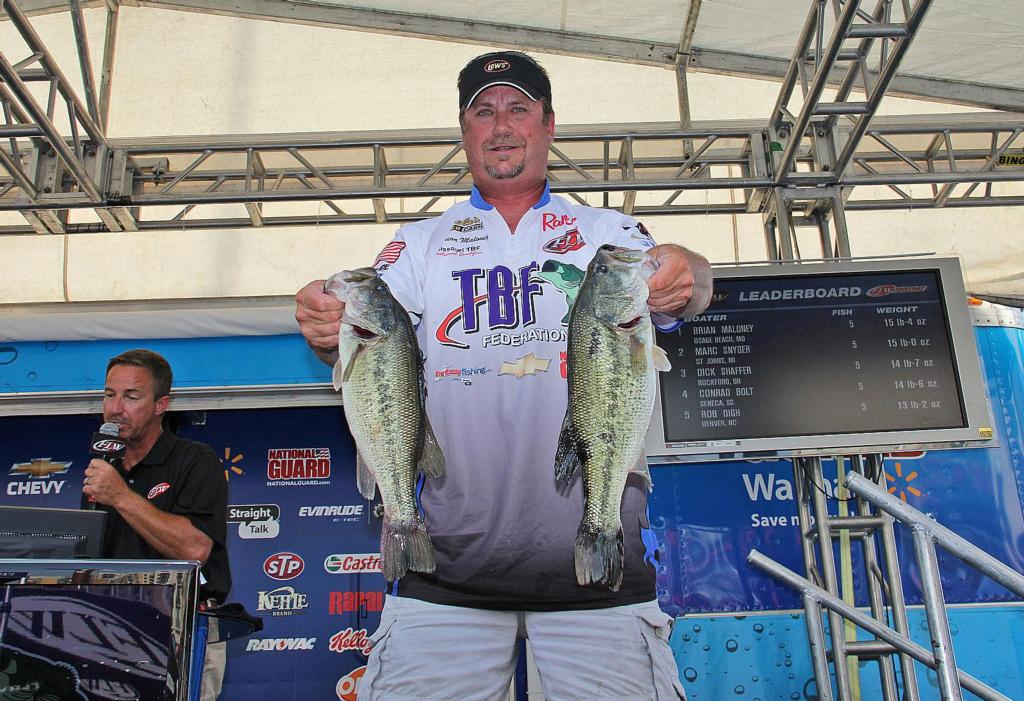 Boater Brian Maloney leveraged the outgoing tide to take the day-one lead at the BFL All-American. Photo by David A. Brown.
May 17, 2012 • David A. Brown • Phoenix Bass Fishing League

NATIONAL HARBOR, Md. – Tidal bass fisheries typically confound, confuse and frustrate those unaccustomed to the water’s daily rise and fall. Not so for Missouri boater Brian Maloney who claimed the top spot on day one of the Wal-Mart BFL All-American on the Potomac River.

With the morning high tide peaking about an hour before the 8 a.m. launch, anglers fished outgoing water all morning, slogged through slack water in the early afternoon and then found the water rising with an incoming tide for the rest of their fishing day. While many struggled with the concept of falling water pulling their fish away from shoreline cover, Maloney leveraged this movement and sacked up a limit of 15 pounds, 4 ounces to take the top spot by a narrow margin of just 4 ounces.

“I got on a low-tide bite pretty (early), went through some fish fairly quickly and it took us until about 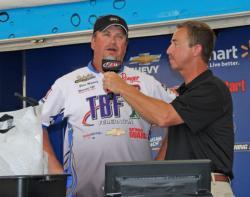 noon to get our limits,” Maloney said. “It seems like the fish are moving and I know where they’re going to. I’m waiting for them and they’re coming to me. I’m going to play that game all week.”

Maloney said he’s targeting ditches and troughs adjacent to shallow cover. As receding water lays shallow spots barren, the fish drop into these deeper spots. This pattern, he said, held consistent prior to the event and he’s confident it’s one that can carry him to the final round.

Avoiding the stress of a narrowing playing field was simply a matter of recognizing the inherent opportunity of concentrated fish, the leader said. 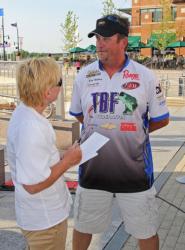 “I didn’t get too panicked about it being (an outgoing tide) most of the day,” he said. “Everybody talks about how great the high tide is, but you have to fish the fish, so that’s what we did.”

Malone said he caught four of his keepers during the outgoing tide and added one more during the afternoon’s incoming cycle. He caught all of his fish on shaky heads.

“There’s nothing fancy about that – everyone’s doing it,” Malone said. “There’s no secret to (the technique), I just think we found a spot that the fish are coming to.”

Bottom composition determined Maloney’s shaky head choice. Over rocks and other bottom structure, he’d go with a 3/16-ounce head so he could best traverse the relief. With flatter mud bottom dotted with clams, he’d fish a ¼-ounce head. He varied his worm colors with a selection that remained classified. 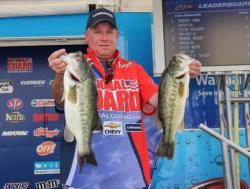 pound limit that put him in second place. He caught two of his keepers by sight fishing beds in shallow water.

Snyder said that despite his big fish, the morning’s outgoing tide proved mostly unproductive for him. Once the water turned and started its afternoon rise, his bite improved.

“I only caught five today – it was pretty slow,” he said.

Fishing Robo Worms on split shot rigs and centipedes on a Carolina rig delivered his catches. Fishing gravel bottom was the key for Snyder. He said he found a couple of key spots and just milked them most of the day. 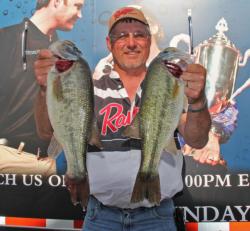 Rockford, Ohio boater Dick Shaffer caught a limit of 14-7 and took third place on day one. A dominant pattern eluded him, but persistence paid off with a strong start.

“I just fished a bunch of different places and caught fish pretty much all day,” he said. “I didn’t really have anything special – I just junk fished.”

Shaffer said he caught fish on Senkos, jigs, tubes and crankbaits. He was looking for a specific type of habitat that he did not wish to reveal. He did note that tide height played an important role on some of his spots.

“There was one specific type of (habitat) and when I got around the right stuff, I caught them,” he said. “The outgoing and the incoming was about the same, I believe, but at some of the spots, I had to wait until the water got high enough to fish.”

Conrad Bolt, of Seneca, S.C. said he found that the prespawn fish he had located during pre-practice 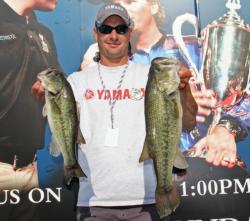 were spawned-out and settling into their post-spawn areas. After catching a quick limit today, he ran a lot of new water and located fish throughout his search. Five good ones gave him the fourth-place total of 14-6.

Bolt said he caught his fish on shaky heads, swimbaits and spinnerbaits. Day one yielded about a dozen keepers.

Denver, N.C. boater Rob Digh placed fifth on day one with a limit catch of 13-2. 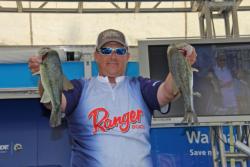 Akin grinds it out for co-angler lead

Jake Akin of Powder Springs enjoyed plenty of action during the first half of his day, but keepers were few and far between. When his boater made a key change later in the day, he quickly filled up a limit with quality fish that gave him the day-one lead with 14 pounds, 3 ounces.

“We fished a spot my boater found in practice and then we made a game change,” he said. “We 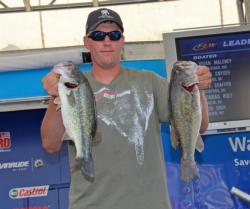 changed the area and what we were fishing. We rolled up and I caught a 3-pounder. A few minutes later, I caught a 4-pounder.”

Akin said he and his boater started fishing shallow rocks with current breaking around them. Later, they moved to a marina where they caught fish in deeper water.

The top co-angler caught most of his fish on shaky heads with black or Junebug worms around rock. Losing a big fish early rattled his mental game, but he regrouped and put together a strong opening performance.

Second-place co-angler Robert Hime, of Odessa, Mo. trails the lead by a little over a pound with his 13-2. His day-one success hinged on downsizing his tackle and making slow presentations with shaky heads and light Carolina rigs. 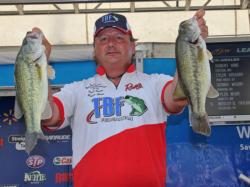