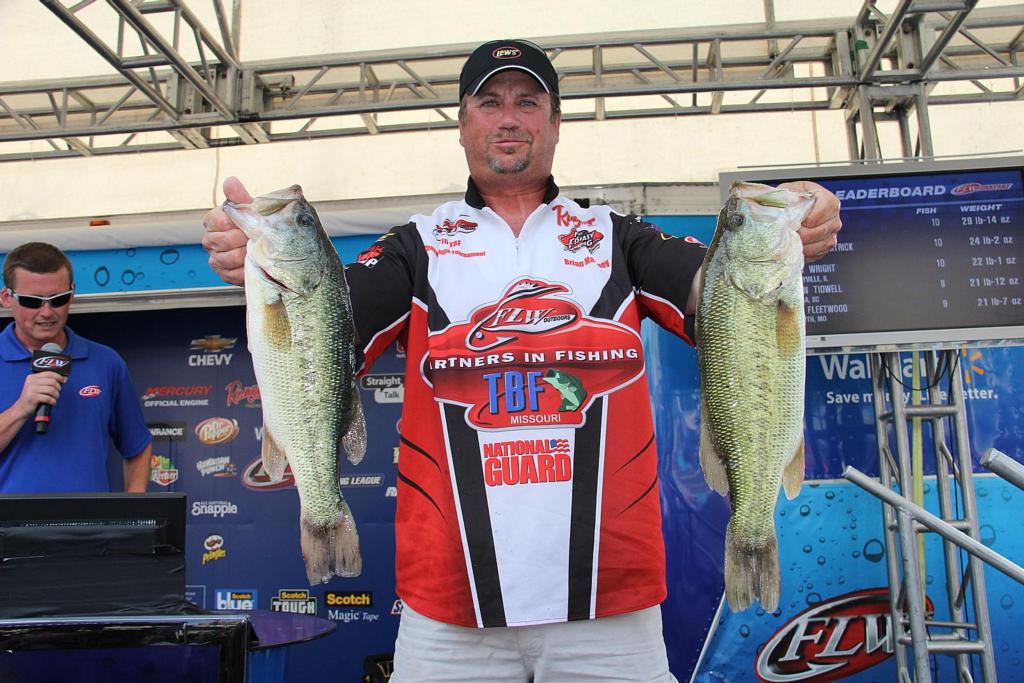 Sticking with his outgoing tide pattern kept Brian Maloney on top at the BFL All-American. Photo by David A. Brown.
May 18, 2012 • David A. Brown • Phoenix Bass Fishing League

NATIONAL HARBOR, Md. – Brian Maloney learned that ditching his ditch was not a wise switch. Fortunately, the Missouri boater got back to his original plan in time to sack up a nice limit and retain his lead in the Wal-Mart BFL All-American on the Potomac River.

On day one, Maloney targeted the deep furrows that storm drains had cut through shallow flats. With an outgoing tide lasting all morning and slacking out around 1 p.m., his chosen habitat presented an ideal scenario, as a steady stream of fish dropped off the flats and into these deeper lanes. With tides running a little under an hour later each day, Maloney enjoyed a longer period of falling water for day two.

Fundamentally, today’s later tide schedule allowed him a little flexibility to explore other options and 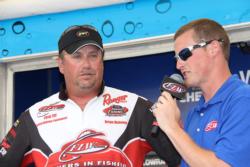 still have sufficient time to work his primary pattern. As it turned out, Maloney found the staying put would’ve been the best decision, but fortunately, a side venture didn’t cost him the lead he established on day one. Adding 14-10 to his first-day’s score of 15-4 gave him a two-day total of 29-14. Notably, Maloney’s day-one margin was just 4 ounces, but today he opened that lead to a pound.

“This morning, we pulled up and right away my co-angler got into a good one so I knew they were there,” he said. “Around 9:30, it slowed down for some reason so we left and tried something real quick. I knew that was the wrong move so I went straight back to those fish and within 15 minutes we started culling fish.

“I realized this is a three-day event so we got back off of them and guarded the area. I had boats around me that were trying to come in, so we just waited there and about an hour before weigh-ins, we decided to idle on in.” 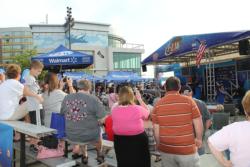 Maloney said the fish he’s catching are mostly post-spawners. In a few weeks, a lot of these fish will weigh more than they do now, but he’s happy to have his weight.

“The fish are beaten up (from spawning) and they’re healing,” he said. “They have no bellies on them so they should weigh a lot more, but I’ll take them.”

Maloney caught his fish mostly on shaky heads but he also mixed in a little cranking with chartreuse balsa wood bait.

A late flight may have prevented Rockford, Ohio boater Dick Shaffer from doing everything he wanted to 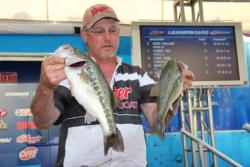 do, but you wouldn’t know that from his performance. Matching his day-one score of 14-7 gave Shaffer a total of 28-14 and moved him up a notch to second place.

“I did pretty much the same as I did yesterday, but I stopped before I got to where I fished yesterday because I was the last boat out,” Shaffer said. “I stopped at another spot and caught a pretty nice one there.”

Shaffer targeted hard cover and fished from the shoreline out to 20 feet of water. He fished some in marinas and even spent some time probing bridge pilings. Bait diversity was also important. He caught fish on a jig, shaky head, tube and Senko. 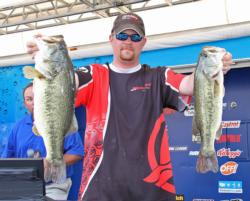 Christopher Jones, of Bokoshee, Ok. locked up his final-round berth by improving f.rom eighth place to third on day two. He did that by catching the heaviest stringer of the tournament – 15-11 – and tallying a two-day total of 28-5.

Jones caught said he’s fishing a community hole with rock and wood. He pulled a 5-pounder out of the area and his co-angler also weighed a good sack.

“We caught some deep and we caught some by flipping in the high tide,” Jones said. “It’s just running the tide – it’s just a timing thing. When the tide’s high, they move onto the wood and when it’s low, you have to pull out with it onto the rocks.”

Jones caught his fish on finesse rigs – mostly shaky heads and Senkos. As he pointed out, the heavily-pressured area demanded diligence.

“We never got it going today – it was just one here, one there,” Jones said. “There’s a lull period from about 11 to one when that tide’s low. There’s no incoming or outgoing water. You almost can’t get a 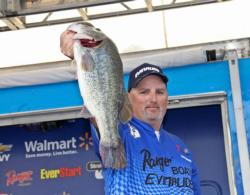 Scott Hamrick, of Denver, N.C. also improved his position on day two by moving up from 10th place to fourth on the strength of his 15-pound, 6-ounce sack. Even though he missed his limit by one fish, Hamrick’s day-two catch was still the event’s second heaviest. Hamrick’s day-two catch included a 5-pound, 14-ounce lunker that helped move his total to 27-11.

Hamrick caught all of his fish by flipping rocks and wood with a Shooter jig. His day, he said, got off to a great start, but the action quickly fizzled.

“The two biggest ones, I caught in the first seven minutes today,” Hamrick said. “I caught three in the first 10 minutes and then it was pretty slow the rest of the day. I got one more good bite later in the day.” 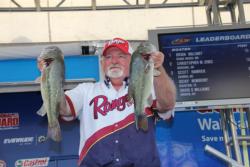 Dicky Newberry, of Houston, Texas also missed his day-two limit by one, but he caught four good fish that weighed 14-11. His second-round weight gave him a total of 27-4 and moved him up from ninth place to fifth. Newberry said that flipping docks – a pattern he identified at the end of day one – kept him occupied most of today.

“I made a change yesterday evening; I stumbled upon a little pattern and I have a big area to myself,” he said.

Akin grinds it out for co-angler lead

On day one, Jake Akin of Powder Springs reported a tough, monotonous course to his co-angler lead. 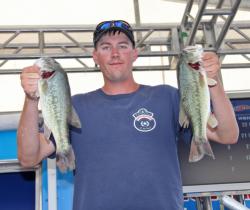 Today, he got off to a quick start, but his limit catch of 10-9 fostered little confidence in holding that position. Nevertheless, he ended the day in the No. 1 position with 24-12.

“I stuck with the shaky head today and it was just grinding,” he said. “I had a limit in the first hour, but it was just five scrawny keepers.”

Dragging the shaky head with a black worm across pea gravel banks near deep water was the best tactic for Akin.

“It was just as basic as it can be,” he said. “If I came across a little piece of brush that my boater missed, I’d jack a fish, throw back and jack another one.”

Brandon Booher, of Bristol, Tenn. took second place with 23-15, while James Waller, of Cypress, Texas was third with 22-0. In fourth place, Robert Cox, of Tippecanoe, Ohio had 19-8. Aaron Arning, of Walnut Hill, Ill. placed fifth with 19-2. 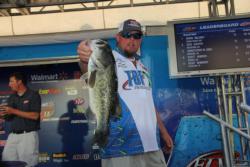