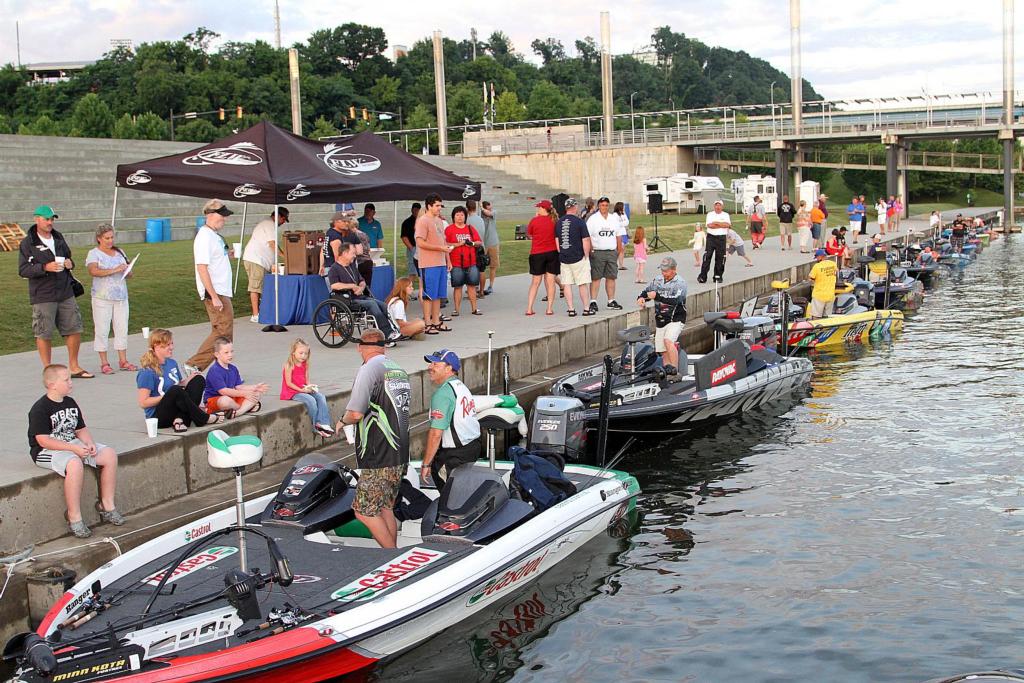 BFL All-American finalists chat with family and friends prior to the final takeoff. Photo by David A. Brown.
June 29, 2013 • David A. Brown • Phoenix Bass Fishing League

CHATTANOOGA, Tenn. – The buoys in front of Ross’ Landing were leaning a little more and chase boats drifted a little faster while awaiting the final takeoff for the Walmart BFL All-American on Nickajack Lake. These indications of strong current flow should bode well for the top 10 boaters and co-anglers seeking their limits of Tennessee River bass.

Current does two good things for bass fishermen: It stimulates feeding and positions fish in predictable locations. Bass like to use rocks, logs and other bottom features to ambush passing 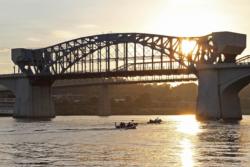 In the boater division, Chris Wilkinson, of Farmersburg, Ind., has led the field for the past two days. His primary baits have been a Hawgback Lures tube and an 11 1/2-inch ribbontail worm from Bauer Custom Baits. Wilkinson said the worm has been his top producer around the laydowns and logs he’s fishing. The worm’s custom color – green pumpkin blue fleck – has proven essential to his success.

“If you get up close to the stuff I’m fishing, you’ll notice there’s some real little (baitfish) fry,” Wilkinson said. “With that blue fleck, I think that when that worm goes by them, they see that blue fleck and they think it’s a ball of fry and they’re eating it.” 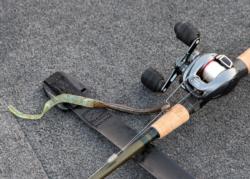 Wilkinson also had a couple of topwaters on his deck this morning. Under the cloudy skies of day one, he nabbed a couple of limit fish early on surface baits. Day two brought mostly sunny conditions, so the topwater game went away, but with a mix of clouds and sun on tap for day three, he’ll look for occasional topside opportunities.

At the morning takeoff, the majority of boats headed downriver, but Wilkinson headed upriver toward the Chickamauga dam, as did second-place boater Kerry Milner who has found his fish along current seams in the tailrace. 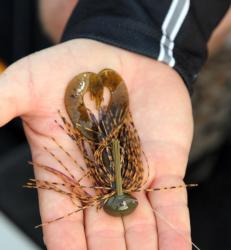 direction the fish are facing,” Milner said. “The strong current is obviously coming from upstream, but it’s making eddies and back currents. A lot of times, I’m fishing right beside that current going downstream but I’m actually pulling my baits in the direction of an eddy, in that secondary current.”

“I think this area is going to keep replenishing, so I’m just going to grind it out and hope for five big bites.”

Starting in third-place, local favorite Corey Bradley is hoping to have another fast start like he enjoyed on day two. The difference, he said, will be an all-out maximization effort. 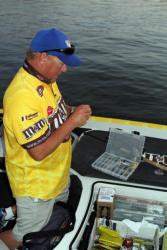 On day two Bradley found himself looking at a good limit before 8 a.m., so he backed off his fish to save the potential for today’s final round. Bradley has been catching his fish by stroking ¾- and 1-ounce Choo Choo Lures football head jigs with NetBait Paca Chunk trailers in about 20 feet.

Fourth-place boater Shawn Gordon started days one and two by cranking a Bomber Fat Free Shad to catch his limit and then flipping a jig with a curly tail grub trailer to upgrade. Yesterday, however, the jig produced all of weight fish, so he’ll devote his entire final day to this pursuit.

David G. Williams starts in fifth place in the boater division and he said he’ll be running new water 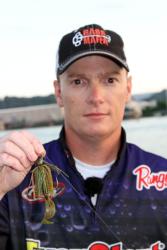 again as he did yesterday. Williams said the good thing about a river system is that he can just run the likely banks and look for the type of cover and depth where he likes to throw Rico poppers, Shooter Jigs and Texas-rigged Zoom Brush Hog and Speed Craws.

Leading the co-angler division, Nick Angiulo will fish a dropshot baited with a Bitters Mini Wand in watermelon candy. He said that the finesse rig’s lighter presentation should give him the right contrast to the larger baits his boater, Wilkinson, will be throwing.

Today’s final weigh-ins will be at the Walmart located at 3034 Rhea County Highway in Dayton, Tenn., beginning at 5:30 p.m. 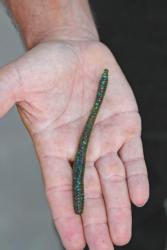 Fans will be treated to the FLW Outdoors Expo at the Walmart in Dayton on Saturday from noon to 4 p.m. which includes Ranger boat simulators, the opportunity to interact with professional anglers, enjoy interactive games, activities and giveaways provided by sponsors, and fans can learn more about the sport of fishing and other outdoor activities. All activities are free and open to the public.

Coverage of the BFL All-American will be broadcast in high-definition (HD) on NBC Sports Network when “FLW” airs Aug. 18 from 3:30-4:30 p.m. ET. The Emmy-nominated “FLW” television show is hosted by Jason Harper and is broadcast to more than 564 million households worldwide, making it the most widely distributed weekly outdoors-sports television show in the world. 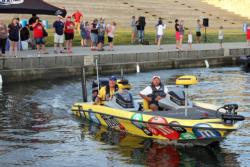