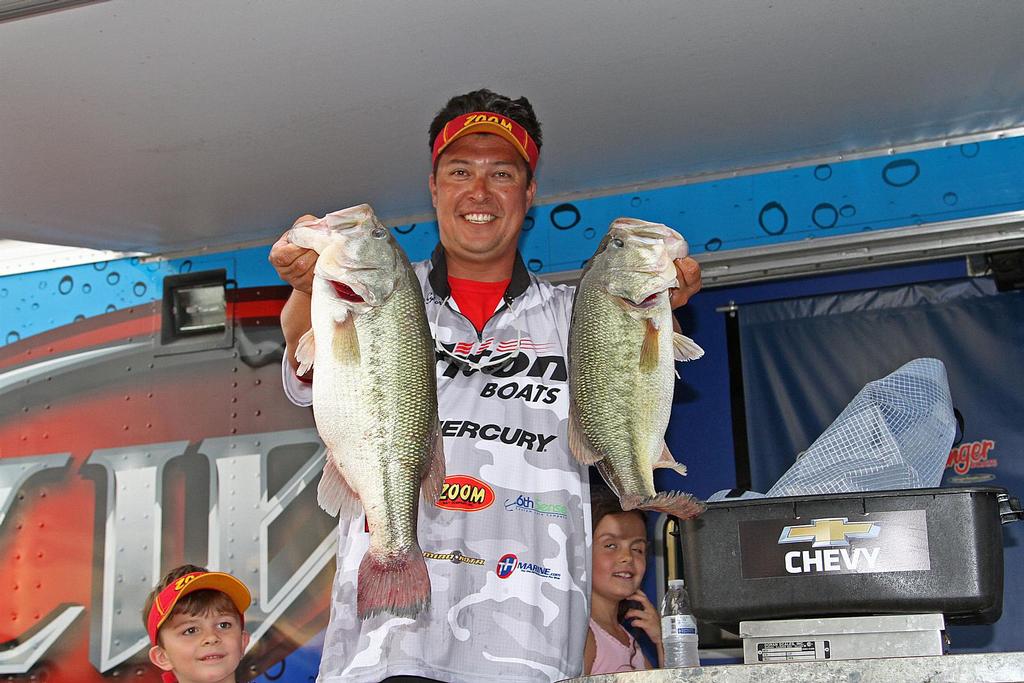 FLORENCE, Ala. – Marcus Sykora of Osage Beach, Mo., got off to a blistering start on day one of the Walmart BFL All-American on Wilson Lake with a five-bass limit of 26 pounds, 11 ounces that leads the boater division by a margin of 5-6.

Targeting ledges in the mid-lake area, Sykora said he found his fish relating to a V-shaped notch on the side of a point in about 15 feet of water. He had his weight by about 9 a.m. and was pleasantly surprised by what he found on the two waypoints he fished today.

Sykora said he caught his fish on a jig and a crankbait. The former was his primary bait, but he used 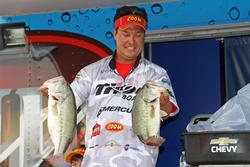 the latter to squeeze out a few final fish before departing.

“These fish were fresh,” Sykora said. “There were actually two schools that had moved in, and one of them had been there for a little while, and some of them were brand new. You could tell, because they looked postspawn, and some were filled out already.

“I threw the crankbait in there first, and then I’d pick up a couple of stragglers with a jig, and it just all worked out,” he adds.

So frantic was that morning action that Sykora recalls a moment where he had three fish in the net at one time. 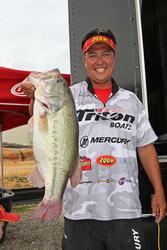 “My co-angler netted a 5-pounder for me, and then he had a double and I netted his fish for him,” Sykora said. “He had a 4-pounder and a 3-pound smallmouth on [the same crankbait], so we needed three in one scoop.”

Jumping out to a huge day-one lead gives Sykora more than a numerical advantage for day two – it also allows him more flexibility.

“I think it’s going to give me a little bit of comfort level,” he said. “The key to these events is to be able to just go fishing. Having a lead gives me the confidence to know that I don’t have to make up that margin.”

Looking ahead to the next round of competition, Sykora said he feels good about the prospect of another productive day on the same spots.

“I left my fish early today and nobody was around, so hopefully there’s plenty there [for day two],” he said. 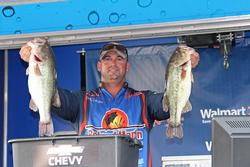 whole different world” compared to his weedy home waters. Nevertheless, he adapted and brought in a limit weighing 21-5.

“It was mostly ledge fishing today,” Feller said. “My co-angler was fortunate enough to catch a 4-pounder on a dock, but everything else I caught was ledge fishing.”

Feller reports catching fish in the morning and afternoon, but struggling during a slow midday period. He caught his fish on a crankbait and a football head jig.

“Generally after I would not get bit after about 20 minutes, I’d switch to a jig and get a bite,” Feller said. “After that would die down, I’d switch back over to a crankbait.”

Feller said his day spanned the length of Wilson Lake, as he fished dam-to-dam and hit about 6 spots. 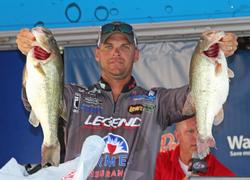 The day started well for third-place boater Todd Castledine, of Nacogdoches, Texas, but it was a big finish that put him in third place with 20-8

“I had a good morning bite and then at the very end of the day, I caught a couple of key fish,” Castledine said. “I literally caught a 4 1/2-pounder with 20 minutes left and then I caught a 3-pounder on my last cast.”

Targeting ledges, Castledine caught his fish on a crankbait, a jig and a Carolina rig.

Ledge fishing was also the game plan for David Nichol, of Gainesville, Ga., but his was a different 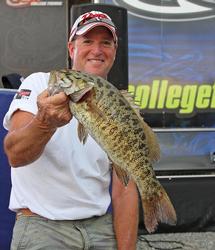 approach than most of his competitors. While many relied on crankbaits and jigs, Nichol employed an unnamed finesse bait.

The result was a mixed bag of smallmouth and largemouth bass. His first-round total of 19-12 landed him in fourth place. 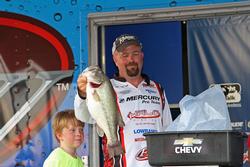 FLW Tour pro George Kapiton surmised that his chances of qualifying for the Forrest Wood Cup were batter in the All-American than the Tour event also running this week on Pickwick Lake. It seems he made the right call, because the boater from Inverness, Fla. sits in fifth place with 19-5.

Kapiton got off to a quick start by catching a limit of bass on a Zara Spook fished over an offshore hump. After the topwater bite subsided, he upgraded a couple of times with a Medlock football jig and added a 6-pounder on a Strike King 6XD crankbait.

“That topwater bite is what did it for me,” Kapiton said. “I’m glad I went with my gut on that one. If we get the same conditions tomorrow, I should be able to catch 15-18 pounds again. There’s a lot of fish there.”

Maynard cranks his way to top of co-angler field

Co-angler leader Brandon Maynard, of Cookeville, Tn. enjoyed a strong start to a day that rewarded 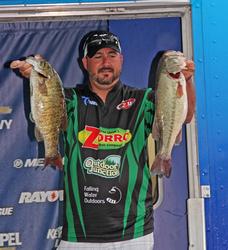 him with a limit weighing 21-3. Fishing areas with abundant forage, he said, was the key to his success.

“We started out this morning with the 6XD and I had a good sack in the first 30 minutes,” Maynard said. “I culled one more time up in the day, but it got pretty slow after lunch.

“The morning bite was really good. I think it was the current coming from (adjacent) Lake Wheeler; it had the shad pushed up there and the big fish moved up in there. We were marking a lot of bait on the bottom.”

Maynard found the sexy chartreuse color most productive for him. He also caught fish on a Carolina rig, but none were of the quality he caught on the crankbait.