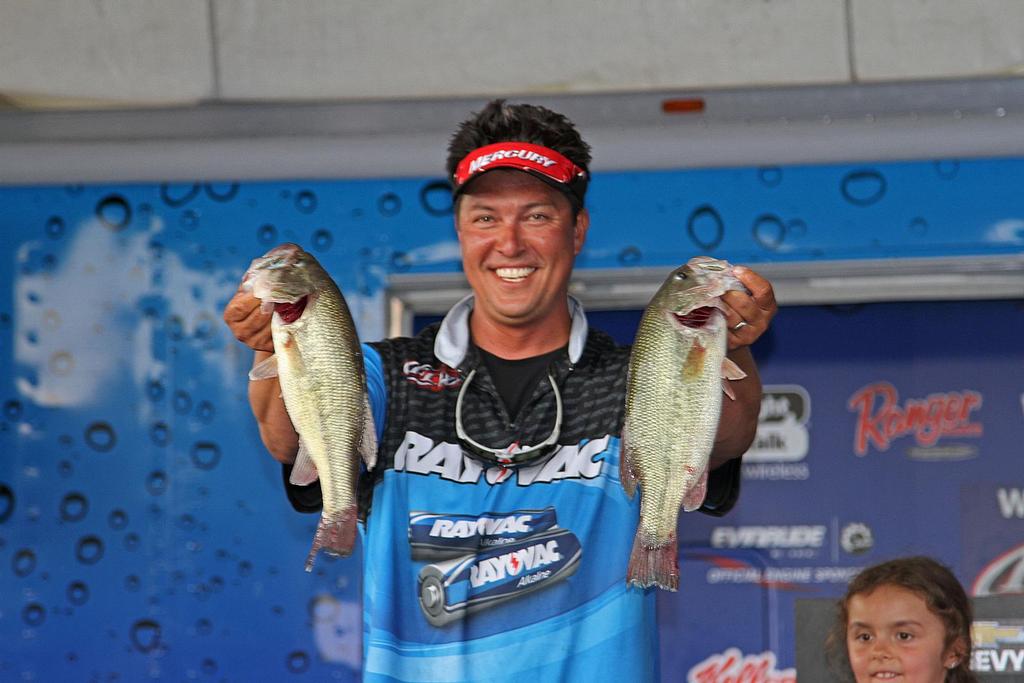 FLORENCE, Ala. – Current positions bass – everyone knows that. Just where today’s Wilson Lake current positioned the massive school of bass he fished on days one and two – Marcus Sykora does not know that. What he does know: the 53 pounds, 15 ounces he tallied those first two days positioned him for a wire-to-wire victory in the Walmart BFL All-American.

With trophy in hand and a berth in the Forrest Wood Cup, August 14-17 on South Carolina’s Lake Murray, Sykora exclaimed: “It feels awesome.”

However, prior to the weigh-ins, the boater from Osage Beach, Mo. was concerned that after leading the field for two days, he might have let victory slip through his grasp.

Here’s the picture: Day one, Sykora weighed in 26 pounds, 11 ounces. A day later, he followed with 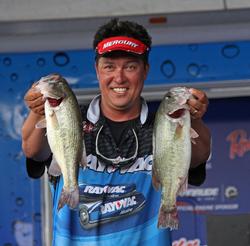 Going in to the final round, Sykora carried a 14-pound, 6-ounce lead and many assumed he’d run away with the victory. Fate, however, had other plans.

Despite fishing the same general area and throwing the same basic lure selection, Sykora managed just 12-5 on day three. Fortunately, the significant lead he had amassed provided enough of a cushion to absorb that day-three disappointment and Sykora ended up with a tournament total of 66-4 and a winning margin of 4-8.

“You never know what to expect,” Sykora said. “The first day, I had all those fish in the first hour of fishing. The second day, I stayed there about an hour and a half. But then, what happened today, my school was completely gone.” 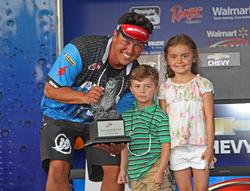 All three days, Sykora’s primary spot was a long bar extending from the south wall of the Wheeler Dam lock. Current from the dam’s water release schedule would break around this bar and stimulate the bass that were holding along its edges.

Sykora surmises that increased current on day three pushed the fish off the bar and scattered them into parts unknown. Today, he spent the first couple of hours of his day looking for fish around an offshore hump south of the bar on which he did his damage the first two days. After letting his bar rest for a bit, he returned to the main spot and caught his final limit there.

For the first two days, Sykora threw primarily a deep diving crankbait. The moving bait picked up a couple of day-three keepers with a Chompers jig and a Zoom Old Monster worm.

“It’s the Tennessee River – a crankbait a jig and a worm,” Sykora said. “What else do you need?”

FLW Tour pro Jayme Rampey, of Liberty, S.C., took a chance that nearly paid off in a big way. Unlikely 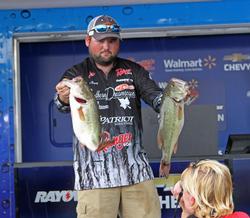 to qualify for the Forrest Wood Cup through the Tour’s points standings, Rampey opted to forego the Tour event on nearby Lake Pickwick and instead devote his efforts to the All-American.

Rampey caught most of his fish cranking ledges, but he discovered an important tactical point on day two that greatly impacted his performance.

“There was one key that everybody was missing and when I figured that out it was instant (success),” he said. “It was boat positioning. Everybody was fishing these places out deep, throwing up shallow. I got up shallow in 2-3 feet of water, put my Power Poles down and threw out to that deeper water.

“As soon as my bait would clear the ledge, they would crush it. I figured that out on one of those random casts where you throw out into the middle to (clear) a backlash and I caught a 6-pounder. I figured it out from there.” 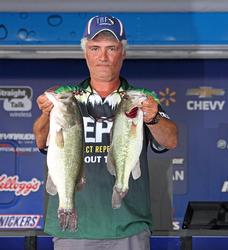 Dino Moutogiannis, of Newington, Ct. joined Sykora and Rampey as the only boaters to break 20 pounds twice in the All-American. On day one, he placed eighth with 17-15, but rose to second on day two by adding 21-10. In the final round, his 21-15 gave him a three-day total of 61-8 for a third-place finish.

All three days, Moutogiannis caught his fish on Carolina rigs, football jigs and crankbaits. He fished ledges and found his best action over areas with shell beds.

Todd Castledine was probably the most pleasantly surprised angler in the top-10. The boater from 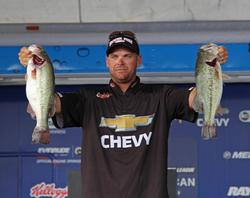 Nacogdoches, Texas said he started day three without a solid game plan on where he’d find his fish. As he explained, Castledine just went fishing and ended up finding enough for a respectable performance.

“I only got two days of practice in before the cutoff and I think I caught three fish over three pounds,” Castledine said. “I think that was my worst practice ever.”

Despite being less prepared than he would have liked, Castledine hovered in the top-5 throughout the event. He placed third on day one with 20-8, slipped to fifth on day two with 16-3 and rose to a fourth-place finish on day three after catching 18-4 and totaling 54-15. 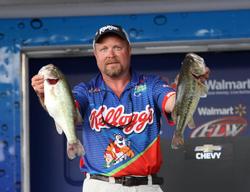 Edwards caught all of his big fish on a Strike King 10XD deep diving plug. A Texas-rigged Zoom Old Monster worm produced the rest of his fish. 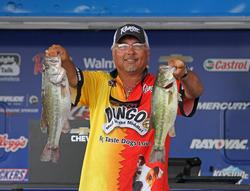