Top 10 Patterns From The All-American

How the best got it done on the ledges 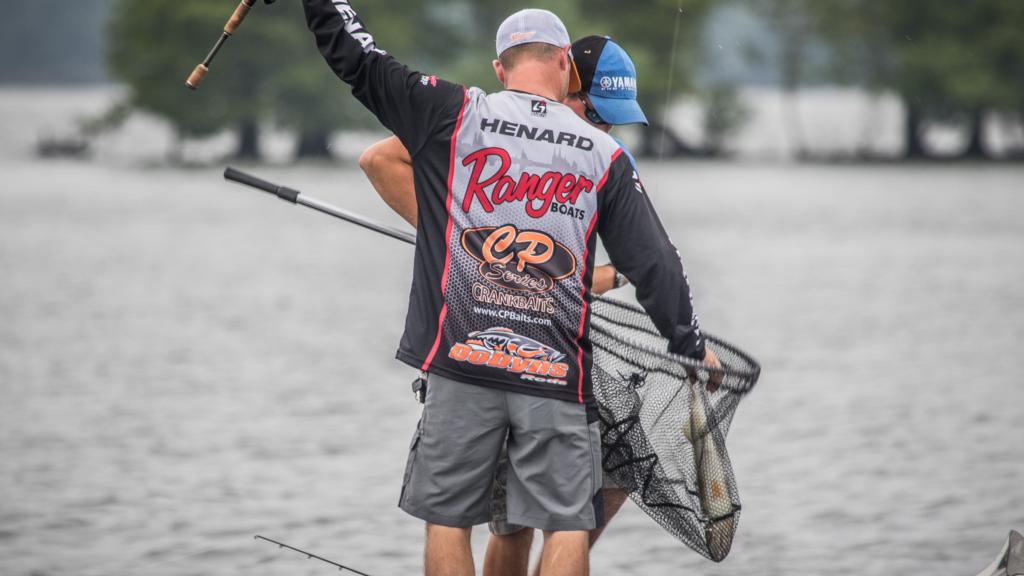 While many of the 49 boaters fishing the Walmart Bass Fishing League All-American hosted by the Henry County Alliance on Kentucky Lake fished anywhere from just below the Highway 79 bridge at Paris Landing north to the dam, eventual winner Curtis Richardson opted to fish about 20 miles south of there.

Who can argue with success? The contrary Canadian won the boater division by more than 3 pounds over his closest competitor, Jeremy Lawyer of Missouri. The 31-year-old Ontario angler did it largely with Nichols Lures Magnum Spoons that he fished on bars, ledges and shell beds in the vicinity of New Johnsonville, Tenn. On the last day, Richardson relied on a drop-shot rig with a Zoom Magnum Trick Worm rigged wacky style to bulk up his limit.

Giant spoons and drop-shot rigs were out in force during the All-American, as it strictly was a ledge tournament, but they weren’t the only tools that the All-American anglers worked with in the three-day event. 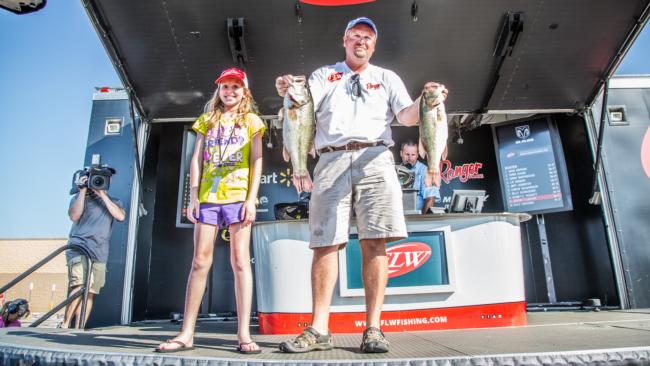 Lawyer, the city superintendent of Sarcoxie, Mo., came from the BFL’s ever-strong Ozark Division and his game plan revolved around time management. Each day he would spend several minutes cruising around potential fishing spots to check the presence and disposition of fish. If he liked what he saw, he would stop and make a few casts; otherwise, he moved on to the next spot.

Lawyer says he averaged about 40 waypoints each day in the first two rounds, but tightened his focus on day three and only checked the places where he caught fish previously.

“I stayed on some better stuff where there were kickouts and bars along the main river channel,” reveals Lawyer. “There was one shell bed in the mouth of a bay above the bridge that was really productive first thing. Then it kind of slowed down.”

Lawyer’s main bait was a homemade 1-ounce bucktail jig with a shad-colored Castaic Jerky J trailer. He would cast it out, give the reel handle a few turns, then let the jig settle again before repeating. Most of the strikes he got, remembers Lawyer, came on the fall.

“I caught eight keepers and never lost a good fish,” says the Missouri angler. “He [Curtis Richardson] beat me; I didn’t beat myself.” 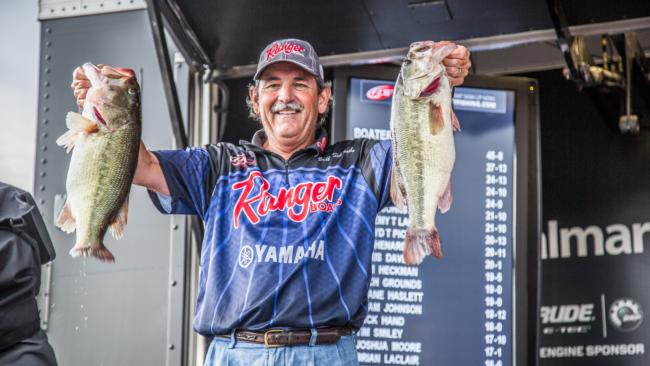 If there was a sentimental favorite in the 2015 All-American, it was Schroeder. He fished in the first All-American in 1983 and it, too, was held on Kentucky Lake. For a time, it looked as if Schroeder might accomplish it, but Saturday’s fishing was vastly different from the previous two days and his best spots wouldn’t produce.

“With 15 minutes to fish, I culled three of my keepers, but not by much,” says Schroeder. “I had fish under my boat all day, and I kept backing off and thinking that I could catch them, but they just didn’t want anything I had.”

Schroeder boated his best fish, a 5-pounder, when he popped his homemade 3/8-ounce football jig loose from a brushpile and it hit. His other four keepers came on the ubiquitous Nichols Lures Magnum Spoon.

“The fish were tighter to brush and stumps today where I was fishing,” notes Schroeder. “That storm that came through [Friday evening into the night] might have changed something. I had four squeakers out of the places below the bridge where there’s no telling how many keepers I caught the first two days. Maybe I should have left there sooner and checked some new spots. I don’t know – I gave it the best I had.” 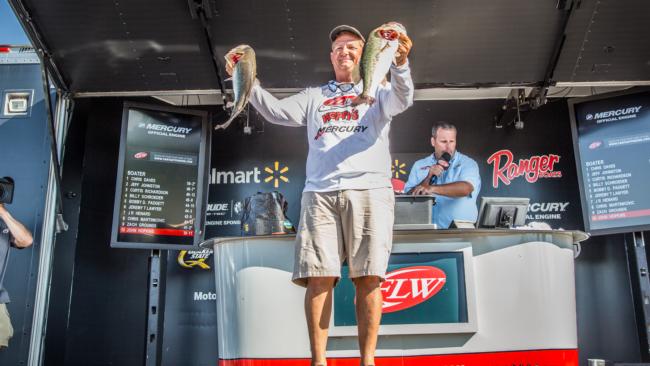 Hopkins, of Hendersonville, Tenn., might have wondered about what might have been had he not had a slow start in the All-American. He weighed 16-1 for 18th place in the opening round, but then found his groove on day two and showed up with 23-10, good for seventh place. His limit in the championship round totaled 21-5 – the best sack of the day among the boaters.

A Music City Division qualifier, Hopkins located a ledge a few miles up the Big Sandy River whose current flow was more consistent than that in the main lake. The ledge had the usual mix of mussel shell beds and stumps, and bass replenished on it every day.

Hopkins fished it in the first round, but had trouble boating a couple of better fish. On day two, his limit included a bass that weighed 8-10. Then, with non-boater champion Bob Burgess sharing the boat with him, Hopkins returned to the Big Sandy for another solid limit.

“I didn’t catch as many fish today as I did Friday, but the ones I caught were good keepers. I culled twice,” Hopkins recalls. “The current did slow down some, but we got up on top of the ledge and would just cast, reel and drag. When they hit it, they’d near about take the rod out of your hand.” 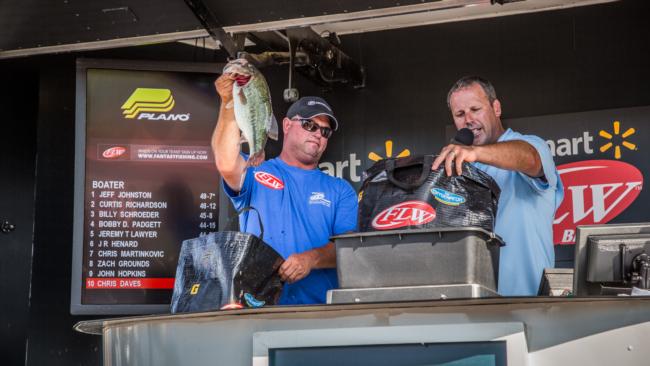 Daves of the Shenandoah Division was 10th in the standings on day one, eighth on day two and finally fifth, indicating he was sorting things out as the tournament progressed. In fact, Daves says he caught between 35 and 40 keepers the last day when everybody else was struggling to catch a limit.

“I fished about a half-mile above the [Highway 79] bridge where there was a little river bend with a good shell bed on it,” says Daves, son of Bassmaster Classic champion Woo Daves. “There were lots of shad there and lots of 4-pound bass. I was culling by 9:30.”

The Virginia boater’s most productive baits were a bucktail jig on day one, a Zoom Magnum Trick Worm on a 9/16-ounce shaky head on day two and one of the “hubcap” giant spoons in the championship round. 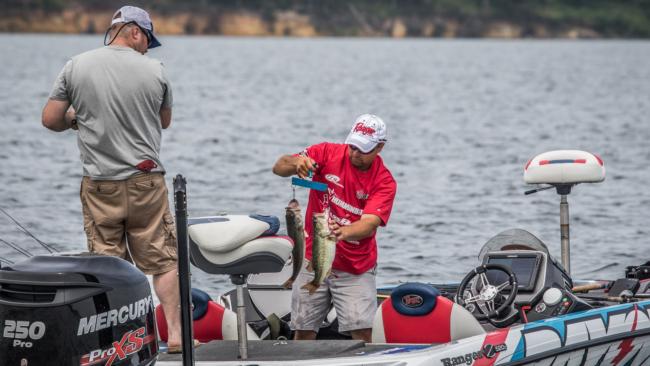 The Ohio angler mainly stayed north of the Highway 79 Bridge at Paris Landing and ran about 20 miles on the last day, when he could only muster four keepers. Like several others, Martinkovic used an oversized bucktail jig for the most part. He would cast up onto the shallow side of a ledge or hump, then retrieve the jig back toward deeper water. Once he cast the jig out and let it sink to the bottom, he would crank the reel handles a few turns, let the jig go to the bottom again, then repeat.

“I had the fifth keeper on a couple of times today [Saturday], but I couldn’t get it in the boat,” says Martinkovic of the Buckeye Division. “There were two tournaments going on with ours today, and locals were on some of my spots when I got there, but that’s fishing. Mainly I just couldn’t get the fish fired up when I needed to.” 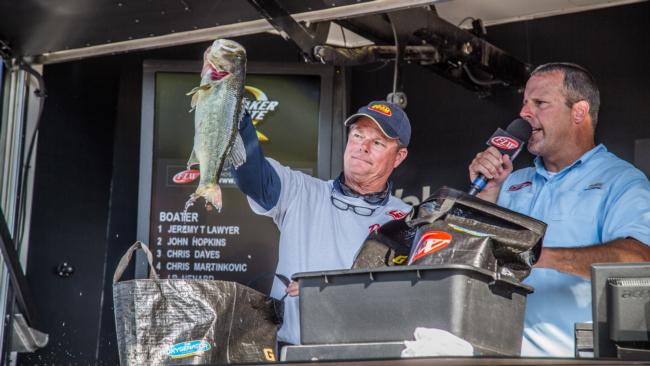 The Georgia veteran set the tempo on day one when he brought in 27-13, the best of 10 sacks that weighed more than 20 pounds in the opening round. Unfortunately, it wasn’t a sign of things to come for anybody, as fishing success gradually diminished for everyone.

Like other tournament leaders, the Bulldog Division fisherman was worried about the inclement weather approaching Kentucky Lake and the effects of high winds and cloudy skies. He had reason to be worried, as it scattered his fish.

“It was a long day on Kentucky Lake,” Padgett said at Saturday’s weigh-in. “I lost them or they disappeared on me and moved. Either way, I couldn’t get on anything solid. I tried everything I knew, but they just didn’t want to eat.”

Earlier in the tournament Padgett used a white Preacher Jig, a Z-Boss25 crankbait and a green pumpkin Zoom Ol’ Monster worm. On the last day, he slowed down and fished a Carolina rig with a Zoom Centipede in smoke blue.

“One thing I did today that I probably shouldn’t have was leave a spot today. I thought I could go catch 17 or 18 pounds somewhere else – wrong,” says Padgett, who had 13-10 on day three. “I found out later that another tournament boat got some pretty good fish there. They just weren’t biting when I was there.” 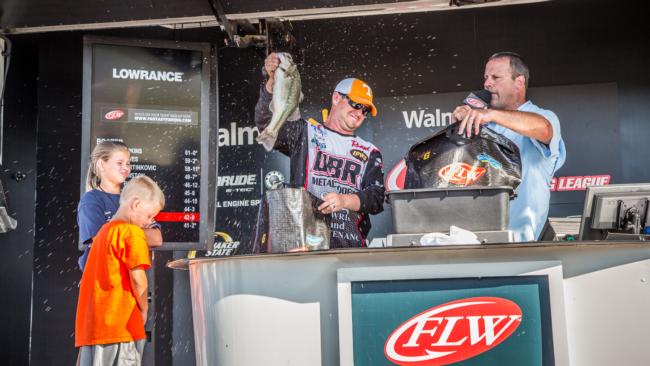 For Henard, it was a tournament of diminishing returns. Where he culled through “25 or 30 keepers” on days one and two, in the championship round he boated seven fish and only four of them went in the livewell. He fished from Danville north to Blood River.

“The current shutting down today [Saturday] really hurt me on the main river ledges I was fishing,” says Henard, who represented the Volunteer Division. “I marked fish, but I never got the feeling I could just turn around and start casting and catch fish. I never went over any that really looked right.”

The eastern Tennessee pro switched up between a ¾-ounce Profound Outdoors Swampers Lures football jig paired with a green pumpkin Yamamoto Swim Senko and 6- and 7-inch Basstrix swimbaits. He qualified for the All-American by winning the Wild Card tournament on Kentucky Lake last fall, but he won it fishing shallow.

“I’m not great at anything, but I’m good at everything,” says Henard of his fishing strengths. “I’ll say that I really like to ride over the fish, see them and then catch them. I plan to get better at doing that.” 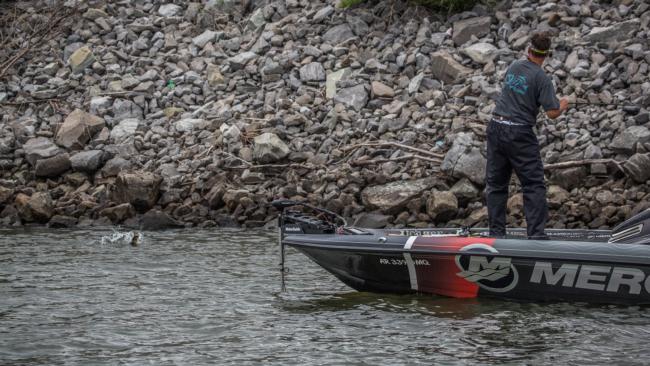 “Who would thought that the 4th and 5th boats out would have waypointed the exact same spot?” Johnston asked rhetorically on opening morning when he and Chris Daves wound up sharing a submerged sandbar. The latter eventually left for greener pastures, but Johnston spent much of his tournament fishing the spot not far south of the Highway 79 Bridge or inside the mouth of the Big Sandy River.

“I didn’t burn a lot of gas this week,” recalls the Mississippi Division angler from Marion, Ark. “I’m grateful for what I caught after the awful practice I had.”

Except for one keeper he landed on day one with a 7-inch junebug Basstrix swimbait, Johnston boated most of his fish on a Zoom Magnum Trick Worm in junebug or green pumpkin rigged on a 5/8-ounce shaky head. He also used a ½-ounce hair jig on some of his deeper spots. The Tennessee pro stirred up some dock talk Saturday morning when he was spotted fishing a SPRO Bronzeye Poppin’ Frog along the riprapped Highway 79 Bridge dike. He caught two keepers on it before heading for deeper water. 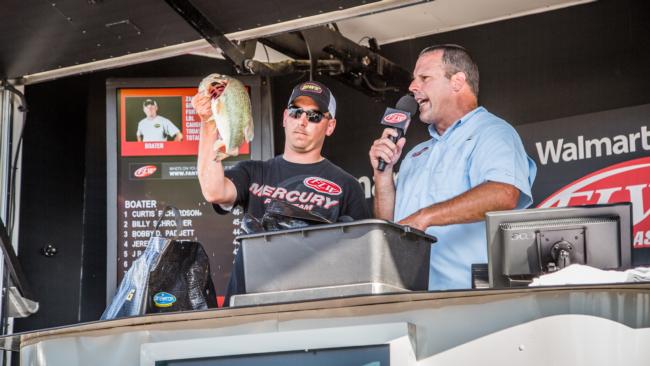 “I ran out of fish,” was Grounds’ terse observation about his championship round when he brought two fish to the scale. He was fishing an area from Blood River to Kenlake State Resort Park on the west side where a channel swings close to the shoreline and employing a ¾-ounce green pumpkin purple Hawgback Lures football jig with a green pumpkin Zoom UltraVibe Speed Craw and a 5/8-ounce Biffle Hardhead with the same Speed Craw. It didn’t help the Hoosier angler’s efforts that the water stained somewhat where he was fishing and the cloudy weather Saturday morning served to disperse the fish.

“I had a few spots in 12 to 16 feet of water, but basically I hammered two spots all week,” says Grounds of the LBL Division. “The first day [Thursday], it was great, then it tapered off some Friday and just played out Saturday. Todd and Troy Hollowell [Walmart FLW Tour pros] really helped me understand what I was looking for, and before the cutoff I spent about 100 hours just scanning – though I’m a shallow-water guy at heart.”