Topwater and Rat-L-Trap key to victory in fall derby 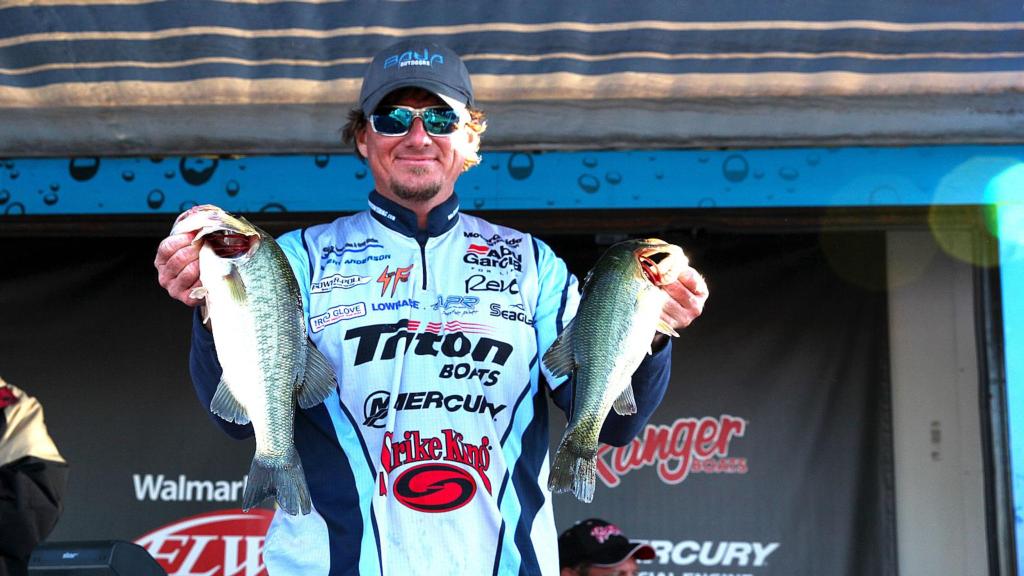 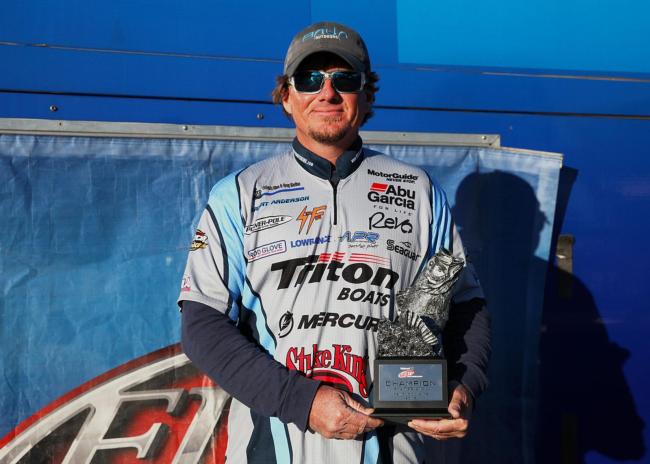 You might say there weren’t any surprises at the 2015 Walmart Bass Fishing League Regional presented by Lowrance on Kentucky Lake Oct. 15-17.

The techniques of the top 12 pros who fished the final day were typical of the Tennessee River in fall: surface fishing with frogs and Zara Spooks and winding Rat-L-Traps and ChatterBaits.

The winners weren’t surprising either: Ryan Sykes of Hamilton, Ohio, won the co-angler division for the second consecutive year, and Tennessee pro Brent Anderson earned his sixth win on the Kentucky/Barkley system since 2009.

In fact, according to Anderson, Kentucky Lake is fishing just about like it does every fall, which fits right into his wheelhouse.

“It’s fall. It’s not easy,” says Anderson, who weighed in 44 pounds, 1 ounce in three days. “I fished all new spots that I found in practice, but they’re on the same pattern I fish every year starting in September.”

Understandably, Anderson didn’t reveal every detail regarding what kind of structure he looks for when fishing his go-to autumn program, but he did divulge a few details. He was targeting schools of main-lake fish in areas about 3 feet deep. On the first day, he was so dialed in on the location of his best schools that he was able to drop his Power-Poles and bomb long casts with a Spook and 65-pound-test braid right to the key area.

Fishing about 25 miles south of takeoff, which took place at Moor’s Resort and Marina, Anderson was culling just 22 minutes after making his first cast. He stayed for an hour but missed the biggest fish that blew up on his topwater. After that, he moved to another school, landed a 6-pounder and culled a couple more times.

Anderson totaled about 30 keepers before heading south into Tennessee waters to hunt a big bite.

“I fished anywhere that I’d caught a big one in the past on a topwater and never got another bite,” he recalls. His total for day one was 17 pounds, which put him in first place. 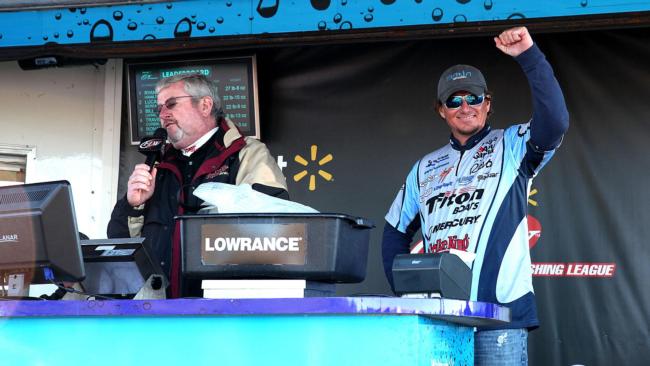 The second day, with the wind picking up out of the north and the air temperature about 20 degrees lower due to a cold front, Anderson returned to his starting spot but never had a bite in the first 20 minutes.

“I raised my Power-Poles and the wind pushed me about 35 yards,” he recalls. “I fired a long cast, made about two twitches with my Spook and a 2 1/2-pounder hit it.”

After another missed bite farther up on the spot, Anderson realized that his school was still in the area but had relocated. He picked up a Rat-L-Trap and started covering water to try and find the fish and draw a reaction bite with a burn-it-then-kill-it retrieve.

It worked. A 3-pounder choked the bait. Anderson spent the rest of the day hunting down his shifting schools and scored a limit that weighed 14-15 to hold the lead goin into the final round.

On day three, with the north wind still blowing, though not as hard, Anderson says he felt like there was a perfect chop for a Zara Spook attack, but the fish were a bit pickier again. He landed one keeper on the Spook and four on the Rat-L-Trap and had only eight keeper bites all day.

“The fish were just never really schooled up,” he says of day three.

A limit of 12-2 was more than enough for Anderson to hold off the competition and take the wire-to-wire victory, earning $20,000 and a new Ranger boat. He credits his win to his knowledge of Kentucky Lake fishing in the fall, and the combination of Power-Poles for boat control and his All Pro Rods (APR) topwater rod, which has earned Anderson about $200,000 in tournament winnings in his career. 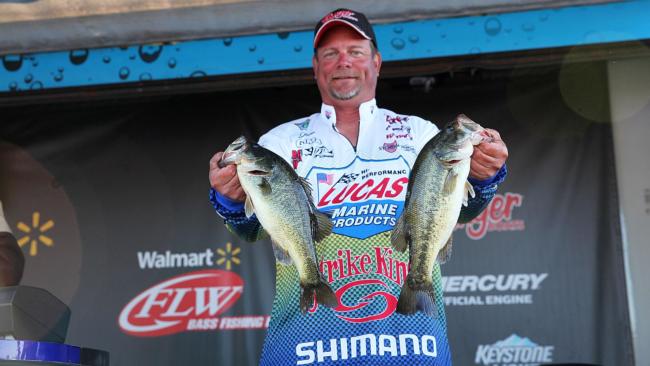 Vitaro Frogs His Way to Second

A 7-pound giant that got away plus a string of lost fish might have cost Jim Vitaro the win, though he’ll never know for sure. Besides, when you’re frogging thick autumn mats, a few lost fish are bound to haunt you. In Vitaro’s case, however, the first day on Kentucky Lake was somewhat of a nightmare.

He’d located about seven key grass spots in Kentucky Lake’s southern waters near New Johnsonville, Tenn. The first day, Vitaro started off throwing a topwater on a bar, or shallow ledge, in hopes of finding an early kicker. He had two good fish roll on it but miss and not another bite. He left, went to his first grass spot and unfortunately the struggles continued.

Vitaro admits he was a bit anxious on the first day, when he weighed in 11 pounds, 14 ounces, but he relaxed enough to turn it around on days two and three. He hooked about 70 percent of the fish that came through the mat to eat his white Strike King Sexy Frog on the final two days and finished with 36-13. Vitaro ended up camping on the same grassy area those last two days because it was the only grass bed that was protected from the wind.

A slow retrieve and an internal rattle were keys to his presentation, as was timing.

“There were two windows each day,” he says. “It’s like each was a magic hour. But every day I’d leave them biting.”

The first window opened from about 9 to 10:30, give or take. The second came at around 12:30. Strong winds the last two days forced Vitaro, who was fishing farther from takeoff than anyone else, to head back early, hence his need to leave during the key afternoon window.

He says his fish were a bit spooky, and most bites came way at the end of long casts. 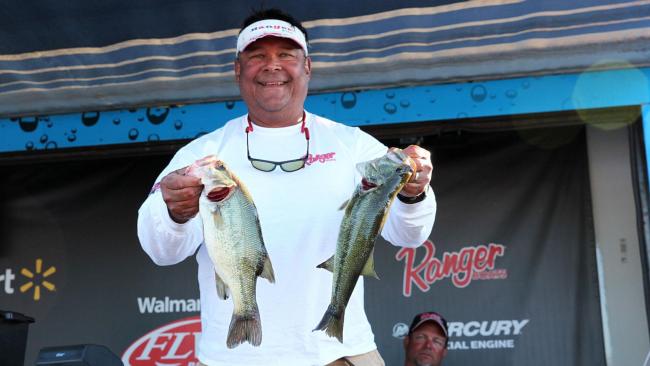 It was a blessed area – a spot full of life, says Ohio boater Ken Garbe of the area where he spent his full three days of competition.

“I think I found the only area in this lake with deep grass,” Garbe says. “I found one little pocket on the first day in practice. It had gizzard shad a foot long. On the first cast I had one blow up on it.”

That bite was all Garbe needed to know he’d found his starting area, and he never left. The 2-acre patch of grass was about 7 feet deep and full of that good green stuff – not like the brown dead stuff he saw everywhere else. Eagles, deer, coyotes, otters and all sorts of wildlife were there too, and Garbe just felt like it was a special place.

He fished around the grass in a circle using a Spook in the morning and then ripping a ChatterBait or Rat-L-Trap out of the grass the rest of the day.

“This small pocket had a ledge out in front that protected it,” Garbe adds. “It was protected from any wind. No wind could blow those weeds out.

“I enjoy coming to this lake every year,” he adds. “I went to fish the Hoosier Division this year just so I could fish this lake [in the Regional].” 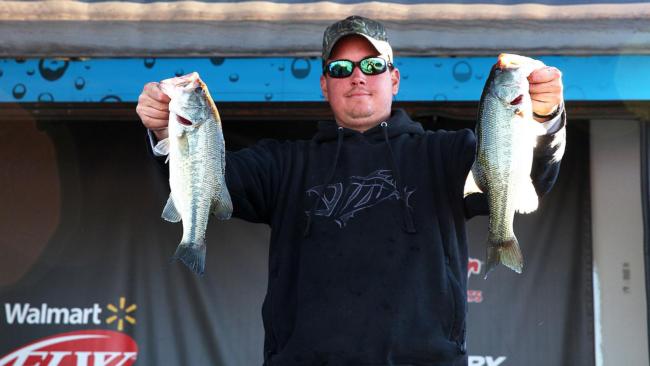 Sykes Wins Again from the Back of the Boat

Two Ranger boats are better than one, and Hamilton, Ohio, co-angler Ryan Sykes knows what it’s like to win a pair of Rangers. He won the 2014 BFL Regional on Kentucky Lake and defended his title this week with a three-day total of 27 pounds, 8 ounces.

Sykes’ smartest decision was probably his choice to lean heavily on a bait that has produced for him time and again: a white and chartreuse Z-Man ChatterBait. The vibrating jig, which Sykes rigged with a Strike King minnow-style trailer, came through for him big time on day three.

Sykes’ boater partners put him on a mix of grass, rocky structure and open flats. In grassy areas, where he didn’t throw the frog, he worked the ChatterBait on the outer fringes. Elsewhere, the key was covering water and hitting any target that his boater missed.

“He [day-three boater partner Brent Anderson] had the fish located. We were just flat fishing,” Sykes says. “I feel very confident throwing a ChatterBait when I know I’m around fish. I love how the fish school up here. It’s just a great fishery.” 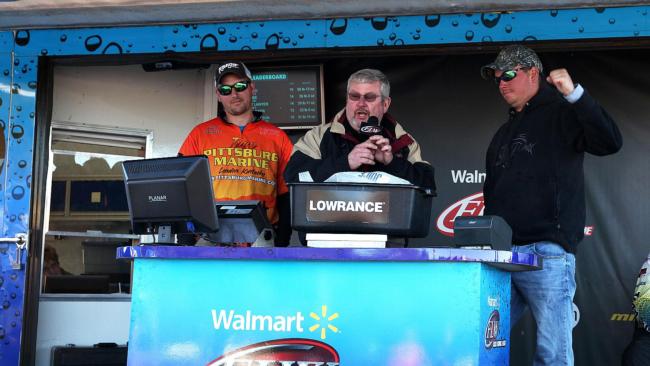 Here are the qualifiers.