More fish are moving out, but little current makes them a challenge to catch 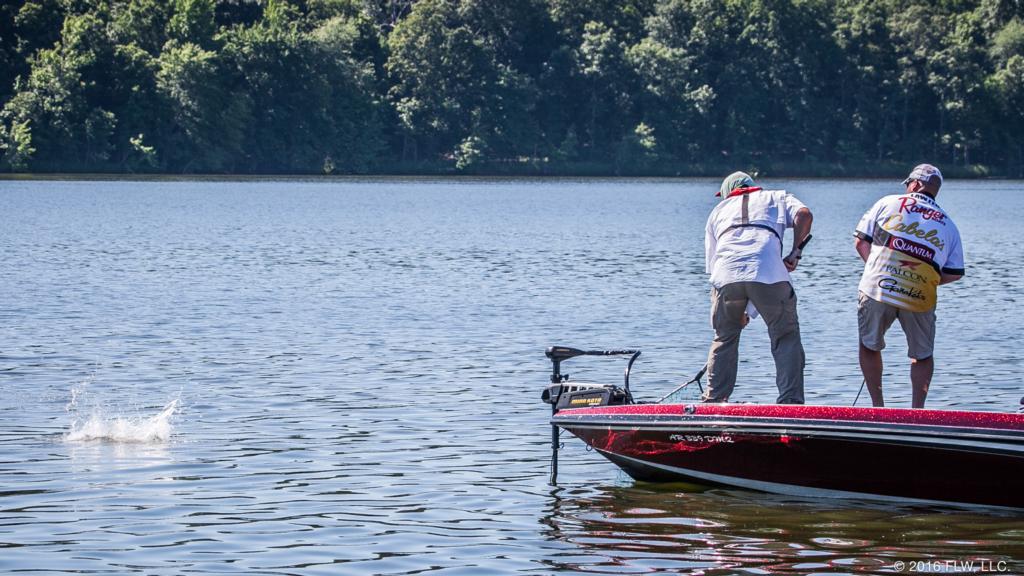 Seasonal changes are afoot, and Kyle Weisenburger took the hint, as he made a key move that helped lift him to third place on day two of the FLW Bass Fishing League All-American on Lake Barkley.

“I was originally targeting fish that were still in the backs of the bays and creeks, but there was just no wind or movement of water back there, and it was just dead today,” Weisenburger says. “You’d see the bluegills swimming around suspended; there was just no activity.”

Despite forecasts for daytime highs in the 90s, today only hit the upper 80s. That’s still pretty warm, but other factors also impacted the day’s productivity.

Probably the most significant element, though, was the lack of current through most of the day. According to TVA.gov, Barkley Dam released 8,400 cubic feet per second of water from 7 a.m. until noon, but increased the flow to 17,200 CFS from 1 to 4 p.m.

Bringing all of this into focus, Weisenburger traded his shallow game for an offshore effort. Dragging a football jig and cranking a Strike King 5XD yielded most of his 13 pounds, including a nice smallmouth that went about 3 pounds.

“Since it was like that, I decided to get out more toward the main lake, where maybe even a little bit of boat wake would stir up a little bit of water movement,” he says. “I moved out to some deeper areas because I just feel there are more fish going to those areas now.

“The water temperature was measuring 83 to 84 degrees back in the creeks, and I knew that it was getting to the point that if those fish were there, they wouldn’t be there tomorrow. They’re moving.”

Co-angler leader Adam Wood says he saw a distinct uptick in activity when the current increased. Noting that main river channel buoys were laying over more, he anticipated greater activity.

“We pulled up on a spot about 2 o’clock, and we both [he and boater Jamie Hartman] caught two keepers in about 30 minutes,” he says. “So the bite was certainly better the last half-hour.”

Sixth-place boater John Vanore also experienced an afternoon surge. After pitching a Reaction Innovations Sweet Beaver around wood and chunk rock in shady pockets, he transitioned to shallow, woody flats and improved his effort with a Strike King KVD 1.5 square-bill.

“There was a lot of shad on the flats, so we started catching the bass when the current got them moving and positioned them tighter,” Vanore says.

In fairness, some have fared well with the shallow cover, but largely, summer’s approach is putting the squeeze on remaining opportunity. Weisenburger says he’s not wasting any time on what is likely a dwindling pattern.

“I’m not sure what I want to do in the morning, but it’s supposed to be pretty similar to today’s conditions, so I do know that when that sun gets up I’m definitely going to be offshore,” he says.