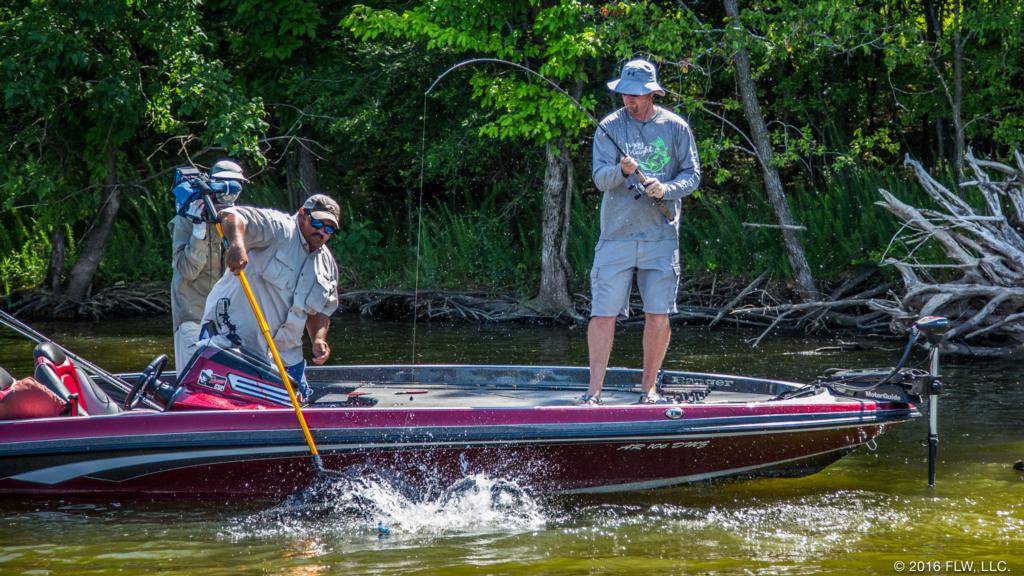 With the air temperature climbing into the low 90s by 11 a.m., the 2016 FLW Bass Fishing League All-American on Lake Barkley devolved into a grueling test of endurance Saturday morning for the 10 finalists and their co-angler partners vying for respective championships. The final weigh-in is set to begin at 5:30 p.m. at Kentucky Dam Village State Park in conjunction with the Walmart FLW Tour event taking place on Kentucky Lake.

By noon, one All-American angler – John Vanore of Mullica Hill, N.J. – had reported a limit. Vanore is in sixth place and was about 6 pounds behind tournament leader Jeremy Lawyer after day two. As has been the case for the past two days, Lawyer got off to a slow start and had only two keepers in his boat’s livewell by midmorning. However, one of them was estimated to weigh more than 5 pounds.

Other contestants, including Jim Eakin of Clarksville, Tenn., Mike Devere of Berea, Ky., Drew Boggs of Lebanon, Tenn., Kyle Weisenburger of Ottawa, Ohio, and Thomas Helton of Charleston, Tenn., reported two keepers apiece. Oddly, considering how high inshore water temperatures are, the anglers fishing shallow cover have been faring better than the offshore fishermen this morning. Vanore is flipping jigs in the Little River arm of the lake. Likewise, flipping specialist Boggs is sticking to the far upper end of Little River.

Lawyer, of Sarcoxie, Mo., finished second in the 2015 All-American on Kentucky Lake. If he can hold on to the lead this afternoon at Barkley, he’ll earn more than $100,000 in prize money and be accorded a place in the upcoming Forrest Wood Cup on Wheeler Lake in early August.