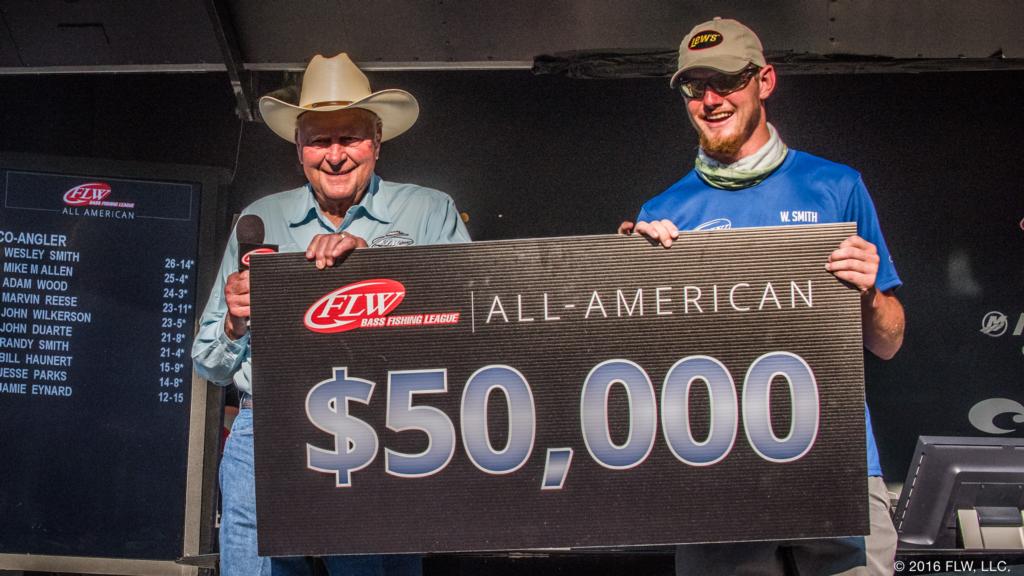 Although limits eluded him, Wesley Smith put together a three-day effort that tallied 26 pounds, 14 ounces and earned the Vinemont, Ala., co-angler the 2016 FLW Bass Fishing League All-American victory on Lake Barkley.

After placing sixth on day one with four fish that weighed 8-15, Smith moved up the leaderboard on day two with a trio that went 7-06 and moved him into fourth place. On day three, he added four fish for 10-09 and sealed the deal with a winning margin of 1-10.

“When I started fishing with that bait, I didn’t know why they were biting it,” Smith says. “My boater clued me in that it looks just like the crawfish swimming in Lake Barkley. I was fishing around bluegill beds too, so I think this jig color imitated bluegill, as well.” 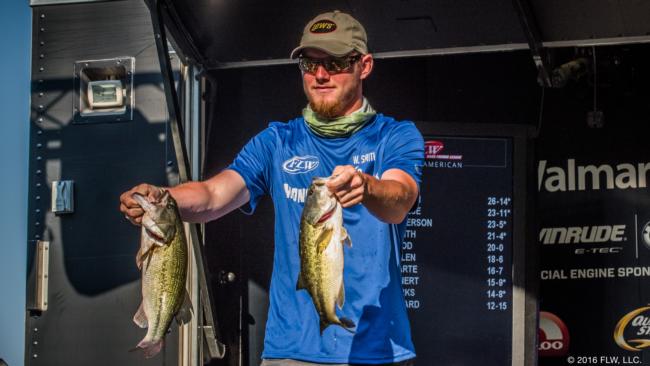 Smith chose to swim his jig, a tactic he felt would best fit the conditions he faced.

“The water was dark and muddy, so I was wanting to key in on a reaction strike,” he says. “If it’s away from them, they can feel it swim by. They can see it better too, so I think that helps.

“I didn’t catch a limit either day, but I feel like swimming the jig keyed in the bigger bites, instead of catching a lot of smaller ones. It was a quality over quantity deal.”

Smith fished offshore and shallow habitats, but only caught fish in the latter. He fared best around woody cover. The majority of his bites came later in the day when the Barkley Dam operators started pulling more current.

“I could not get a bite in the morning,” Smith says. “Today [Saturday], I did not have a bite until 10:30 or 11. The day before, I didn’t have a bite until after 12:30. I think the sun getting up helped with the water clarity. They could see better.”

After coming up one fish short on the final day, Smith recalls an early tragedy that could’ve sunk his ship.

“The first day, I weighed in four fish, and I lost a 4 1/2-pounder,” he says. “The second day, I didn’t really miss anything. Today, I had a couple of fish try to get my jig when I was pulling it out of the water. But I didn’t really have the fifth one on.”

Smith says his victory fulfilled a quest that has dominated his thoughts since earning his All-American berth by winning the 2015 BFL Wild Card on Lake Hartwell.

“I’ve thought about this every day for eight months,” Smith says. “That was all I could think about. I have to thank God for this. There were times in the tournament when you feel like, ‘I’m not going to make it.’ Like day two – at 12:30 I didn’t have a fish. But it’s like God said, ‘All right, it’s your time.’ So if it’s meant to be, it’s meant to be.”