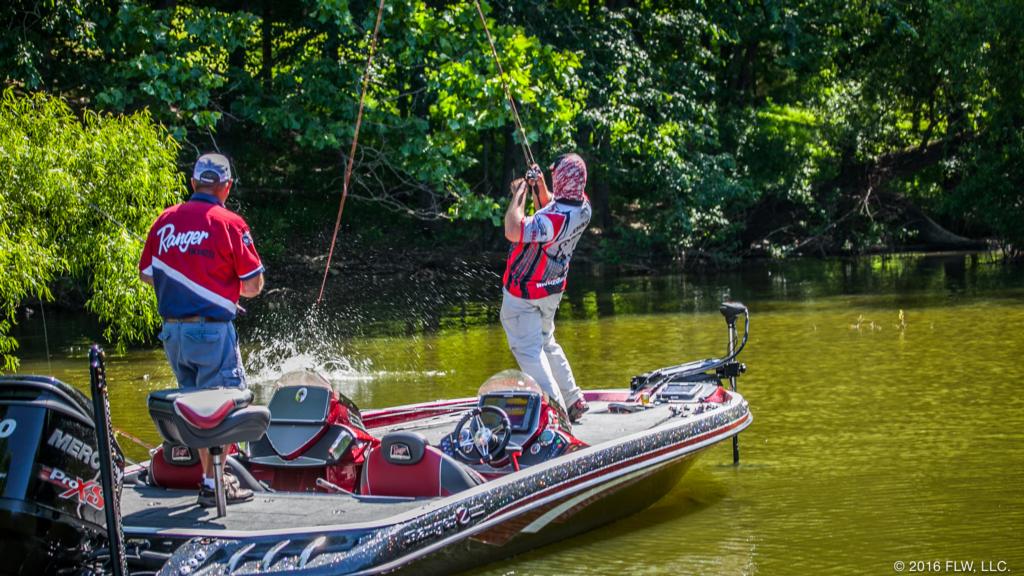 FLW Bass Fishing League All-American champion Jeremy Lawyer compiled his winning weight of 50 pounds, 12 ounces on Lake Barkley by establishing a milk run of sorts that included offshore brush piles, terraced ledges at the mouths of bays and feeder creeks, and stretches of bank that were close to channel drop-offs.

Others in the top 10 followed Lawyer’s script to some degree, with a few notable exceptions. The most important difference between him and his closest competitors was that he was able to count on a few big bites all three days, and get them in the boat. 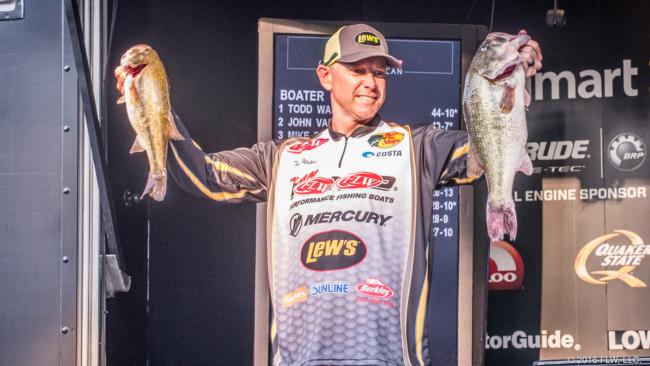 Walmart FLW Tour star Bryan Thrift would have been envious of the way this Tar Heel veteran picked apart docks in the Little River and elsewhere. Todd Walters, who weighed in 44 pounds, 10 ounces and took home $20,000, started the tournament by fishing shallow bank cover with his homemade 7/16-ounce jigs (green pumpkin), but he moved out deeper as the water began to recede slowly by a few inches a day.

In the final round, he skipped the jig under docks in about 6 to 8 feet of water, as well as into adjacent buck brush, with a Lew’s 7-foot, 2-inch, heavy-action rod and Lew’s baitcaster loaded with 20-pound-test Sunline Shooter fluorocarbon.

“I caught eight keepers this morning and had my limit by 10:30,” he said at the championship weigh-in. One of those hefted 6 pounds, 5 ounces – the All-American’s heaviest bass. 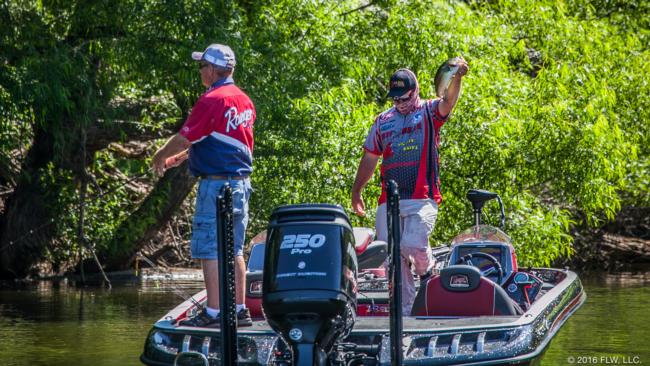 Clabion Johns of Covington, Ga., made the biggest move in the standings, jumping from 11th place with 13 pounds, 13 ounces after the first day to fourth on the second day with another stringer that weighed 13-13. With all those 13s, he was bound to be lucky. A final-round limit of 15-09 moved him into third with 43-03 total.

Johns’ approach was unique. Instead of combing offshore cover, he headed into the backs of coves and feeders to where “there wasn’t anything but willows, bushes, bass and mosquitoes” and fished a SPRO Bronzeye Pop 60 in natural red around bream beds.

“I don’t know if the bass were actively feeding on bedding bream, but they most definitely were associated with the beds and hanging around,” Johns recalls. “It got to where I was calling shots. I’d say to my co-angler, ‘There will be one there,’ and sure enough, the next cast, boom, they would choke it.” 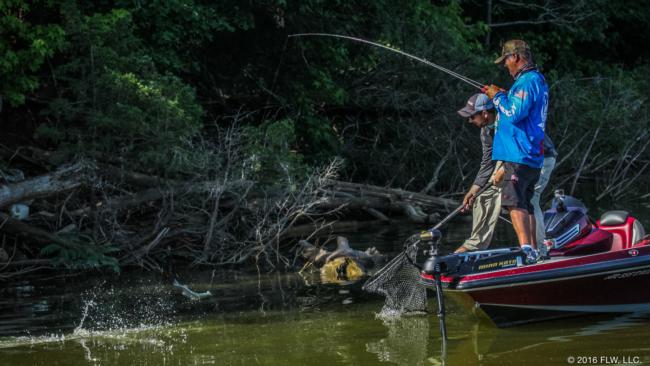 Meat and potatoes, Moon Pies and John Vanore – nothing fancy, but they all get the job done. While other competitors were racing around the lake looking for a consistent bite, the New Jersey veteran was flipping bushes and wood piles up the Little River within a couple of miles of the ramp. The results were three limits and plenty of culled fish for a 40-pound, 7-ounce total.

“The shady spots where there was a mix of chunk rock and wood cover in 1 to 3 feet of water were definitely the most productive for me,” says Vanore, who came out of the Bass Fishing League’s Northeast Division. “Of course, I broke off a bunch of fish that probably would have helped me.”

As noted, Vanore fished shallow except for a few times when he couldn’t pass up good-looking wood cover out deeper. On the last day, he flipped a shaky head into 16 feet of water and caught his biggest fish. As might be expected, he wondered if he should have been fishing deeper more often. 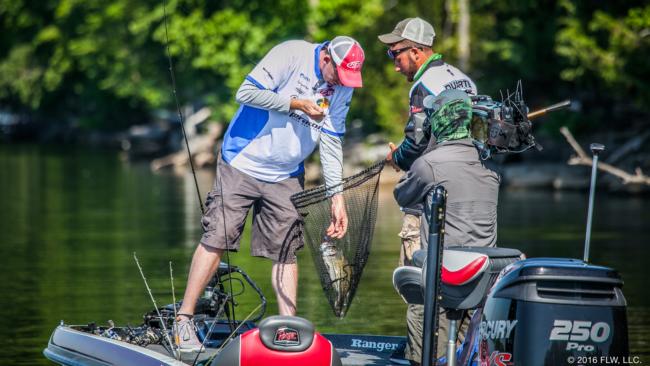 5. Weisenburger mixes it up for fifth

In his first All-American appearance, Kyle Weisenburger made it to the championship round by fishing shallow, which is his specialty. Late on the second day, however, he decided to switch gears after he caught a couple of keepers out of deeper brush in Hopson Creek on a football jig and took over the third spot in the standings.

The Ohio angler reckoned he might have found something to challenge Lawyer, but it was not to be. His plan was to catch a few bank runners early on a black buzzbait, then switch to the football jig and fill out his stringer in 8 to 12 feet of water. As others in the tournament discovered, however, the offshore bite was an iffy proposition.

Weisenburger wound up going back to his old routine of catch-as-catch-can and cobbled together a decent stringer of 11 pounds, 12 ounces the final day for a 40-05 total. A schoolteacher, Weisenburger relied on a Bass Pro Shops Johnny Morris CarbonLite 7-foot, 6-inch, heavy-action rod with a matching reel and 17-pound-test Bass Pro fluorocarbon. The football jig he used was a 3/4-ounce model from Slong’s (peanut butter and jelly).

“The water got hotter and fell some the first two days where I started out down toward Dover [Tenn.],” remembers Weisenburger. “It wasn’t going to get any better in shallow, so I decided to cut off my shallow stuff and fish deeper. It was encouraging on the second day when I was able to add two good fish with the football jig. After I tried the buzzbait with no success [Saturday morning], I went back to the same place and dragged the jig through there. It was like those two fish I caught Friday were the only ones in there, but it was the type of place where more fish should have been coming in.” 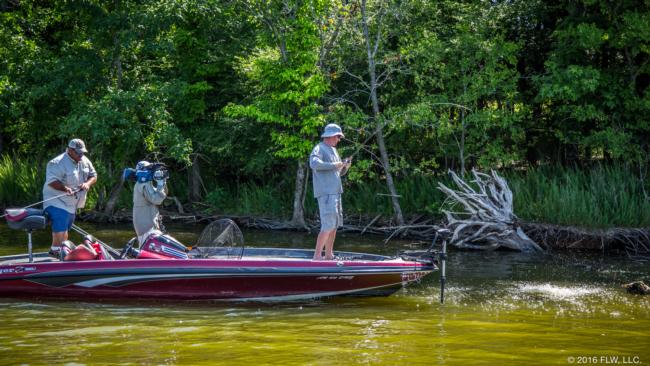 6. Boggs lives and dies with the shallow flipping bite

The LBL Division flipping expert is known to focus on quality rather than quantity, but couldn’t count on either in the All-American. After staking out a position right behind Lawyer on day one, Drew Boggs struggled to get a limit on the second day of the event, and it only got worse. He weighed four bass for 10-08 on Saturday to finish with 39-05.

Part of Boggs’ problem was that he spent much of his time fishing up the Little River and was sharing the stained water with the likes of Vanore and Mark Tucker of Missouri, who were also flipping bank cover.

“It turned into a struggle. Usually you’ll catch something – even a small keeper – every once in a while flipping along the bank, but I was going for hours without a bite,” says Boggs. “I started moving around some, not that it made much of a difference. And I lost a couple of big fish during the tournament, but that goes with the territory.” 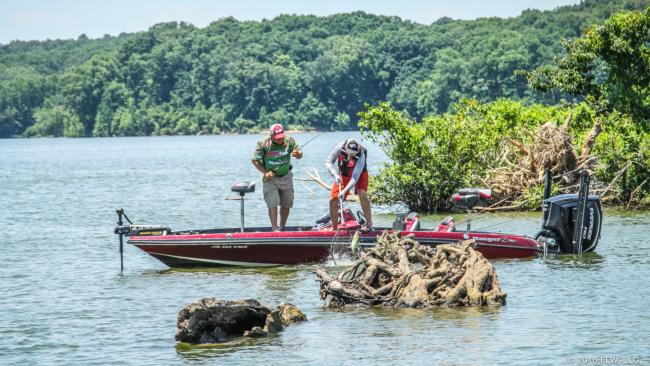 7. Devere junk-fishes into the top 10

Like many who didn’t make it to the top 10, Mike Devere never found a solid pattern to work with, and it was just stubbornness and experience that got the veteran into the top 10. Mainly, Devere was junk-fishing around Barkley’s midsection, cobbling together stringers here and there on main-lake ledges and flats adjacent to the channel, as well as shoreline clusters of washed-up wood cover. He used a variety of baits and presentations and ended up with 38 pounds, 9 ounces for the tournament.

“The first day I had a limit in 30 minutes, and I thought, ‘Oh boy, it’s just going to get better,’” he remembers. “It didn’t though; it got a lot tougher. I think the biggest reason for that is that the current never really got going enough to activate the fish.”

As a consolation, Devere’s last cast Saturday with the Booza Bug produced a 5-pound largemouth. 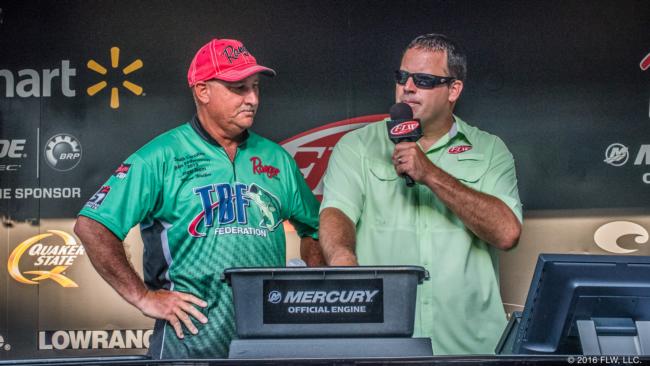 Nelson Walker was the only one of seven The Bass Federation representatives to make it to the championship round. He scrambled from 12th place to seventh place on day two, but lacked a fifth keeper in the last round and dropped a place in the final standings with 38-01 total.

Walker had a two-pronged plan of attack. Early in the day, he cranked secondary points and flats adjacent to creek channels with a Rapala DT6 (pearl and green), then switched over to a black-and-blue Reaction Innovations Sweet Beaver on a 3/8-ounce weight later in the day. On Saturday, he picked up a Yo-Zuri lipless crankbait (chrome and blue) and proceeded to catch two keepers with it from water about 18 inches deep.

“I caught about 20 fish today, but only four were keepers,” he said at the weigh-in. “I had a big one break off in a willow that would have really helped me, but everybody could say the same thing, I imagine.”

Walker paired the crankbaits with Daiwa rods and Pflueger baitcasters with Sunline fluorocarbon in 12- or 16-pound test, and 20-pound test for the Sweet Beaver. 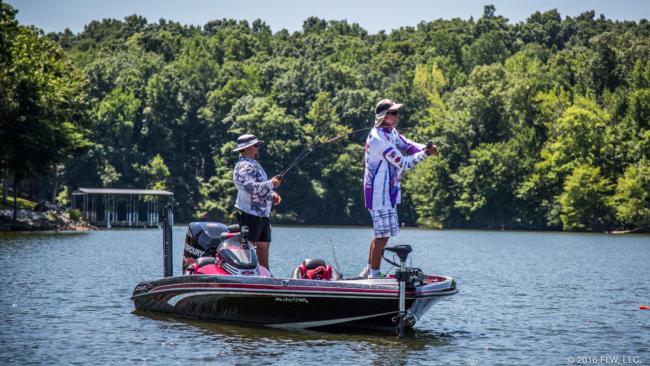 9. Helton drags jigs on a roadbed for ninth

Lawyer claimed first place in the opening round and never relinquished it. Thomas Helton did the same, but it was ninth place that he had a lock on. Saturday he took four fish to the scale as the roadbed in the back of a broad cove he was fishing finally stopped producing. He totaled 36 pounds, 2 ounces.

“Back and forth, dragging a 1/2-ounce Brush Puppy jig [green pumpkin with a touch of chartreuse] as slow as possible,” is the way Helton describes his presentation. The roadbed varied from 6 to 8 feet deep. Helton caught his best fish, a 4-pound, 9-ounce toad, the first day of the tournament. 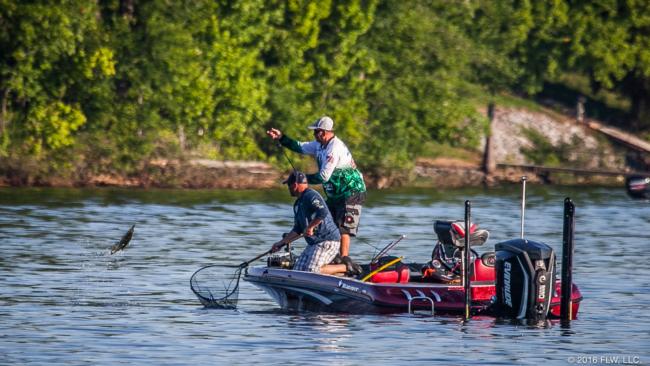 Jim Eakin’s bread-and-butter spot was a rounded secondary point that descended gradually to about 8 feet deep and had stumps, brush piles, and scattered shell beds and hard bottom at its deepest. It played out Saturday, when the Tennessee fisherman was able to catch just one keeper from it.

In fact, Eakin caught the 1-pound, 12-ounce bass first thing while other tournament boats were still racing out of the Lake Barkley State Resort Park Marina toward parts unknown. He finished with 28-10.

Eakin’s most productive lure during the event that was hosted by Cadiz-Trigg County Tourism was a Texas-rigged Reaction Innovations Kinky Beaver (green pumpkin) with a 3/16-ounce weight. He positioned his boat on the deep end of the broad point, cast toward the bank and dragged the soft plastic back, giving it a shake or two on the way.

“I caught seven [of 11 total] of my keepers off that spot, and I really didn’t have much else to go to,” notes Eakin. “The only way I could get any bites was to fish the Kinky Beaver really slow. It definitely wasn’t a reaction deal.”