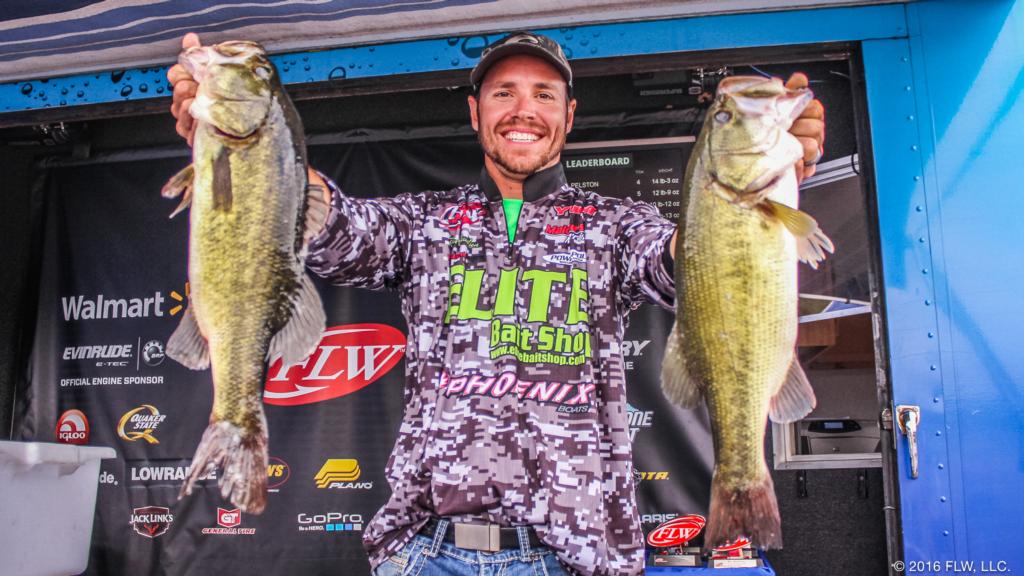 To say that Ryan Davidson won the 2016 FLW Bass Fishing League Regional presented by Mercury on Lake Chickamauga is almost an understatement. When the last fish was weighed for the three-day tournament (Sept. 29-Oct.1), Davidson topped the second-place finisher Dustin Huggins by a whopping 12 pounds.

Davidson, from Branchland, W.Va., ended the event with a total of 46 pounds, 14 ounces. He went into day three with a 4-pound lead, but he wasn’t sure his bite would hold up.

“I really didn’t know,” said Davidson afterward. “The first day I got a lot of bites, but yesterday [Friday] I didn’t get as many bites. I gambled this morning [Saturday] and went to a new area and caught two solid keepers in the first 30 minutes, and that kind of relaxed me a little bit. I probably had the bag I finished with by Noon today and thought I’d given myself a chance. Of course, it is Lake Chickamauga, and I know there are giants here, but I kept myself in contention.”

“I was fishing stuff I thought the fish would be staging in, coming into the thicker mats,” he says. “Day one I got a lot of bites and caught them quick, but that pattern kind of fizzled out. Day two I ran the same type of areas and couldn’t get bit.”

Davidson says he moved in closer to the bank, but continued mostly flipping.

“I was just hitting as many clumps of grass as I could, with trolling motor on high. You flip in there, you hop it one time and if you don’t get bit you’re on to the next clump,” explains Davidson, who moved into the lead after day two with 32-9. “Every fish I caught over 2 1/2 pounds I basically never got it to the bottom.”

On day three Davidson says he decided to break the pattern.

“I went to a new area and started throwing a weedless frog,” he says. “I caught two on the frog really quick in the morning. Then I missed two. They came up and knocked the frog out of the water. They were both probably 5-pound-class fish, and that kind of got me rattled. My co-angler caught one on a frog, but I was just shook up.”

Davidson had been saving an area he had found in practice, and given the struggles with the frog, he decided his flipping bite was the way to go to try and secure the win.

“I said [to my co-angler], ‘Let me go up here, and I can catch a limit and settle me down. Then we can come back here and fish the frog.’ As soon as I pulled up on it I caught three just bam, bam, bam. We didn’t go back. The frog bite is just too high risk,” he says.

Temperatures dropped significantly the week the anglers spent in Dayton. Most anglers agreed that the bass are in a fall transition, making them very difficult to pattern consistently.

“It’s a tough time of year. These fish are in transition, and it’s just cover water, cover water, cover water,” he says. “I fished all the way from Soddy Creek south to Chickamauga Dam. I ran a lot of spots and burned a lot of gas. And even though I was flipping I was moving fast. Hit one place, pull it out and go on to the next one.

“It feels good. I fished clean all week, and that made the difference,” Davidson adds. “On these tough tournaments when they bite you better put them in the boat.” 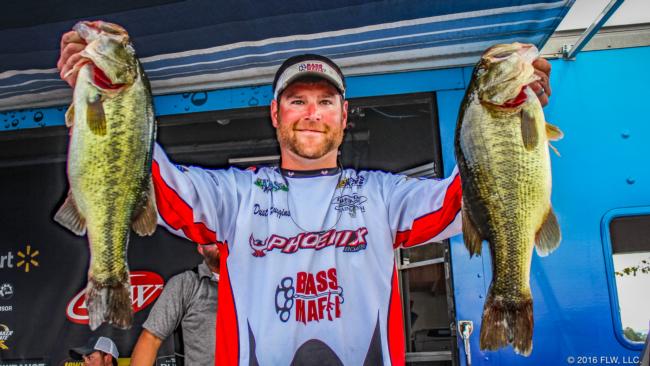 Dusty Huggins from Russellville, Ark., took second place, finishing the three-day event with 35 pounds even. He says most of his fish were caught late in the day.

Huggins was fishing in the well-known Chester Frost Park area, close to where Gabe Keen caught the state record largemouth (15-3) in February 2015. Huggins says his sweet spot was one area significantly smaller than a football field.

“I was in a bowl about 8 feet deep that was really clean, but with sparse grass around the edges of it,” says Huggins. “There were some big gizzard shad in there, and just every now and then fish would push them up. I just made circles around it. Sometimes I’d catch one punching the grass, and sometimes I’d see one blow in a big mat and I’d throw a frog out there and catch it.”

Huggins says the fact that his bite came late in the day really didn’t bother him on the final day.

“I was just happy to be there,” he says. “I knew I needed a fish to make the All-American. I just told myself that I know they’re going to eat. They’ve been eating. I’ve got a window I’ve got to capitalize on, and they did it and I caught them.”

“Today [Saturday] it was a little tougher,” he says. “There was a local guy fishing the same area with me, so I had to size down a little bit. I was using a Missile Baits Baby D Bomb. I just felt like with pressure you need to go a little bit smaller.”

Huggins walked away with a $10,000 check and a spot in the BFL All-American. 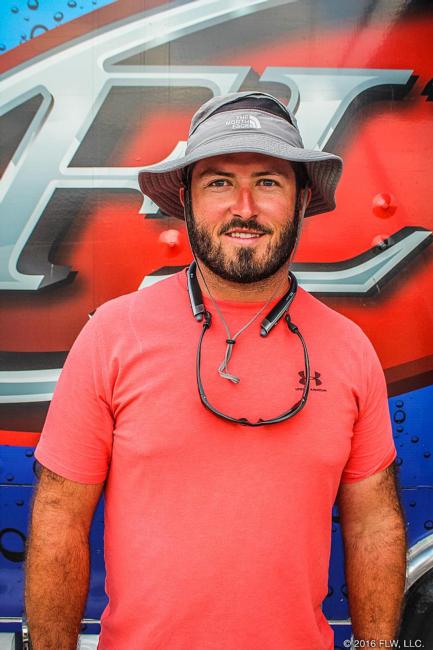 Stanley overcomes a “horrible” day one for third place

Matt Stanley from Alexandria, Tenn., ended the tournament with 33 pounds, 14 ounces for the third-place finish among boaters. He says he found plenty of great fish in practice.

“On Wednesday it was very easy to catch fish over 5 pounds,” he says. “I could have had 27 pounds if I’d wanted to, so I just went around and tried to find different areas.”

However, on day one it all seemed to fall apart for him.

“The first day I lost fish,” he says. “They’d come off coming over a log and all that kind of stuff. It was just horrible.”

He ended the day with a mere 8-1, far down the leaderboard. But on day two his game plan came back together, although he had to relocate his fish.

“The second day they kind of pull out off the bank a little bit,” Stanley says.

He went into the final day with a 24-8 total, putting him in fifth place.

“I was running all the way down to the dam [about 35 miles],” he says. “I fished everything main lake near the dam in very shallow water. Today [Saturday] they were in just inches of water. It was crazy how shallow I caught some 4-pounders.”

Stanley says his go-to bait was a 3/8-ounce Zorro Baits Booza Brush Bug with a Zoom Big Salty Chunk trailer. He won a $5,000 check and a coveted spot in the BFL All-American. 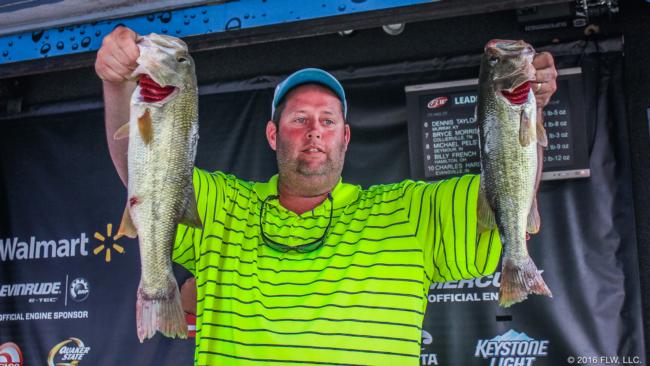 Although he’s been fishing bass tournaments for years, first-place co-angler Jimmy Terry from Mabelvale, Ark., says this was the first tournament of any kind he’s ever won in his entire life.

“I’ve fished a bunch of tournaments around home where I felt I had a chance,” he says. “I’ve gotten a bunch of seconds, eighth, 11th. I guess to win a Regional in the BFL is a true blessing.”

Although he finished with a total weight of 20 pounds, 11 ounces, Terry’s outlook wasn’t very promising on day one.

He admits that the fish he and his boater partner found the second day came with a little bit of luck.

“The second day my pro that I drew wasn’t on any fish and said if I had any ideas, to come up with them. I looked at his graph right there around where we were and said, ‘Let’s go try this right over here,’” says Terry. “We went to a long point that came out with grass on top of it. They weren’t on it, but he eased over to a bank and grabbed a spinnerbait and we just started whacking them with a spinnerbait.”

His day two weight of 8-6 pulled him from 38th place all the way to fifth place among the co-anglers going into the final day.

“I was behind 6 pounds starting off day three,” he says. “I fished a jig all day and caught all three of my fish on a [Strike King] Bitsy Flip Jig. It’s a small jig I love throwing in cold water. But it has a small skirt on it, and I don’t like the small skirt so what I did was put a Zoom Super Chunk on it. We were in dirty water, so I went with black and blue, and it didn’t let me down.

“I missed one fish first thing in the morning, and I thought, ‘This is not how you need to start your day off.’ And after that I didn’t miss another one.”

His day three weight of 8-10 was just enough to edge out Jacob Harris by 4 ounces.

The Lake Chickamauga Regional featured the top boaters from the Arkie, Hoosier, LBL and Mountain divisions. The top six boaters and co-anglers qualified to compete in the 2017 FLW Bass Fishing League All-American, which is a televised event with a six-figure payday and a boater berth in the Forrest Wood Cup on the line.