Wright Wins Tough One on Kerr 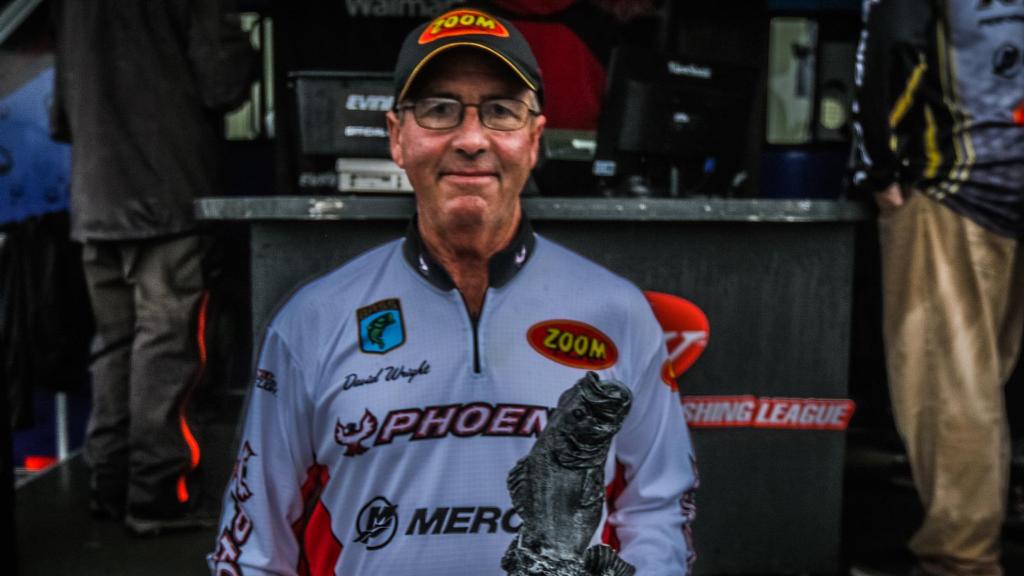 It’d be tough to say that the weather from Hurricane Matthew didn’t have an impact on the third day of the 2016 FLW Bass Fishing League Regional on North Carolina’s Kerr Lake. Yet, none of the competing anglers was complaining about it at the final weigh-in.

While the weights and number of limits certainly dropped off on the final day, each angler agreed that it was an even playing field that everyone had to make adjustments for, and some adjusted better than others.

Boater David Wright of Lexington, N.C., certainly made the right adjustments, catching a five-fish limit that moved him into the top spot for his second BFL win of 2016.

Wright’s limit was one of only four limits caught on the day in the boater division, as the pouring rain and windy conditions pushed most of the anglers away from what had worked for them the previous two days when conditions were pleasantly overcast with no rain and little wind.

“That storm made things tough. That’s for sure. It was the kind of day that you just have to grind through, but everyone else is doing it too,” says Wright, who weighed in a total of 43 pounds, 9 ounces over the three-day tournament. Wright won $20,000 and a new Ranger boat valued at $45,000.

Wright caught his first couple of fish on a Zoom Shakey Head, and figured he would stick with that throughout the tournament until he noticed something that changed his mind.

“I started out fishing a Shakey Head because they really weren’t biting, and I caught hardly any fish in practice,” he says. “The first day of the tournament I caught two or three on the Shakey Head. That morning I was winding my Shakey Head worm in, and the first place I stopped, two bass were following it. When I noticed that, I told myself I ought to be throwing a crankbait. So I picked up my crankbait and never threw anything else.”

Wright says he rotated between hot mustard-colored Rapala DT10 and DT16 crankbaits, and a bluegill-colored DT14, depending on how deep he was fishing.

“Around 11:30 a.m. I only had three fish for six pounds,” said Wright. “Around 1 p.m., I worked in a WEC Lures Crankbait and caught a 6-pounder. That’s the biggest fish I’ve caught in those waters in 20 years.”

On day two, Wright says he returned to his key areas and boated 15 keepers. He cited the DT14 as his most productive bait.

Wright says he continued rotating through his crankbaits on the final day of the event, and was able to piece together his limit on a fairly consistent basis.

“I went to a stump and caught two keepers in the morning,” said Wright. “From there, they got bigger. I caught a few more before lining up with two trees that I knew well. There, I caught a 4-pounder that I’m almost certain I had lost earlier in the event. I was feeling pretty good by then. I brought in what I had thinking I only had about 12 pounds, but ended up weighing more than 13 pounds.”

Brandon Gray of Bullock, N.C., was in third place after two days, but helped himself into the second-place finish after he “just went fishing” in some of the worst weather he’s ever faced as an angler. He landed a limit worth 10 pounds, 15 ounces.

Gray didn’t have any particular strategy to share, and says he was happy to bring five fish to the scale for the third consecutive day.

“It was tough, really tough,” says Gray, who did not cull at all on day three, and found no particular lure or method that produced enough for him to stick with it.

“It was really a grind. I ground out five fish, and that was it,” he adds.

Asheville, N.C., angler Richard Phillips was arguably the most affected by the big change in weather on day three, bringing only one fish to the scale. Phillips swooped into the lead on day two, but says the locations and methods he used on the first two days just did not work in the rain, wind and waves of the final round.

“I was lucky to catch one. It was a tough day for me today,” he says. “All my fish I’d been catching were either Pop-R fish or football jig fish in two places. And there were still fish in both places, but it just wasn’t suitable fishing there today.” 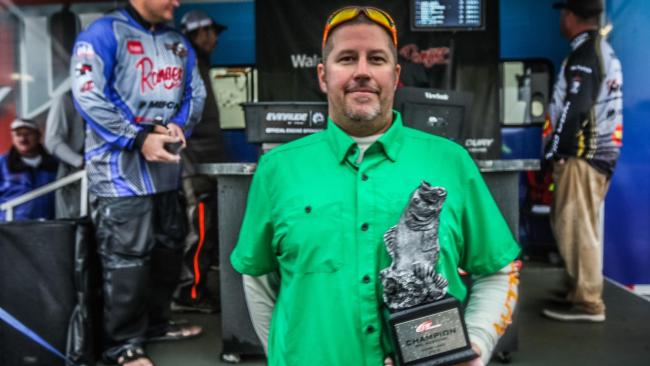 Co-angler Peter Balishin would argue that he did not make the right adjustments on the tough final day, catching only two fish. For that reason he’s thankful to have entered the final day with a big enough lead to hold on for the win.

Balishin happened upon his winning strategy a little bit by accident. After planning to key on the shad bite, his first couple of practice days did not go as planned, so on the last day of prepping he just happened to grab a spinning rod from his truck. The rod was already rigged with a lure he had not planned to use – a shaky head.

“I started throwing it and caught three 3-pounders right off the bat, and I told myself I’m going to be throwing this shaky head all day tomorrow,” Balishin says.

Day one didn’t start out the same way as the last day of practice.

“I went out on day one and couldn’t get bit. I started going through colors, going color after color after color until something worked, and finally I landed on a Zoom green pumpkin with blue flake in it. They just couldn’t leave it alone,” says Balishin. “My first cast with that color on day one, I caught an almost 4-pounder, and after that it was lights out.”

Balishin entered the final day in first place with 18 pounds, 4 ounces on nine fish and held the lead despite managing only two fish on day three. His total was 24 pounds.

He says it was tough to distinguish when he had a bite, and that caused him to lose what he thinks was about a 6-pounder on day one.

“I had to get it [the worm] just off the top of the rock next to the weeds, and they would just lip it off the top of the weeds,” Balishin says. “I didn’t know I had a bite most of the time. It would either feel mushy and heavy or the line would start moving. I lost about a 6-pounder because I thought I was stuck on a log. I just kept pulling it in and pulling it in, and when it got to the top I saw two big giant eyeballs. He opened his mouth when I tried to put some pressure on it, and he spit the hook.”

On day two, Balishin’s boater took them to deep water, and the shaky head bite was good there too once he got dialed in.

“The key was using a 1/16-ounce weight,” he explains. “I tried to go heavier than that when we were in deeper water and with the storm, but I finally realized I just had to stick with the 1/16-ounce and give it more time to sink.”

For his first BFL victory, Balishin earned a Ranger boat valued at $45,000.

The Lake Chickamauga Regional featured the top boaters from the Northeast, Savannah River, Shenandoah and Volunteer divisions. The top six boaters and co-anglers qualified to compete in the 2017 FLW Bass Fishing League All-American, which is a televised event with a six-figure payday and a boater berth in the Forrest Wood Cup on the line.