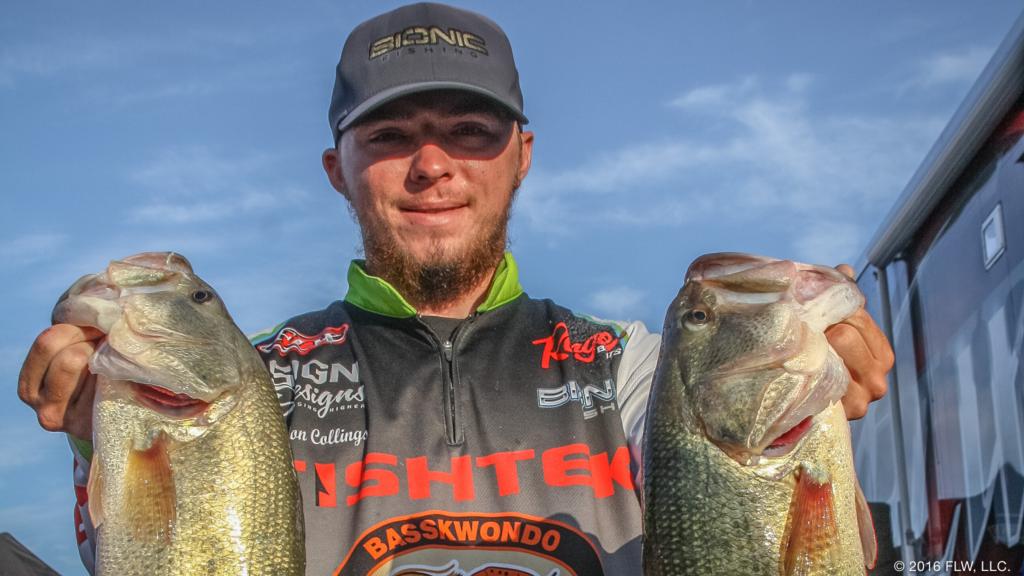 Though only 18 years old, Sheldon Collings of Grove, Okla., made a major career move by winning the FLW Bass Fishing League Regional presented by Ranger at Lake Dardanelle.

It was Collings' first victory.

Despite unseasonably warm and dry conditions, the 182-boat field found that the most famous bass fishery in Arkansas exhibited normal stained water patterns from Oct. 27-29, with current and wind being the dominant factors.

Collings, an Okie Division competitor, forged three formidably consistent days in the Arkansas River tailwater below Dardanelle Lock & Dam to weigh in a final total of 47 pounds, 4 ounces. That was 5 pounds, 7 ounces more than Melvin Dunn of Orange, Texas (41-13), and nearly a 10-spot above Justin Atkins of Florence, Ala. (38-13). 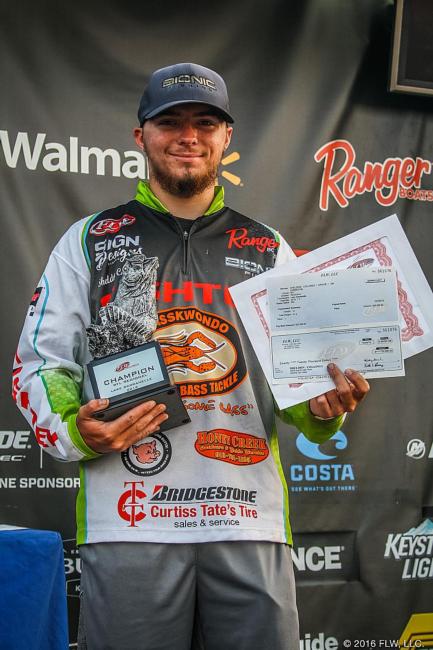 Although he weighed in an impressive limit of 15-13 in the first round, Collings trailed Jeffrey Smith of Knob Noster, Mo. (19-14), by a considerable margin. However, Collings maintained steady pressure in the second round to bring 15-7 to the scale for a two-day total of 31-4. Smith weighed in 9-5 and slipped behind at 29-3.

Collings finished strong on day three with 16 pounds to earn $20,000 and a fully-rigged Ranger boat package.

Rock wing dams are the only structure in the tailwater, but heavy current from the dam attracted big bass to them.

Collings' technique was simple. He threw a chartreuse/black back Strike King KVD 2.5 square-bill crankbait upstream into the current and retrieved it quickly with his 7.5:1 Lew’s Speed Spool baitcaster. He used a 7-foot, 1-inch, medium-heavy-action rod and 15-pound-test Seaguar InvisX line.

“Every spot that I pulled up to, I caught a 4-pounder,” Collings says. “I didn't catch a lot of fish, but I caught some big ones.”

The final weigh-in ceremony was emotional as Collings fought back tears. His mother and father joined him onstage as he uttered his closing remarks.

“I've never done good here before,” Collings said to the crowd. “I fished my butt off. To win this tournament means the world to me.” 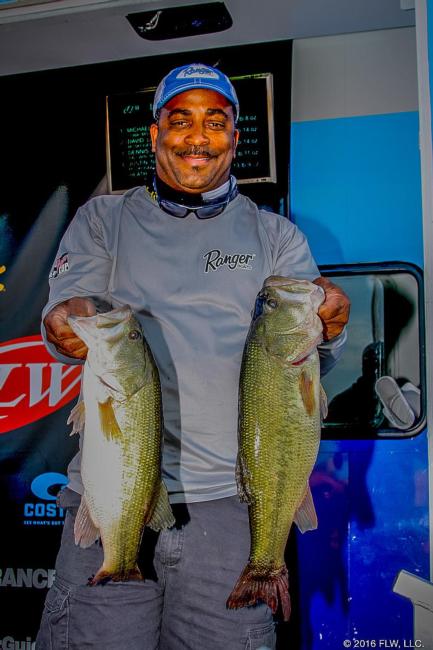 Melvin Dunn's knowledge of Lake Dardanelle is limited to Delaware Bay and Dardanelle State Park, but the riprap banks in those areas were generous.

“When the wind blew, I could get five fish off the riprap,” Dunn says. “If the wind didn't blow, I'd have to leave and go punch mats. I grinded that square-bill on the riprap. In fact, I grinded the bills off my crankbaits. I had to get a whole new set of them from a buddy of mine who didn't qualify.”

“I never changed my pattern,” Dunn says. “I kept my boat about 3 feet off the rocks and paralleled them all day. At about 12 o'clock, the dinner bell would go off every day, and I'd get a quick limit.”

Dunn says his Lowrance electronics were important. He used StructureScan to find hard rises near the riprap. That's where the fish were.

A lull on day one was costly. Dunn only weighed in two fish. 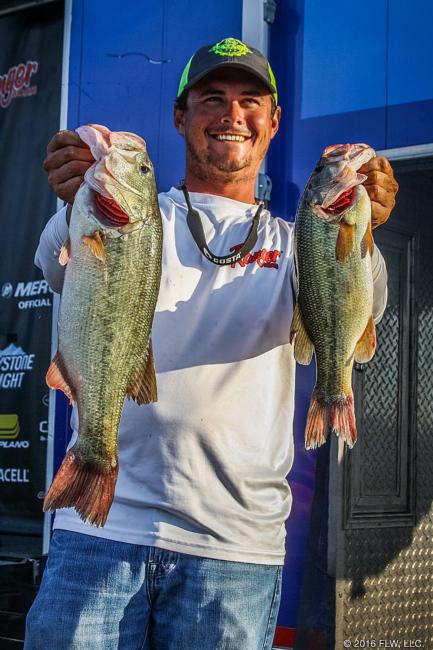 Though he won a tournament at Dardanelle in 2009, memories were of no use to Justin Atkins. Conditions demanded a different strategy, and he found success at a couple of drainage pipes and a shallow stretch of laydowns.

Then he made the decision that turned his fortunes.

“I headed upriver to throw a Rat-L-Trap and catch some spotted bass,” Atkins says. “I wasn't going to make the All-American catching spotted bass, so I turned around and went all the way back downriver and fished laydowns on the main river outside of pockets.”

At the start of the second day, Atkins found shad schooling at his first drainage pipe. He caught nearly 12 pounds in the first 30 minutes. He moved to the laydowns and finished the day with 16-14. The pattern faded to 12-5 on the last day, but it was enough to earn a spot at the All-American.

Atkins caught all of his fish on the pipes with a 1/2-ounce blue shad War Eagle spinnerbait. On the laydowns he used a chartreuse/white Stanley VibraShaft spinnerbait that has been out of production since 1991. Atkins has 15 of them.

“That spinnerbait, with its tapered wire, causes the whole wire to move,” Atkins says. “It makes a full wide rotation like a helicopter to make a good, hard thump. You get a lot more bites on that spinnerbait.”

His rod was a 7-3 Abu Garcia Veracity mated to an 8:1 Abu Garcia Revo STX spooled with Berkley 20-pound-test line. 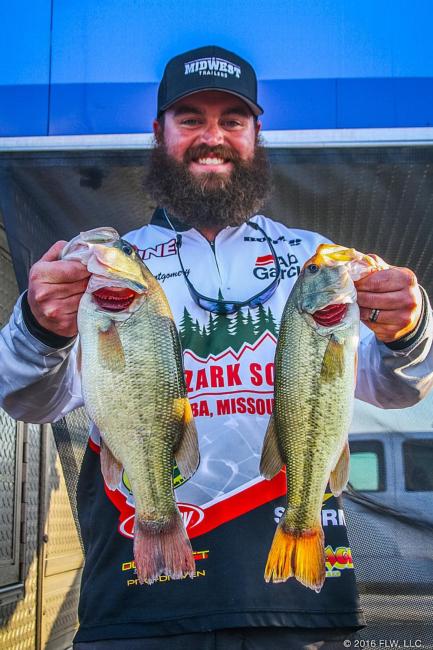 Mike Montgomery of Cuba, Mo., won the co-angler division at Lake Dardanelle with a three-day weight of 25 pounds that was worth a new Ranger boat package and a berth in the BFL All-American.

Adapting to the diverse styles of his boaters allowed Montgomery to weigh in catches of 5-4, 10-10 and 8-8, respectively. He fished the first day in Piney Creek, a well-known hot spot where Montgomery caught four Kentucky bass and a keeper largemouth by dragging a 6-inch green pumpkin Zoom Trick Worm through rocks.

He fished the second day far upriver in a remote section of Spadra Creek, where he fished all day with a 1 1/2-ounce white/chartreuse Strike King spinnerbait with a willow-leaf blade and a chartreuse/gold lime River2Sea Biggie square-bill crankbait.

“There were so many shad in there that it looked like it was raining,” Montgomery says of the effect of the shad flitting at the surface.

Montgomery fished with boater champ Sheldon Collings on the third day in the Arkansas River. Montgomery caught his fish off wing dams with a chartreuse/blue River2Sea square-bill.

The co-angler winner expressed deep gratitude to Collings for giving him the freedom to fish.

“He [Collings] had 16 pounds by 9:30,” Montgomery says. “He slowed down and said, 'I've got a really good bag. I'm going to let you get a limit.' He let me fish hard all afternoon. I got four keepers. He treated me as good as gold.”

The Lake Seminole Regional featured the top boaters from the Cowboy, Mississippi, Okie and Ozark divisions. The top six boaters and co-anglers qualified to compete in the 2017 FLW Bass Fishing League All-American, which is a televised event with a six-figure payday and a boater berth in the Forrest Wood Cup on the line.