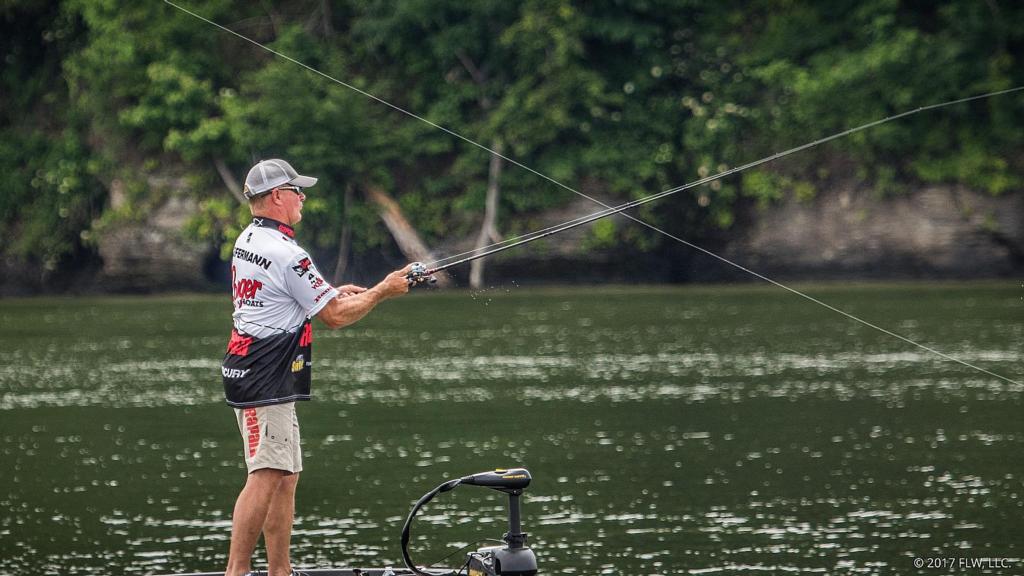 This story will be updated throughout the day with more from day one of the T-H Marine BFL All-American on Pickwick Lake.

With weigh-in starting at 3:30 p.m. CT, our reporters will be headed off the water before the next round of updates is due. With that in mind, this will be the last bit of info on the blog until weigh-in starts.

Jason Wilson and co-angler Ronald Smith Jr. both have two fish in the box, but neither of them have any big ones. Wilson says he lost a 7-pounder and four other good ones, which has to be a heartbreaking way to go in the All-American. Brad Leifermann has a limit, as he predicted in practice, and it goes a respectable 14 pounds or so. He seems satisfied with his day. Finally, Drew Boggs has two small keepers now. 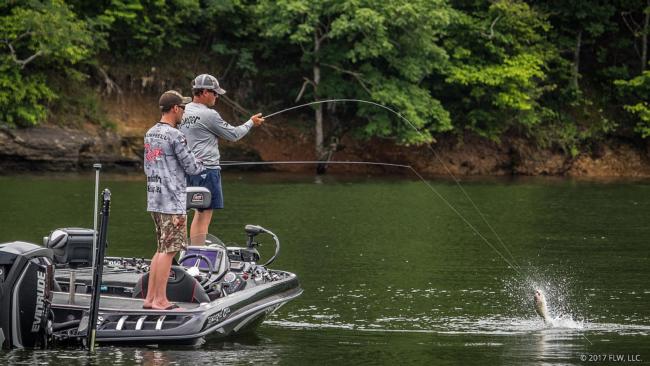 It’s past noon and some clouds have moved in over parts of the lake, but the weather is still very calm. The fishing seems to be improving however, and the afternoon ledge bite might be about to bust open.

Justin Atkins has added another quality fish since the morning and finished a limit for past 16 pounds. He just made a small cull, and seems to be doing well on the numbers at the moment. Brandon Gray has a limit at well, and has about 14 pounds in the boat and has culled twice. Barry Hooper and co-angler Peter Balashin each have limits for about 12 pounds – now they’re headed to look for some big fish. 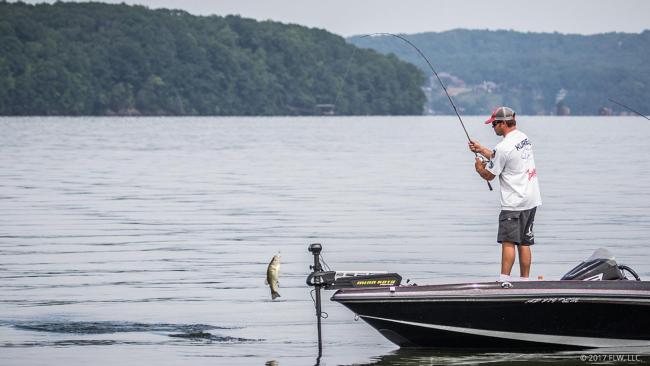 It’s starting to get pretty hot out on Pickwick – it’s June in Alabama and it feels like it. The midday doldrums seem to have set in pretty well, but there are no doubt still bass to be caught.

After making a short move, Mike Brueggen put a half dozen keepers in the boat in short order, but only two of them culled, giving him perhaps an extra half pound in all. Now, he’s got a solid 17 pounds and perhaps more.

In the unofficial lead is Marshall Deakins. The Tennessee boater says he’s got 18 or 19 pounds, and he’s one of the more accomplished ledge fishermen around – he could be tough to contend with this week.

Pre-tournament favorite Lloyd Pickett Jr., reports a limit for only about 12 pounds, and he’s been leaning on his trademark Carolina rig. Elsewhere, Chris Aswegan has one small one in the box. Fishing ledges, Jeff Knight has four keepers including a 4-pound smallmouth, and co-angler Greg Ravitsky has two fish, but they’re both 4-pounders. 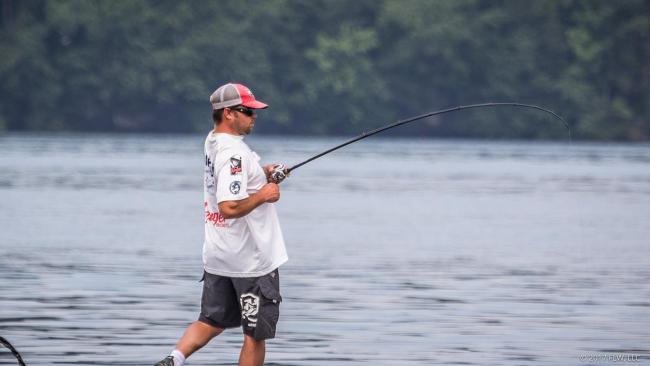 10:15 – Brueggen has the unofficial lead

Mike Brueggen is the leader in the house at the moment. He has five keepers, and says that with two big ones he’s got about 16 or 17 pounds. Fishing behind Brueggen, co-angler Mike Youngblood has two in the box.

Elsewhere, Justin Atkins is on the board with two fish, one good one, and we think he’s got about 7 pounds. Clayton Reitz has had a slow morning, but has one small keeper in the boat nonetheless. Todd Harris has one small keeper to his credit as well. Fishing north of Krueger Island, Melvin Dunn has a 2-pounder in his livewell.

As for the conditions, it’s fairly slick and calm, with a slightly overcast sky. 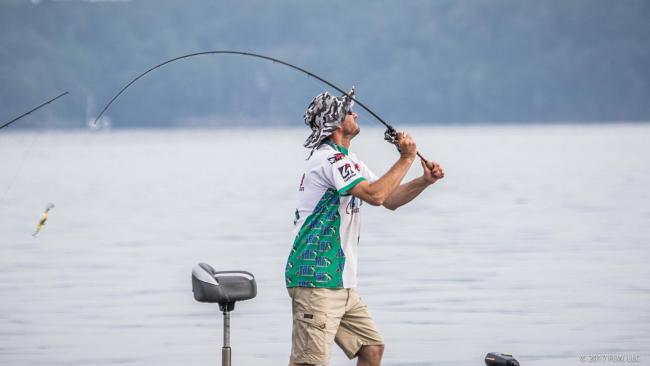 Nobody has jumped out in front yet on Pickwick, but everyone seems to be catching at least a few. Down near State Line Island, David Wright just put his first keeper in the boat. Nearby, Derrick Snavely and co-angler Brad Jernigan each have a keeper in the boat and have caught a pile of non-keepers. Also down the lake, William Merrick was up to three keepers when we left him.

Up more toward the Natchez Trace, Conrad Bolt recently cranked up a solid 2+ off a shallow ledge.

Up more near takeoff, Drew Boggs and Scott Bateman elected to start a little closer. Bateman has lost one so far, but otherwise there’s not much to report from the upper end. Down near the dam, Joshua Moore has zip and says he’s had a rough morning to start. 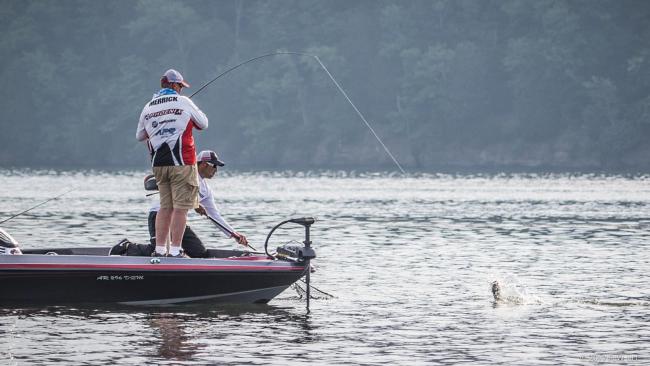 William Merrick is the first angler we stopped on today and he’s boxed up two decent keepers on dragging baits off a main river ledge to start his morning.

Elsewhere, Justin Atkins and Barry Hooper started near each other in front of Bluff Creek and have yet to catch a keeper. Nearby, Jeff Hager and co-angler David Primavera has each put a solid fish in the boat to start. As far as baits, we’re seeing a good mix of ledge stuff, from Carolina rigs to crankbaits, hair jigs and more.

It’s an absolutely beautiful morning on Pickwick. There is some light fog down on the lower end of the lake, but that’s lifted almost entirely now and should pose no risk for navigation. There is a little more debris floating than normal, but again, it should be no real navigational risk. The TVA is pulling about 60,000 CFS at the moment, and the wind is slight to non-existent – the conditions could hardly be better. 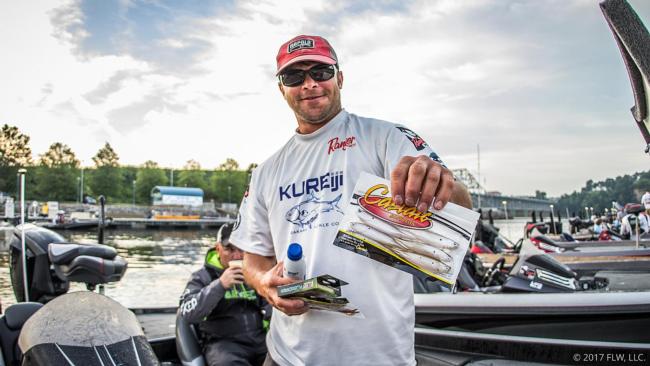 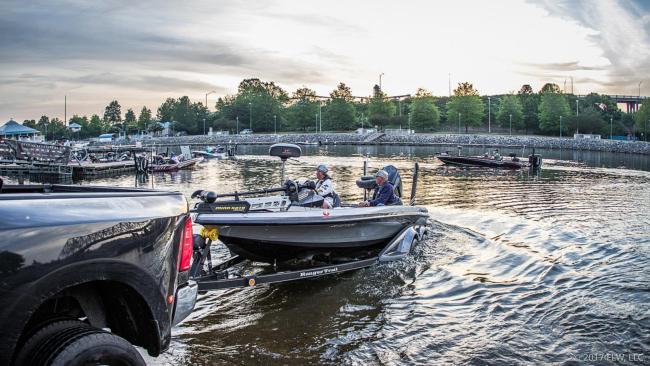 As 49 boaters and 49 co-anglers tackle Pickwick Lake for the T-H Marine BFL All-American hosted by Florence/Lauderdale Tourism, current events will be top-of-mind — literally and figuratively. With top awards of up to $120,000 and a Forrest Wood Cup berth on the line for boaters and up to $60,000 at stake for co-anglers, competitors will be contending with the effects of strong current moving through this Tennessee River impoundment.

“The lake is probably behind schedule because there’s been a lot of water running through the lake and the weather hasn’t really been hot yet,” says defending All-American champion Jeremy Lawyer. “They keep releasing so much cooler water through Lake Wilson that Pickwick hasn’t had a chance to slow down and reach its normal summer temperature. The water temperature is in the upper 70’s and for the first of June, that’s behind.”

In addition to the cooling effects, Lawyer says the massive water movement has created a scenario that’s good for fish; bad for fishermen.

“The problem with all this water is that there are not predictable hours of when the TVA dumps the water, so the fish don’t have particular times when the current prompts them to feed,” he says. “When they’re dumping water round-the-clock like they are right now, the fish can feed as they see fit.

“That makes for a harder day on the water because you don’t have those feeding windows; the fish can just feed as they please.”

Tennessee boater Lloyd Pickett says one of the biggest issues is forage. Current positions bait schools, but the excessive flow Pickwick’s experiencing has overwhelmed the bait.

“The lake has ended up a foot and a half over summer pool the last several days and the TVA has been running four generators 24 hours a day at the dam trying to bring it down,” Pickett said. “They’ve been pulling 100,000 cubic feet per second and they’re going to knock it down to about 49,000 CFS starting on day one, but all that current they’ve been generating has pulled a lot of shad off the ledges.

“A lot of the fish that we located before the cutoff were gone in practice. When they pull this much water through the system, the shad get relocated and the bass go with them. Typically, when they stop pulling so much water, within two or three days, the shad start showing back up; but the tournament starts today, so I think there’s going to be a lot of running and gunning, a lot of scrambling.” 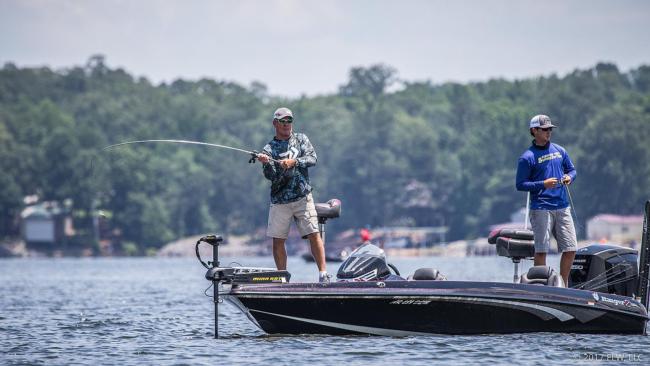 The ledges should still rule

Lawyer and Pickett both agree that the tournament will likely be won by targeting offshore ledges. The scene is certainly not as settled or predictable as we’d typically find in early June, but the vast majority of fish have moved to their summer haunts and we’re looking for most of the field to commit to this strategy.

That’s not to say that a handful of anglers won’t forego the offshore cluster in favor of targeting less-crowded shorelines where high water has put lots of shallow cover into play. In fact, Lawyer predicts a couple of top-10 finishers will advance through this route.

That being said, the offshore game maintains the greatest overall potential, so Pickett expects that a lot of fish will be caught on crankbaits, big spoons and Carolina rigs. Lawyer said that if the fishing pressure these offshore spots have already endured has the fish unsettled, he’ll turn to a Texas-rigged worm, a football jig or a hair jig.

Throughout the day, Lawyer says the competition for spots and the inherent rotations will play a big role in the overall picture. Given the randomness of the feeding periods, hitting the right moments might feel like spinning the roulette wheel.

“The guy that gets lucky enough to get the right timing on six to seven schools of fish a day without having to skip two or three holes because of the boat pressure will be the guy who really excels,” Lawyer says. “You really can’t predict that, but during practice, there was a lot of pressure on some of the same stuff and that’s really going to hinder your timing.”

Pickett, who says he caught about 15-16 pounds while scouting new areas during practice said he’s expecting 18 a day to make top-10 cut. He’s eyeing a winning weight of 70 — any way you can get it.

“Had it been a typical May and the water had been warmer, you might have been able to sit on one spot and get 70 pounds, but with the lake being like it is, I don’t think there’s a spot out there where you can get 70 pounds,” Pickett says. “I have 35-40 schools of fish, but to get that kind of weight, I’ll have to scramble around and try to fish a lot of them.”