What's getting the job done on Pickwick 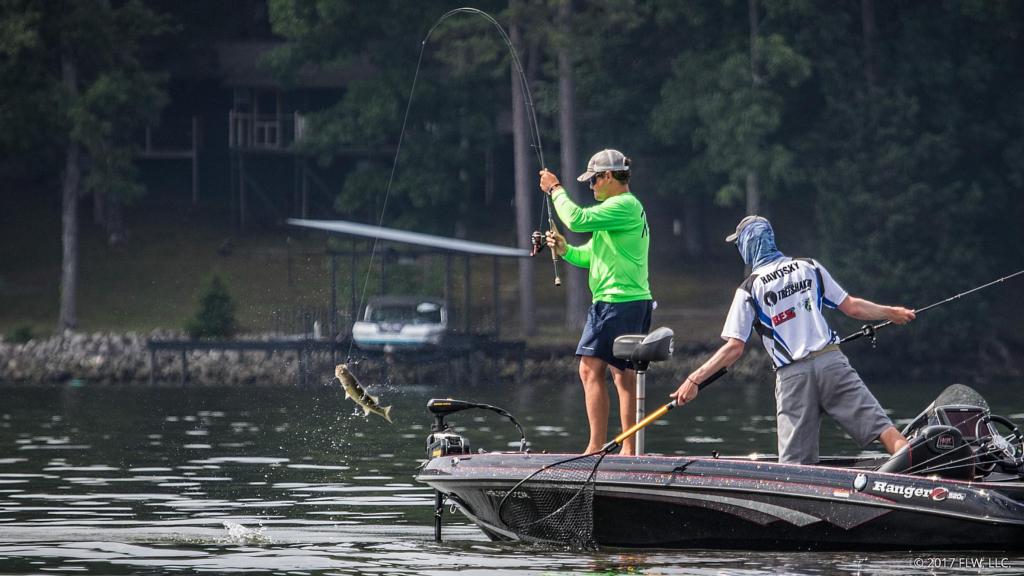 Day-one leader Marshall Deakins held onto the top spot and swelled his lead to an incredible margin of 10 pounds, 10 ounces with a two-day total of 45-1 in the T-H Marine BFL All-American. The Tennessee boater caught his fish by working a football jig across a rocky break line. Overall, most of the better limits outside of Deakins seem to be coming from deeper ledges. 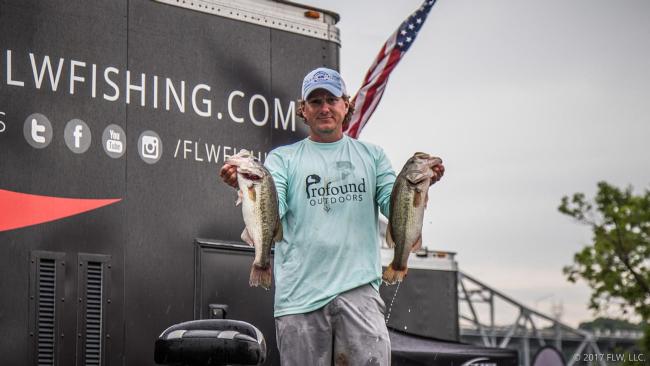 Slower current and lack of wind spelled a slow start for Brent Anderson. Nevertheless, the Tennessee fisherman stuck with his game plan, added 17-1 to the 17-6 he weighed on day one and climbed from fifth place to second with 34-7.

“I started on the same spots I fished yesterday and while I was culling at 8:30 yesterday morning, it took me ’til 10:30 to get a limit today,” Anderson says. “My overall quality was better, but my numbers were way down.”

Having struggled to dial in the offshore ledge game, Anderson was fishing shallow bars off the main channel. He caught 10 fish with just three keepers early on day two and decided the deal was not happening.

“Luckily, the very first deep school I drove over fired and I caught most of what I had there,” Anderson says. “I culled a couple of times on other places, but never got another school fired up.”

While cranking produced most of Anderson’s day-one fish, that bite was off today, so he switched to a Scrounger presentation to catch his fish. 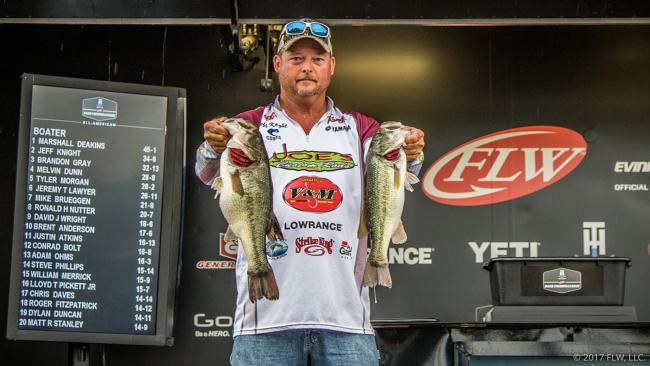 After placing fourth on day one, Jeff Knight gained a spot by adding 16-2 to his day-one weight of 18-4 to take third place with 34-6. Fishing far downriver, nearly to the dam, Knight attributes his success to a sweet little ledge area he found during practice.

“I went over it with my Lowrance StructureScan and it lit up like a Christmas tree,” Knight says. “I spun the boat around, caught one about 3 pounds and hit a waypoint. I’ve been sitting on that waypoint every day and it’s bam, bam, bam. The good thing is, they reload every day.”

Fishing reaction baits, Knight has given other spots a chance to produce, but he knew he could depend on the money hole.

“I stopped at one little spot near Waterloo and caught two keepers, ran to another spot, fished for 45 minutes and never got a bite, so I said ‘Let’s go,” Knight recounts. “I went to the mega school; I got my limit and my co-angler got his limit.

“We started back upriver and hit a few places, but then the rain started, so we got out of there before it got too bad.” 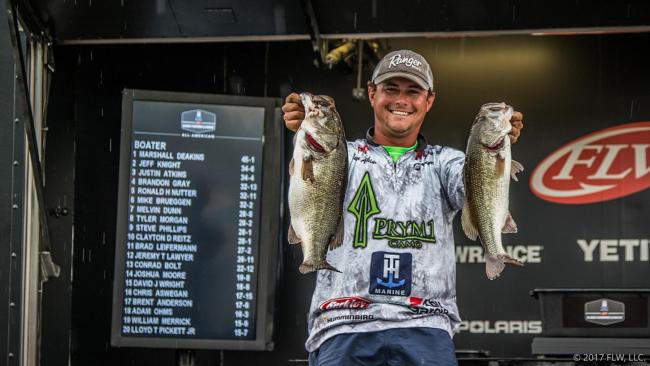 Posting weights of 16-13 and 17-7, local boater Justin Atkins improved from seventh place to fourth with a tournament total of 34-4. Local knowledge and an open-minded approach, Atkins says, has guided his effort.

“I haven’t gotten stuck on one hole or one pattern, I’m just riding down the lake and getting on what I can get on and letting the fish tell me what they want to bite and rolling with it,” he says.

One of the keys to his performance, Atkins notes, is monitoring the lake’s current and fishing appropriate depths.

“When you get a lot of current, they seem to get a little shallower and when you get less current, they tend to get deeper,” he says. “Keeping a good check on how much current’s running tells me which holes I need to check.”

With lower current flow today, Atkins fished in about 20 feet and caught his fish dragging a worm. Green pumpkin and black were his color choices. 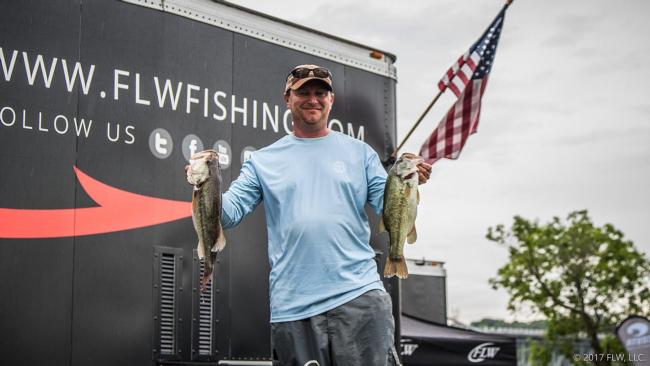 North Carolina boater Brandon Gray gained one notch in the second round by sacking up 15-11 and moving into fifth place with 32-13. Sticking with one major area and picking through lots of fish enabled him to secure his final-round spot.

“It started off fast and furious and I lost two good ones first thing this morning,” Gray says. “There were definitely a lot of fish biting and I just stayed patient, stayed in the area and kept my bait wet.”

Gray says he targeted a two-mile stretch of rocky “table top” size structures in 10 feet that required precision casting. Reaction baits produced all of his fish.