Top 10 Patterns from the All-American

How the BFL's best unlocked Pickwick 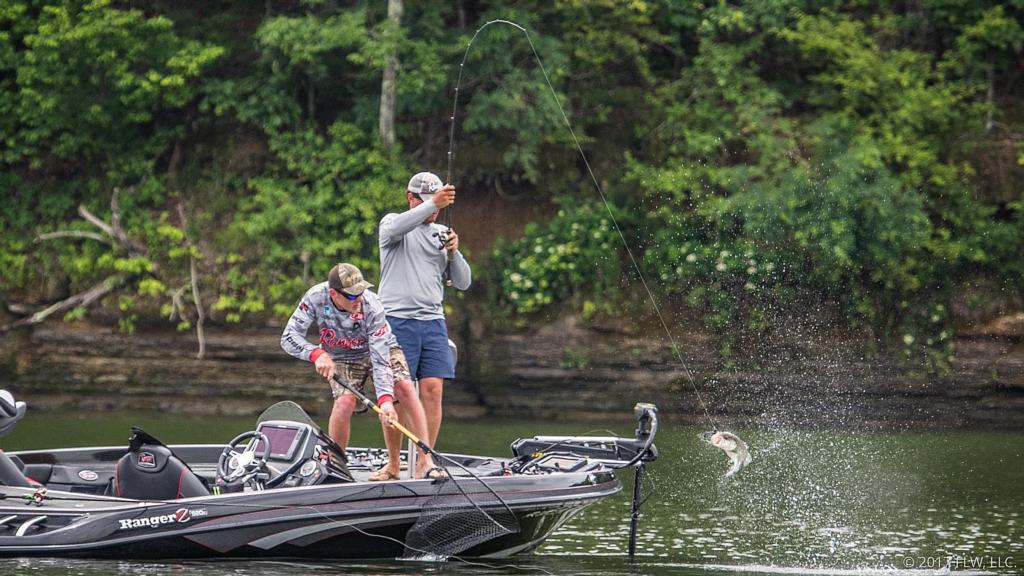 Leveraging a couple of key spots enabled Marshall Deakins to put together two strong days in the T-H Marine BFL All-American with two limits over 20 pounds. The strong start gave him a lead of 10-10 going into the championship round. The boater from Dunlap, Tenn., would struggle that last day, but eventually found enough bites to secure a respectable limit that pushed him across the finish line with a dominating margin.

Deakins and the rest of the crew mostly fished offshore on the famous ledge lake, but they all did it in slightly different ways. 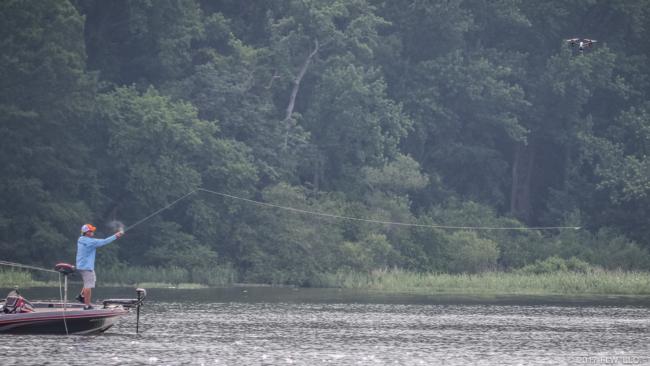 The most consistent angler in the top 10, Brent Anderson of Kingston Springs, Tenn., recorded limits of 17-6, 17-1 and 18-5 for a tournament total of 52-12. Giving a nod of respect to Deakins, Anderson adds that he brought a balance of ambition and realistic expectation to the final round.

“Marshall’s tough to begin with and he had such a big lead,” Anderson notes. “I always go into these things trying to fish to win, but I also knew that there was a pretty good pay difference between second and third, so I didn’t want to do anything too crazy.”

A guide on Kentucky Lake, Anderson enjoys graphing deep ledges and fishing deep schools of fish with clients, but he doesn’t like doing so in tournaments. Jockeying for position with other competitors, he says, is the biggest turn-off.

“I came down here two weeks ago and spent about four days trying to find some shallower stuff that’s too shallow to scan,” Anderson reveals. “I found two big groups of big ones and I really thought I was going to make a run at it.

“I started on these fish on day one and caught about 50 fish and left with 11 pounds. I knew I wasn’t going to win off of this stuff and I’m really surprised it carried me as far as it did.”

On day three, Anderson was checking one of the spots he had located in practice, but his fish were not showing. That’s when fate intervened in his favor.

“I was getting ready to leave, but I threw the Profound Outdoors Z Boss 20 and caught a 5-pounder,” Anderson says. “The fish swam into a brush pile, but I started tugging on the line and the fish swam out and came to the net.” 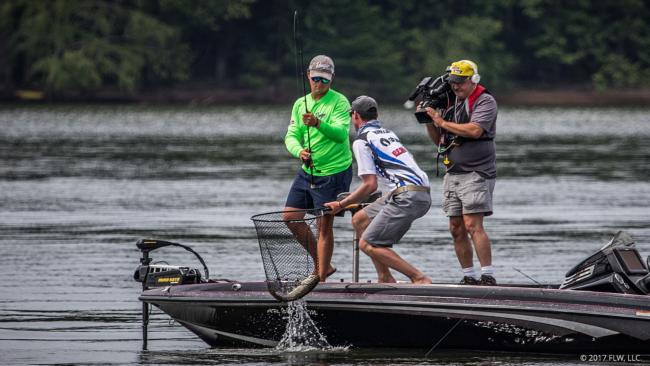 Local pro Justin Atkins improved from fourth to third in the final round. He placed seventh on day one with 16-13 and gained three spots on day two with 17-7. His day-three limit weighed 13-12 and gave him a total weight of 48 pounds.

Atkins thinks his knowledge of the fishery helped him overcome a preparation deficit. While some of his competitors invested multiple days of pre-practice before the cutoff, Atkins’ FLW Tour schedule prevented such recon.

“I got to idle around for seven hours (during the official practice day) and go out there Thursday morning and just wing it,” Atkins says. “I have a lot of experience on Pickwick, but just making it up as you go, sometimes you get a little behind the 8-ball. But it was good.”

Committing to the deep ledge game, Atkins caught most of his fish with a Profound Outdoors Edwin Evers Head Turner Stand Up Jig head with a black Zoom Magnum Trick Worm. He filled in a few limit fish with a smaller shaky head and a nail-weighted wacky worm.

“I didn’t really catch them cranking until the last day,” Atkins confesses. “I went down the lake and it was really tough because there wasn’t a lot of water moving. I noticed in the afternoon some water movement increasing a little farther up the lake, so I came back up and got on a shallow hole where I had caught them during a recent BFL .

“They weren’t on this hole when I checked it on Thursday, but they were on it the last day and I caught all of my weight in about 30 minutes on a Strike King 6XD. I wish I had gone back earlier.” 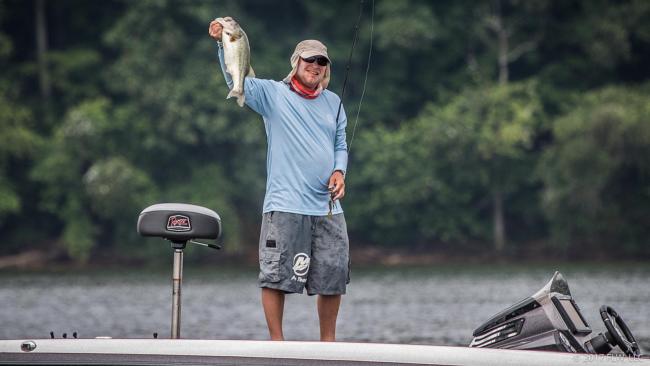 4. Gray goes to the grass for fourth

Foregoing the offshore tactics that occupied most of the field, North Carolina boater Brandon Gray chose the road less traveled along the shoreline and followed it all the way to a fourth-place finish with 46-3. It started, he says, with a solid pre-practice commitment.

“I came down here a week before the cutoff, pitched a tent, fished from daylight til dark, slept 6 hours each night and went back to the lake,” Gray reveals. “I was on a mission to figure this place out, but I know you probably can’t learn it in a lifetime; much less a week.

“I had to try and put together something that I thought was simple. I finally figured out something.”

What Gray uncovered was a dependable grass bite. Fishing from the bank out to 10 feet, he caught his keepers swimming a jig.

“It was a consistent bite for me and it was easy to find,” Gray says. “I fished the ledges and never got bit, so I figured I’d stay in the grass because I knew that’s where the fish were.” 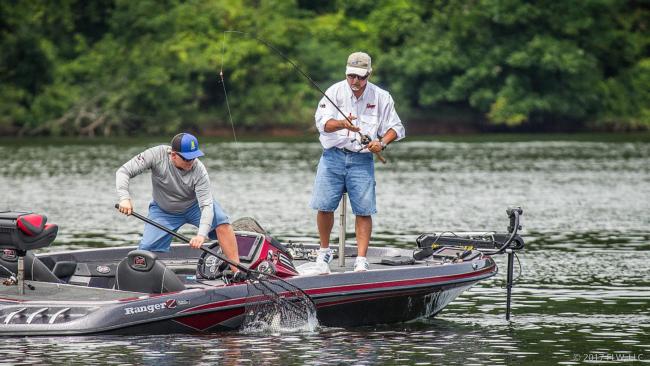 5. Pickett rides the rig to Fifth

Sticking with his signature technique, Carolina rigging, Lloyd Pickett Jr., of Bartlett, Tenn., sacked up a limit of 13-5 in the final round to finish fifth with 44-9. Pickett started day three in 10th place, after placing 14th on day one.

Using a long rod and building his rig with 4-foot leaders, Pickett baited up primarily with a Zoom Brush Hog and a YUM F2 Mighty Bug. He caught all of his fish on the rig, except for one that bit shaky head.

“I caught my fish in 21-25 feet of water,” Pickett discloses. “Everything I caught was deep. The reason I went deep was because of all the pressure these fish have gotten. I used a 1-ounce weight and made as long a cast as I could make.” 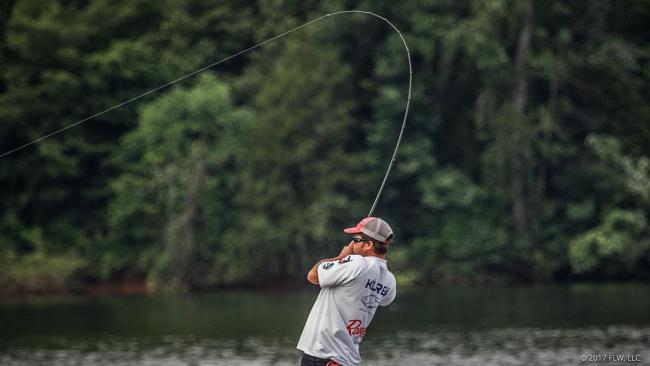 6. Moving to current key for Brueggen

Wisconsin boater Mike Brueggen got off to a strong start by catching the event’s second-heaviest limit, 21-8, and slipping in behind Deakins on day one. But Brueggen stumbled on day two, only bagging 10-10, and went to seventh. Finishing with 11-12 on day three moved him up to sixth with 43-14.

“The first day [catch] was all on a Scrounger head with a 5-inch Castaic Jerky J on the back, but on day two I couldn’t get them to bite the Scrounger good enough to hook them,” he says. “I probably had 40 of them bite it, but they were just slapping at it.

“The last two limits I scraped out were on a football head. I was dragging it uphill. If you can get away with that without snagging up every cast, it’s usually better.”

Brueggen says the spots he fished on days one and two dried up for him in the final round. Everything he caught on day three came from new water.

“They came from a completely different section of the lake; I hadn’t made a cast there all week,” Brueggen states. “I finally started idling (and graphing) and found some.

“About 11, they started biting. I thought they (the TVA) had started moving some water, but I think I just moved to it. There was a lot more flow on the top of the lake.” 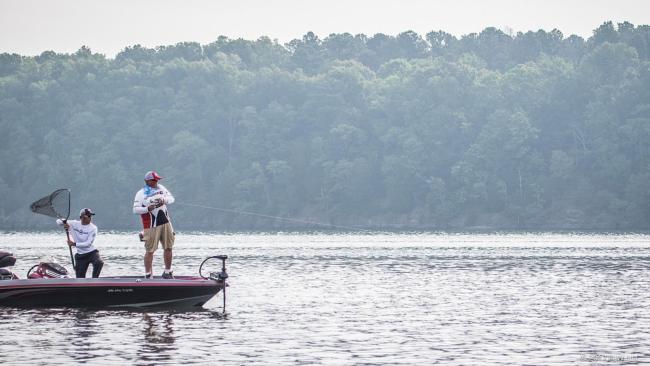 William Merrick, of Mount Juliet, Tenn., added a limit catch of 11-8 to the 15-9 and 16-2 he caught on days one and two and finished seventh with 43-3. Even though he improved by two spots, Merrick lamented the lack of quality fish in the final round.

“I caught fish all day long; I’d have limits every day, but never the big fish today,” he says of the championship round. “I caught a 5-pounder the first day, a 6-pounder the second day. There was a mayfly hatch this week, and I’m not sure that it didn’t draw a lot of the bigger fish shallower.”

Merrick boated almost of his fish on a 3/4-ounce football head jig with a Strike King Rage Craw trailer. The fish, he says, were glued to the bottom, so he turned to a presentation that allowed him to fish where the fish were. 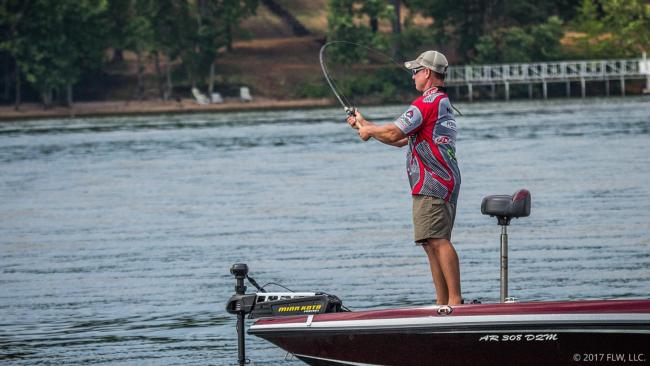 Ronald Nutter, of Saint Louisville, Ohio, brought in one of the event’s four bags over 20 pounds. His was a day-one limit of 20-7 that landed him in third place. That weight came from two adjacent areas: a main river ledge near Pickwick Dam and main lake docks flanked by a deep trough.

The latter produced best when the midday sun pushed fish into the dock shade. In his ledge scenario, Nutter worked a steep drop-off from 18 to 22 feet that had rocks along the slope.

Nutter’s docks didn’t produce in the last round and while he enjoyed an active final day on his ledge, it was more quantity than quality. Ultimately, he ended with a limit that went 10-7 for a tournament total of 43-2. 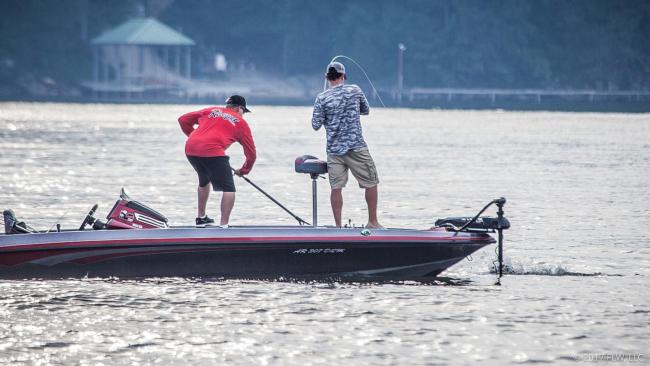 Brad Fowler, of Townville, S.C., struggled with weekend angling pressure, but literally worked until the very end to make the most of a tough day three. Falling one fish shy of his limit, Fowler weighed 8-7 to finish ninth with 40-2.

“We got to our spot and it had some locals on it, so I had to scratch around to get four fish,” says Fowler, who mostly fished ledges mid-lake as well as a river bar near takeoff on the final day. “My last one came at 3:26; I caught a 16-inch smallmouth right outside the off-limits [boundary]. I had four minutes and I didn’t want to give up.”

Fowler caught that day-ender on a Texas-rigged Zoom Trick Worm. His others fell for a Zoom Magnum Trick Worm on a football head.

“I’ve been alternating between the Magnum Trick Worm and the Zoom Ol’ Monster worm,” he adds. “I’d throw it up there and fish it kind of fast. I was trying to cover the area I was in pretty quickly. It was really rocky, so I couldn’t let the bait sit too long in the current, or I’d stay snagged.” 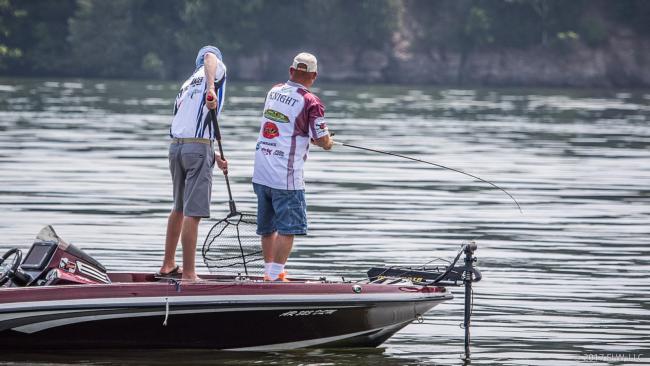 10. Knight goose-eggs in final round

Top five patterns from day one and day two

After fishing his way into third place with sacks weighing 18-4 and 16-2, Jeff Knight struggled with local boat traffic in the final round and ended up blanking. His tournament total of 34-6 dropped him to tenth overall.

“I ran from the dam all the way back up and I never could get bit,” says the Tennessee angler. “The locals got me [the last day]; they were on every spot I tried to fish.”

Having located a “mega school” in practice, Knight plucked several keepers off the spot on days one and two by slowly dragging a football jig along the rocky bottom.