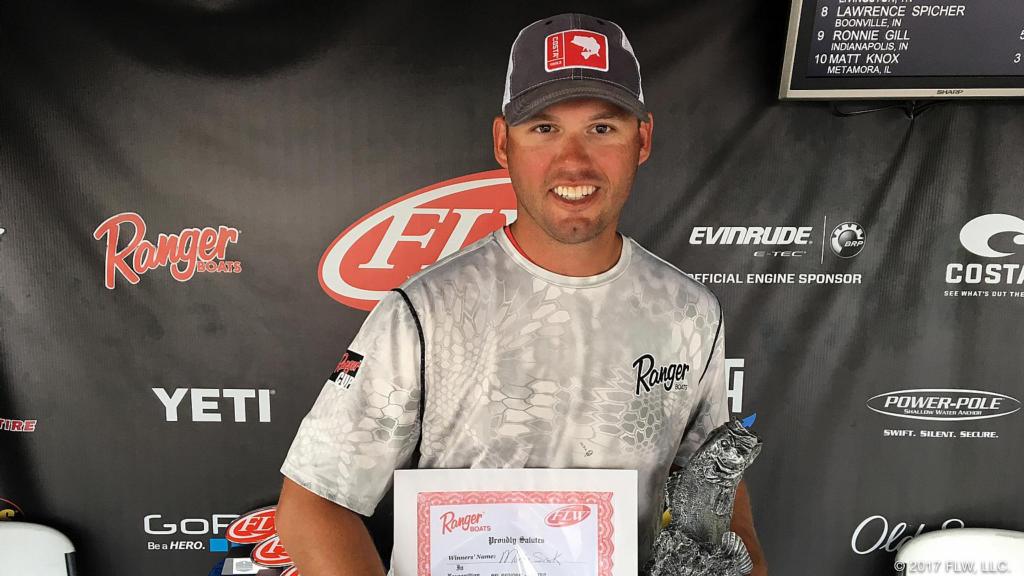 Marty Sisk has been fishing Kentucky Lake for the past 20 years. He knows the fishery. He knows its rhythms. He knows its seasons. So when he arrived there last week for the T-H Marine FLW Bass Fishing League (BFL) Regional tournament presented by Evinrude with a berth in the 2018 BFL All-American on the line, he had a plan, and he executed for the win.

Still, it didn’t get off to a great start.

Then Sisk, who is from Evansville, Ind., happened upon the magic spot.

“It was the right place at the right time,” he says of the shallow-water honey hole that surrendered the lion’s share of his winning weight, “and was pretty much the winning spot.”

Sisk focused on the south end of the sprawling Tennessee River reservoir near the New Johnsonville, Tenn., area.

“I really fished from Danville to New Johnsonville. That’s the area of the lake I concentrated on.”

With water temperatures hovering around 75 degrees throughout the three-day event Sisk expected fish to be shallow, and he was right.

“The reason I went to the southern end of the lake is because there’s a lot more shallow water than on the northern part of the lake,” he says. “And I felt it would be a lot easier for me to find fish in shallow water.”

His approach was simple, and he stuck with what worked.

“I caught ’em all on top using a [Heddon] Zara Spook,” he says. “A bone-colored Spook. One of the big ones. About 5 or 6 inches. I fished in 2 feet of water or less. They were schooling fish.”

All of Sisk’s fish were largemouth bass. Day one was quality over quantity. He grabbed the early lead with a 22-5 first-day limit.

“The first day I only caught six fish, but they were all over 4 pounds. The second day the fish did a lot better,” adds Sisk, who weighed in 15-10 on day two. “My partner and I each caught 10 to 12 keepers the second day. But I really didn’t get the size I got the first day.”

Sisk rotated through about a dozen spots; a comfortable routine he referred to as a “milk run.”

“The best spot was just a little shallow-water point right off the main river,” he says. “I had about 10 or 12 spots and would just make a little milk run. But the one spot was better than the others, and that’s where I caught most of my big fish. But they were all just points off the main-lake channel.”

Fishing guide Brent Anderson from Kingston Springs, Tenn., is probably best known for his tournament record in the fall on Kentucky Lake. So it’s not surprising that Anderson was in the hunt for a Regional title on the big reservoir once again.

The pro believes he was on the fish to win. In fact, he found the same school that winner Sisk fished, and the same school that fourth-place finisher Edward Gettys fished. Unfortunately, he wasn’t able to get on those spots before the competition and had to scramble around every day of the tournament, eventually putting together a program that produced the third day’s biggest stringer – 18-13. It just wasn’t enough to catch Sisk, who outpaced Anderson by more than 5 pounds.

Anderson fished areas ranging from 40 to 50 miles away from the takeoff location. Two- to 3-foot-deep main-lake bars produced all of his catch. The school on his best spot from practice vanished on tournament day, which set him back from the start.

“I spent way too much time trying to find them,” he says. “They were easy to catch once you hit them, but they were just hard to hit. I ended up having to run around and fish a lot of places. I didn’t have a bite until noon the first two days.

“I ended up catching all my fish off places I didn’t even think I would fish during the tournament.”

Roger Fitzpatrick, who finished third on the pro side, also targeted shallow water.

“Probably like most of the top finishers I ran to the Paris [Landing State Park] area and farther south and searched the shoal areas,” says Fitzpatrick, who finished with a three-day total of 40 pounds, 1 ounce and qualified for his sixth BFL All-American. “I caught most of my fish on a Strike King Sexy Dawg in bone. But it was a little windy the third day, and I used a [River2Sea] Whopper Plopper.” 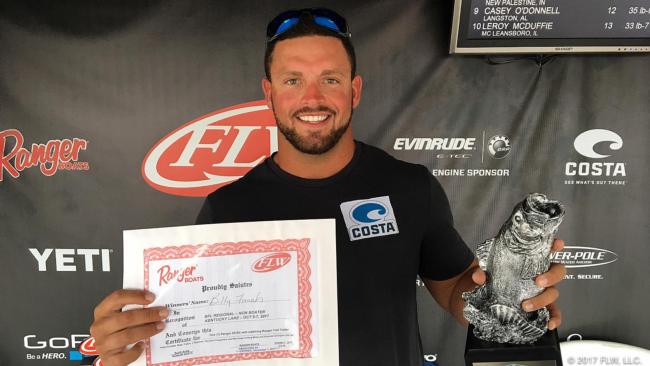 Co-angler champion Billy French echoed pro winner Sisk’s strategy and approach. But, of course, his available water was dictated at the discretion of his boater. Fortunately, he found himself in the New Johnsonville area during most of the three-day tourney.

Most of French’s practice fish had come from shallow water, and that’s where he’d hoped to fish.

“Of course, I go wherever the boater goes,” says French, of Hamilton, Ohio. “But they were in spots where I thought they would be. I was expecting them on the flats and in the shallow stuff.”

Most of French’s keepers came on a bone-colored Zara Spook. But unlike the pro winner, the co-angler champ didn’t stick with a single bait.

French enjoyed the best day of any competitor with a five-fish limit worth 22 pounds, 7 ounces on day two.

“I had the biggest day of the tournament, pro or co-angler,” he notes. “I was pretty excited about that. I really felt like I did something.”

He had done something. The big day two powered French to the winner’s circle, where the co-angler earned a $45,200 prize package that includes a Ranger Z518C with a 200-hp Evinrude. More importantly, he is also on his way to the 2018 BFL All-American.

The Kentucky Lake Regional featured the top boaters from the Hoosier, Illini, Mountain and Ozark divisions. The top six boaters and co-anglers qualified to compete in the 2018 T-H Marine FLW Bass Fishing League All-American, which is a televised event with a six-figure payday and a boater berth in the Forrest Wood Cup on the line.