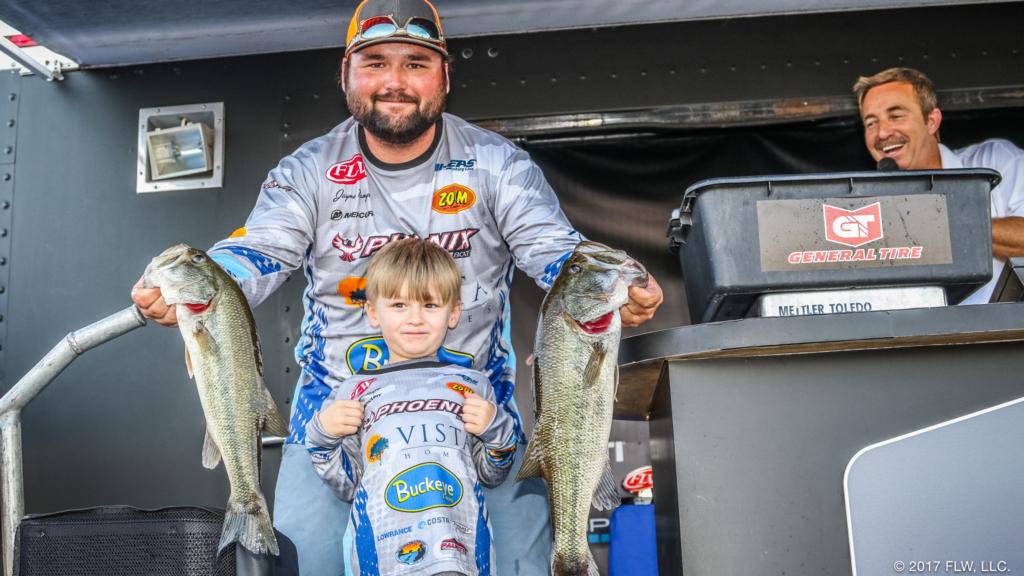 Jayme Rampey knew the usual course to fall success on Lake Lanier, but the boater from Liberty, S.C., brought a different game plan; one that delivered a dominant victory at the T-H Marine FLW Bass Fishing League Regional and secured his spot in next year’s BFL All-American on Cross Lake.

Focusing his efforts on Lanier’s docks, Rampey opened with 13 pounds, 13 ounces and placed second on day one. He would take over the lead on day two after sacking up his heaviest catch – 15-9. Carrying a lead of 3-4 into the final round, Rampey added a day-three limit of 12-7 to slam the door shut with a tournament total of 41-13 and a 4-pound, 13-ounce margin of victory.

“I really expected to come down here and fish brush piles and throw topwaters,” he says. “I came out here and spent a lot of practice time, and I couldn’t do it. So I went to the bank and ended up figuring them out on Wednesday.

“I just ran a bunch of shallow docks and made as many casts as I could all day,” Rampey adds. “I didn’t catch a lot. I probably caught six or seven the first day, 12 the second day and five today [Saturday]. It wasn’t easy by any means.” 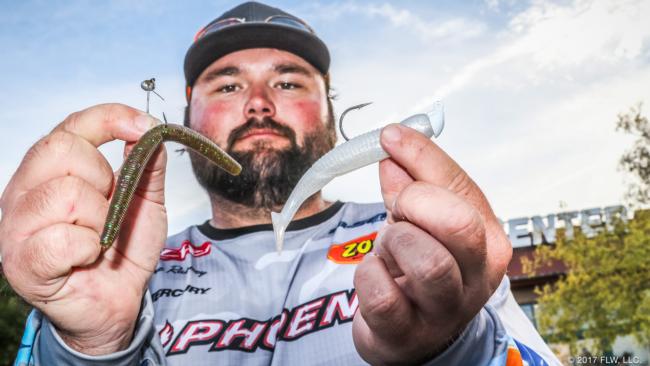 Rampey says that each day delivered a good morning bite, followed by a lull and then a midday rally from 11 to 1. Once the fish shut down, there was no convincing them.

“You only had a few hours to catch them, and then they were really moody,” he says. “They would follow the bait out, you’d see them but they wouldn’t bite.”

Rampey started each day by fishing near the Laurel Park launch site, and then he’d spend the better part of his days near the Buford Dam where flatter banks presented more of the shallow dock habitat he favored. Most of his bites came in 2 to 3 feet of water.

“This time of year, when the lake starts turning over, the fish get really shallow because the oxygen level is good there,” Rampey explains. “That’s what I went for; as shallow as I could get with a little shade on the dock.

“I fished 150 to 200 docks each day. I went to several of them on multiple days, and I never caught fish on the same place more than once. I think they’re really finicky right now, and once they see something, they have a really good memory. Also, the water was super-clear where I was fishing. You could probably see 10 to 12 feet.” 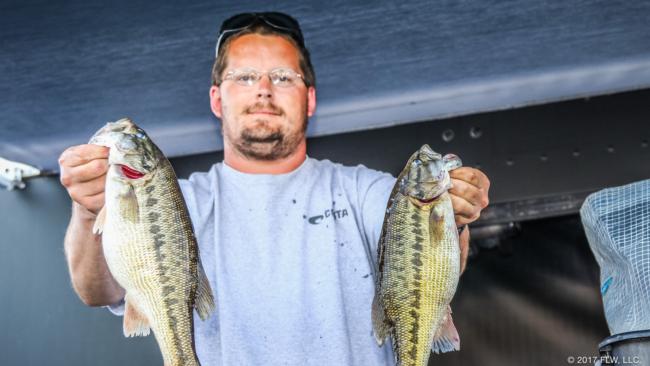 Turning over a new leaf proved prudent for Jeremy Strong of Elberton, Ga., who decided to try a bait he’d never thrown before. The results: a second-place tournament total of 37 pounds.

“My pattern was schooling fish and deep brush with a drop-shot and a spybait,” Strong says. “I had one marina that had schooling fish in it. They were just cruising the docks and blowing up on bait. If you’d hit ’em with a spybait when they came up, they’d eat it.”

Strong used a Duo Realis G-Fix 80 in a shad color.

“I’ve never thrown a spybait before in my life, but I bought two or three of them and stole a bunch from my buddy in case I lost them,” Strong says. “I will be buying some more.

“I used a Reaction Innovations Flirt in morning dawn for my drop-shot. I’m not proud of that. I hate pink worms. But the fish liked it.”

Strong says his marina fish were schooling over 40 to 50 feet of water, while his brush pile action took place in 28 to 35 feet. All of his spots were inside a three-mile area near the dam. 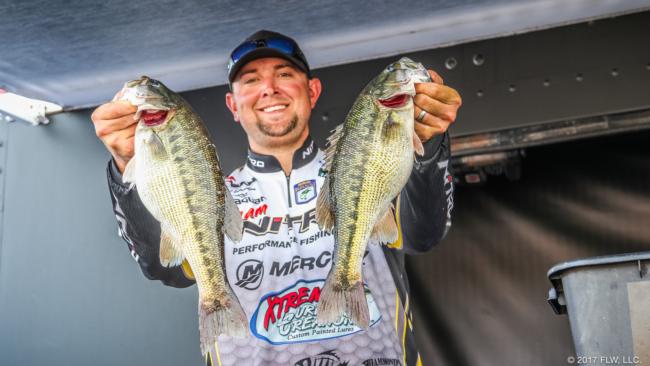 Knowing not only how to catch Lanier fish, but also how to adjust with their behavior proved essential for Rob Jordan, who took third place with 36 pounds, 14 ounces. Brush piles and schooling fish comprised significant elements of his performance.

“I caught a lot of fish over brush piles on a topwater, but when I threw a topwater, if they didn’t come up, I’d move in and throw a drop-shot,” he says. “Some were schooling over brush, but some were over timber. I noticed that when the fish up here get a lot of pressure on them, they tend to back off. A lot of the fish I caught were in 30 to 40 feet. My approach was to move around and hit lots of places. On average, we hit 40 to 50 spots a day.”

Jordan says he also adjusted his bait offerings based on what the fish were targeting. When they blew up on blueback herring, he’d throw a Jackall Bowstick in a custom-painted blueback pattern. When they chased small threadfin shad, he’d use a drop-shot with a Z-Man Finesse WormZ or Trick ShotZ in green pumpkin or twilight colors. 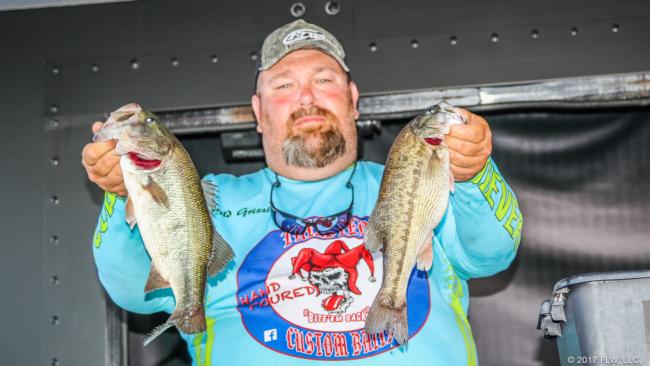 After leading the co-angler division on the first day with 11 pounds, 12 ounces, a mid-tournament stumble of two fish for 3-12 on day two threatened to torpedo Harold Grizzle’s hopes. Nevertheless, the Gainesville, Ga., competitor leveraged his local knowledge and uncorked a stout final-round 10-4 effort that led him back to the top with a winning total of 25 pounds, 12 ounces.

Living 10 minutes from Lanier, Grizzle says he knew the crawfish hatch would have a lot of fish picking around main-lake rocky points. That’s why he kept a 1/4-ounce jig with a twin-tail grub trailer in his hand most of the tournament.

“I told somebody I was going to live by the jig and die by the jig,” Grizzle says. “It worked great.”

Essential to his performance was a game-changing day-three catch in the closing moments.

“I caught my biggest fish today [Saturday] in a creek ditch with less than five minutes to go,” Grizzle says. “I caught a keeper there on day two, which put me in the top 12. I only had two fish yesterday, but I told my boater for today that I needed to stop on that spot and catch another keeper.”

Grizzle says the fish required a super slow jig presentation. In addition to his primary bait, Grizzle also caught fish on a drop-shot with a Roboworm in the morning dawn color.

The Lake Lanier Regional featured the top boaters from the Gator, Savannah River, Shenandoah and South Carolina divisions. The top six boaters and co-anglers qualified to compete in the 2018 T-H Marine FLW Bass Fishing League All-American, which is a televised event with a six-figure payday and a boater berth in the Forrest Wood Cup on the line.