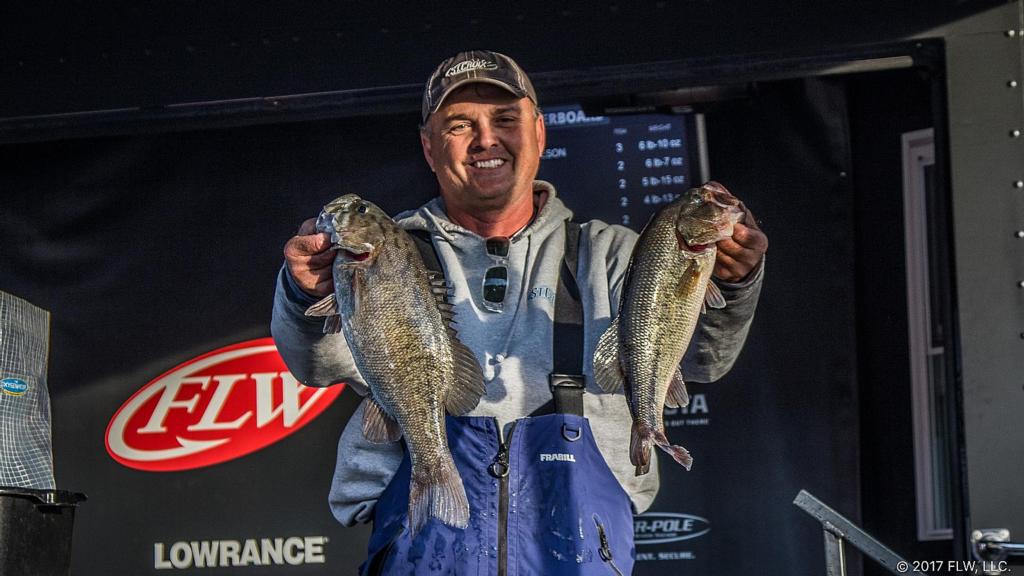 The T-H Marine FLW Bass Fishing League (BFL) Wild Card is a last-chance shot at the All-American for BFL anglers that didn’t qualify for a Regional. It’s the official end of the season for FLW, and this year Kevin Powers of Unicoi, Tenn., earned the last win of the year. Weighing limits for 17 pounds, 14 ounces on day one and 14-11 on day two, Powers’ 32-9 total was plenty for the win and qualification for the 2018 All-American on Cross Lake. Because Powers entered the optional side pot, he took home $4,373 in addition to the winner’s trophy.

The fishing on Kentucky Lake has been uniformly tough this fall, culminating on the final day of last week’s Costa FLW Series Championship when Bradford Beavers was the only angler in the top 10 who managed a limit.

The Wild Card took off from Kentucky Dam Marina, so running over into Barkley for a change of pace was a reasonable proposition for the competitors.

“The last time I was here was probably 10 years ago. I fished a Regional here, and it was pretty tough back then, too,” says Powers, who practiced with his father for the tournament. “We came here Monday and stayed over by Eddyville on Barkley, and we started catching some on topwater until the lake muddied up. But, my dad is a slow fisherman, and he likes fishing out a little off the bank a little more than I do, and that was the key this week.” 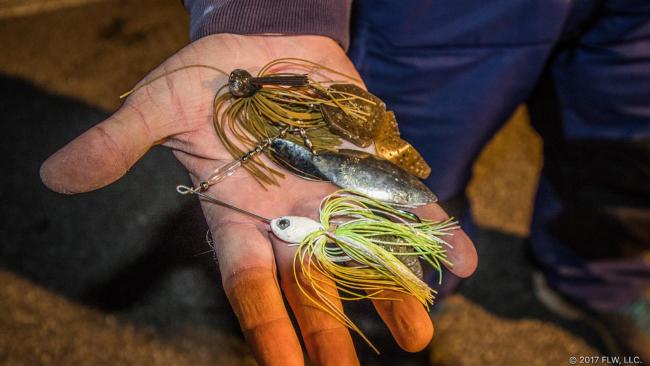 Throwing a Lunker Lure Rattleback Jig matched with a Zoom Big Salty Chunk as well as a homemade 5/8-ounce spinnerbait, Powers totaled up 17 keepers over two days of fishing.

“I looked for deeper banks on the main channel that had some laydowns on them,” says Powers. “With the water being down right now, and me not knowing the lake, I was just looking for the same things we’d fish back home in east Tennessee.” 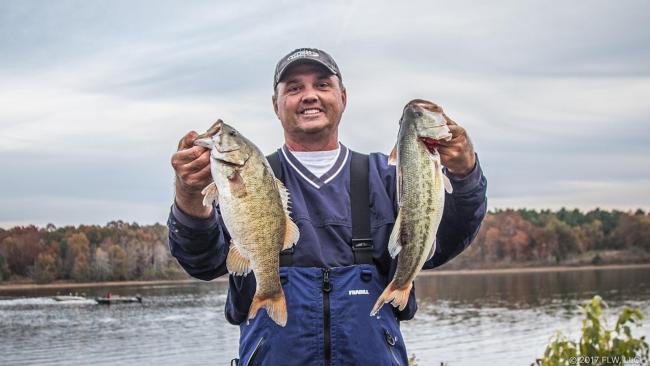 Powers fished a number of different banks, but he did a lot of his work with his jig on one magical laydown tree. Finishing out in about 13 feet of water at its end, the tree produced five keepers on day one (four that made it to weigh-in) and an astonishing seven keepers on day two.

“Me and dad were fishing up the bank above it in practice and I caught a 3-pounder, so I pulled up the trolling motor and idled by,” says Powers. “I hadn’t ever fished it before until yesterday [Friday]. I thought it looked good, but I never imagined that.”

Powers’ biggest fish of the week was a hefty smallmouth he caught on the spinnerbait on day one. Fishing the same types of woody banks he targeted with the jig, Powers tried to keep his blade as tight to the bottom as possible. In practice it produced a 6-pounder, but the jig was definitely the key to the week.

“It feels great; that’s what I keep fishing for,” says Powers of his second All-American qualification. “I didn’t have a very good year fishing regular BFL tournaments, so this is a great way to finish it off. This is my fifth win fishing FLW stuff. Hopefully it won’t be my last.” 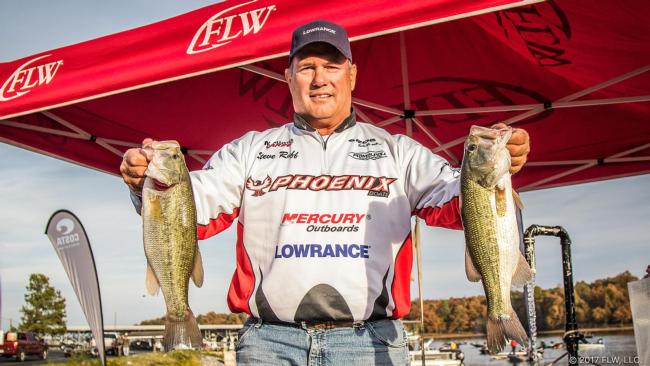 Making a long run south of New Johnsonville each day, Steve Ruff caught steady limits for a total of 28-2 to lock up qualification for the All-American.

“I wound up finding my fish where there was a current break. It changed every day. The fish actually got deeper today [Saturday], and I wound up catching them on a Strike King Series 5 and an Alabama rig, and I hadn’t thrown an Alabama rig all week.”

Ruff says he caught all but one of his keepers off one spot, sitting his boat in the channel in about 20 feet of water and fishing up in 2 to 6 feet of water. On day one his primary baits were a Strike King Series 3 (sexy shad) and a 1/2-ounce Strike King Red Eye Shad (chrome sexy shad), with a shaky head mixed in. His biggest fish that day came on a topwater on a shallow bar that he hit on the way back from his limit hole. With the fish sitting a bit deeper on day two, Ruff turned to a Strike King Series 5 (sexy shad) and a three-wire bladeless umbrella rig with 1/8-ounce heads and 4.8-inch Keitech Swing Impact FAT swimbaits.

Ruff experienced some motor trouble on the ride down south on day two, and after getting his limit he cut the day short at only 10:45 a.m. Despite not getting to fish his good stuff the rest of the day, he still had more than enough to earn his second trip to the All-American. 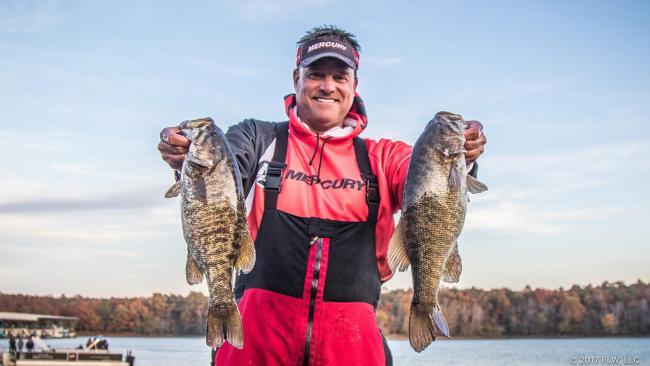 Day one does it for Palmer

Freddy Palmer led the whole deal with 19-10 on day one, but he failed to catch a keeper on day two and settled into third place for his first All-American qualification.

“Everything came out of the canal, and it burned me today [Saturday],” says Palmer, who fished the canal that connects Lake Barkley to Kentucky Lake on day one. “I had about a 50-yard stretch where I caught a couple in practice, and that’s where four of mine came from. Then I started venturing out a little farther away from that 50 yards, and I caught my biggest one about 100 yards away. Yesterday the current was coming out of Barkley and into Kentucky, which brought the color with it. Today it was crystal clear. The current was flowing from Kentucky into Barkley.”

Palmer’s primary bait was a Tennessee shad-colored Strike King 5XD, and he fished it in 8 to 12 feet of water along the riprap bank. Palmer actually caught five keeper smallmouths on day one, but later culled two of them out with largemouths.

On day two, Palmer fished the canal for two hours and then started to run, hitting spots in Jonathan Creek and Blood River with no success. Palmer has finished seventh in BFL Regionals twice, just one spot out of making the All-American, but one great day of fishing in the Wild Card was enough to send him on to Cross Lake this time around. 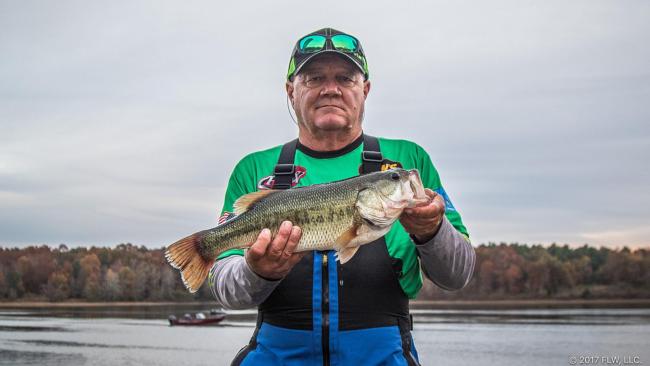 Scott Stallings has been a fairly prolific co-angler over the years with FLW, but he’d never earned a win until the Wild Card. In addition to the $2,235 from the side pot, Stallings also locked up his first All-American qualification.

“I caught ’em on a Carolina rig,” says Stallings, whose three bass on day two keyed his win. “Yesterday [Friday] I caught my fish on a Senko. Today it was points and steeper banks back in the cuts, and most of them came in 8 to 12 feet.

“I’d been here a long time ago this time of year, maybe 2005. I did basically the same stuff then. Every time I come to Kentucky Lake I do basically the same thing,” relays Stallings. “I have some back problems, so after I do a lot of chunkin’ and windin’ I have to do something different. And the Carolina rig is something I can work slow and isn’t hard on me.”

Stallings caught one keeper with a Yamamoto Senko on day one, but the bulk of his weight ate a Carolina-rigged 8-inch Zoom Lizard in watermelon with the tail dyed chartreuse.

“I know a lot of guys that have fished these for years and years and have come close and never made it,” says Stallings of his All-American qualification. “This is just my second year fishing the BFLs, so I consider it an awesome thing.”

The Wild Card on Kentucky Lake featured BFL anglers who paid an entry fee prior to each of the five tournaments in a division, fished at least two of them and did not qualify for a Regional in any division. The top six boaters and co-anglers qualified to compete in the 2018 T-H Marine FLW Bass Fishing League All-American, which is a televised event with a six-figure payday and a boater berth in the Forrest Wood Cup on the line.