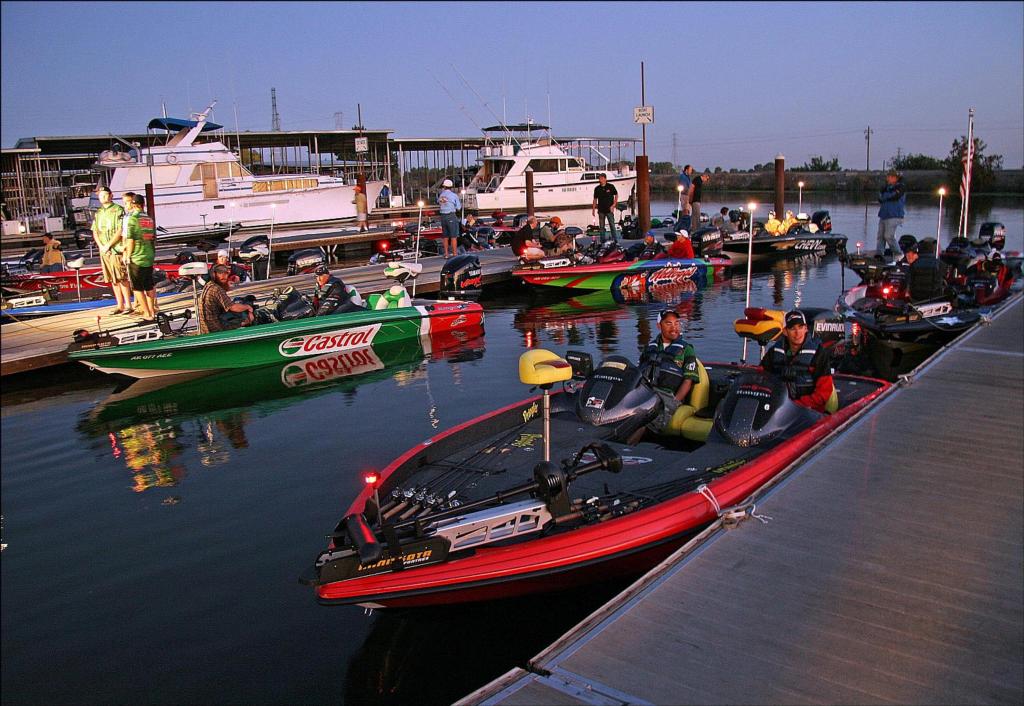 STOCKTON, Calif. – They can rest in the AC later, but for one more day, the top five teams in the National Guard FLW College Fishing Western Regional Championship will sweat it out on the California Delta.

A relentless heat wave will show no quarter today, with afternoon temperatures reaching 94 degrees Fahrenheit. Flags will show barely a flutter, and anglers will need plenty of sunscreen and water.

Today’s tide schedule for the Stockton area will see incoming water peaking around midmorning, with a falling tide bottoming out between 1 and 2 o’clock (depending on location). Strong, moving water – in or out – can yield good opportunities, as the current positions bass and their forage in predictable areas. Given the week’s extreme heat, shallow backwater lakes will be unlivable for bass, so competitors will want to stay close to main-channel current, ideally somewhere with quick access to deep water.

Morning hours may offer reaction-bite potential, but once the sun rises high in the sky, bass won’t stand 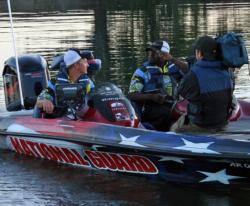 around working on their tan. They’ll head to shady cover such as weed mats, tules or bridges.

Eric Andersen and Glen Wyatt of San Jose State have led the field since day one. They enjoyed plenty of action during the opening round’s partly cloudy and cooler conditions, but struggled on day two as high pressure cleared the skies and saddled the Delta with straight sunlight that baked the fish and fishermen. Planning for today’s scorcher, the leaders will do their best to strike quickly and then grind it out through the day’s heat.

Wyatt has fared well with a ChatterBait sporting a white split-tail trailer. He’ll throw this bait early, while Anderson works a Zara Spook. Later in the day, they’ll slow down and throw plastic worms. 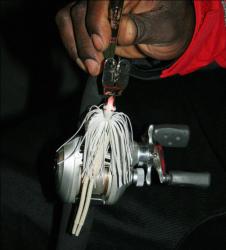 “We’ll be all over the Delta today,” Wyatt said. “We’ll be back and forth from Frank’s Tract to (the Stockton area) two or three times today. We’ll be looking for tule walls with deeper water around them and some weeds.”

With the second-place team of Alec Brassington and Christopher Wong trailing by just over a pound, Andersen and Wyatt can’t afford to slip up today. They missed their six-fish limit by one bass on day two. Coming up short in the final round could cost them the win, so theirs must be an effective blend of quality and quantity. They’ll definitely want the biggest fish they can find, but not at the expense of missing their limit.

Representing Sacramento State, Brassington and Wong have been counting on an afternoon bite during the start of the incoming tide. Today, they may not be on the water during that window of opportunity. Final-round competition will wrap up about an hour earlier than the previous two days for weigh-in staging purposes.

“Today, we’re making some changes, so hopefully we can get some more fish this morning so we don’t have to totally bank on the afternoon,” Wong said. “We’re making about a 45-minute run, but that’s not the problem – it’s the run back. We have less fishing time today, and the tide is an hour later.

“If we have our limit, I want to save at least 45 minutes to safely make it back, so we’d have to leave at 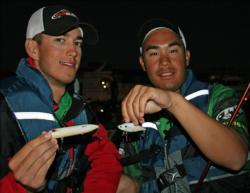 Brassington and Wong will throw Zara Spooks and Senkos early and then spend most of the hotter hours punching weeds with Texas-rigged plastics. They might work in some lipless crankbait action midday.

In third place, Arizona State’s Joseph Jarrell and Mark Walker trail the leaders by 3 pounds, 6 ounces. They will also fish topwaters and Senkos early, with drop-shots their go-to bait for later in the day. Knowing they have a lot of ground to make up, Jarrell and Walker are looking for big numbers today.

“We’re going to one of our spots with better-size fish,” Jarrell said. “We’re looking for a 20-pound bag. We want to make up this weight, and we want to beat all these guys by 4 or 5 pounds.” 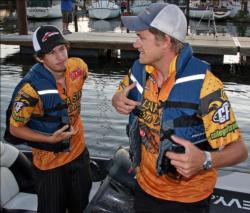 Having celebrated his 20th year a week ago, Jarrell adds: “I need my birthday present. My birthday was last Tuesday, and my partner didn’t get me anything. I asked for a 14-pounder, but I think I’ll go for an 8-pounder now.”

The fourth-place team, Fresno State’s Sark Davidian and Kong Moua, reached the top five with a dramatic day-two comeback. After a 12th-place day-one finish, they weighed the second day’s heaviest catch – a 13-pound, 15-ounce effort that included Davidian’s 5-pounder. Davidian stressed that he and Kong have worked effectively as a unit.

“It’s been a team effort,” he said. “We’ve bonded really well, we’re willing to take advice from one another, and that has allowed us to put fish in the boat.” 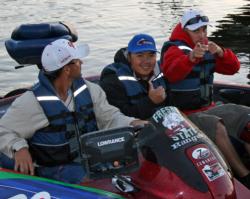 tournaments gained automatic entry into the 2009 Western Regional Championship at the University of the Pacific. During the three-day regional event, 20 two-man collegiate angling teams will compete for a top award of $50,000, which includes a 177TR Ranger wrapped in school colors and powered by an Evinrude or Yamaha outboard engine. 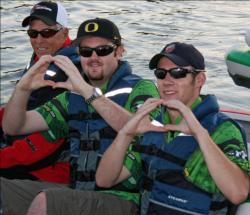 Weigh-ins begin at 4 p.m. at the University of the Pacific Aquatics Center Parking Lot in Stockton. Weigh-ins are free to attend and open to the public.