Gators win it all 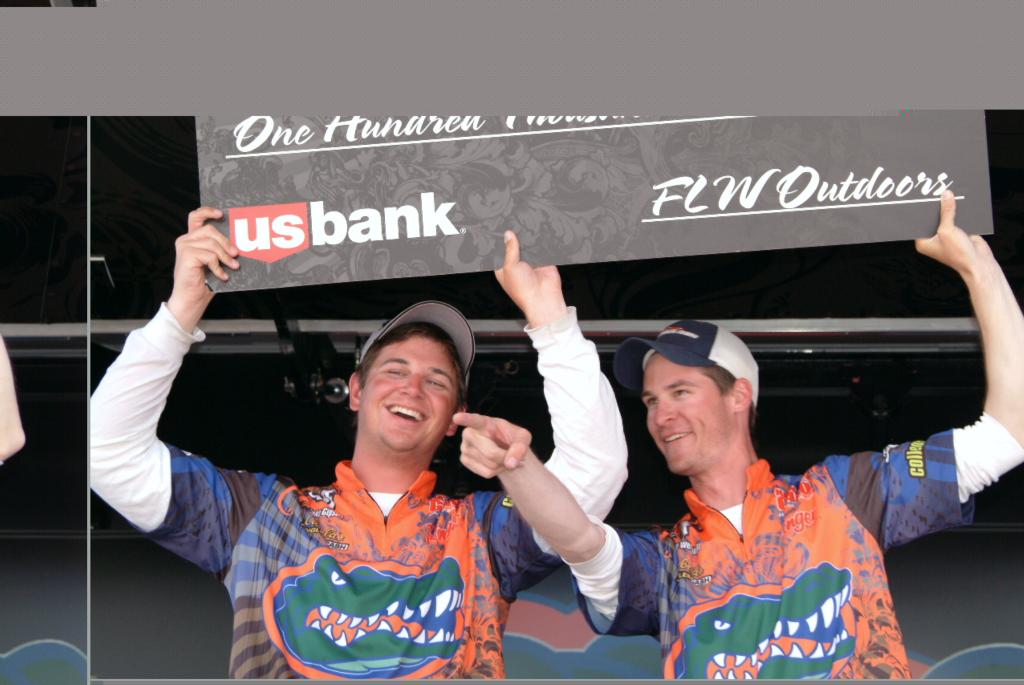 KNOXVILLE, Tenn. – It took more than a year for the first-ever National Guard FLW College Fishing National Championship to finally unfold. But in the end it was clearly worth the wait. During a tense and nerve-wracking weigh-in on the final day, the University of Florida eked out a dramatic 9-ounce victory over rival Texas State University.

With both teams standing onstage, Texas State University needed only 6 pounds, 13 ounces to walk away with the tournament title. As the University of Florida team of Jake Gipson and Matthew Wercinski looked on, the Texas State University team of David Cosner and Jay McCollum, who entered the day as the top qualifiers, weighed in their three-fish catch and awaited the official announcement.

“Do you know CPR?” joked Cosner during the weigh-in’s finals moments. 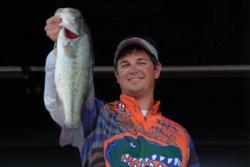 “I can’t believe it,” said Gipson, shortly after victory was announced. “I honestly thought (Texas State) had us. Usually three fish on this lake will weigh over 6 pounds. I don’t even have words to describe how great this experience has been. Coming back to weigh-in, we’re pretty depressed. We had a couple of opportunities, and we missed some fish. So to come out on top is just unreal.”

To be sure, the Florida Gators didn’t take the easy road to the title.

“We’re in 11th place after day one, and we were really struggling,” said Gipson. “So we knew we had to change things up. We decided to start fishing jerkbaits on main-lake points and throw jigs along riprap banks in backwater areas. That’s what we did the last two days, and that really made a difference.”

“After day one, we didn’t think we’d have a chance to even fish on Monday,” said Wercinski, whose team ultimately recorded a three-day catch of 29 pounds, 10 ounces. “But we fished hard and we fished as a team – it was truly a team effort. When I struggled, Jake caught them. And when he struggled, I was able to catch them. We’ve been fishing together for four years, and now we’ve won the championship. It’s just amazing – it’s so amazing.”

For their efforts, Gipson and Wercinski walked away with a $100,000 total prize package – $50,000 for their university, $25,000 for their bass club and a brand-new, fully rigged Ranger 177TR bass boat wrapped in their school colors. 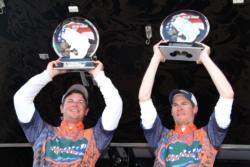 “We’re going to look really good rolling around campus with a boat and truck in our school colors,” said Wercinski. “That’s pretty cool.”

In addition to the cash and prizes, Gipson also received an automatic invite to the 2010 Forrest Wood Cup for a chance to fish against the nation’s top pros – as well as a chance to win the first-place prize of $600,000. Wercinski also locked up a berth in the Forrest Wood Cup as a co-angler, with a chance to net an additional $50,000.

“That’s just unreal,” said Gipson of winning a place in the prestigious Forrest Wood Cup. “It’s a dream come true to fish with the best bass fishermen. I don’t even know what to say.”

“Me and my partner, Jake, will remember this day for the rest of our lives,” said Wercinski.

Of that, there is little doubt.

In any tournament, there is jubilation and there is also heartache. For the Texas State University team of David Cosner and Jay McCollum, Monday’s events were nothing short of a rollercoaster ride. Heading into the finals, Texas State University held the top qualifying position. But in the end, the team fell a mere 9 ounces short of their dream, finishing second overall after three days of grueling fishing and tremendous pressure. 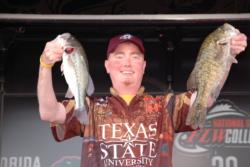 “Wow,” said Cosner, shortly after learning that his team had come so close to the title only to come up short at the very end. “It’s crazy. I knew it was going to be close. We got a big bite again today, but it just wasn’t big enough. But we’ll take second place any day.”

McCollum also said he had mixed feelings about the final outcome.

“To lose by 10 ounces is just crazy,” said McCollum, whose team posted a three-day total of 29 pounds, 1 ounce. “It’s a little sad. I wish we would have taken it. But it was an awesome experience. And, hey, we finished second in the nation.”

Cosner said that the team targeted bass most of the week by flipping a Jewel jig at docks, riprap and lay-downs.

“I actually caught my last fish five minutes before we came in,” he said. “It came unhooked and bounced around, but we managed to keep it in the boat. I thought that might have been the difference.”

But in the end, it was not to be. However, Texas State put up a valiant effort, especially since the team only started up their bass club this year – an amazing accomplishment to say the least.

“I’m only a freshman, so I’ll be around for a while,” said Cosner. “Who knows? Hopefully I’ll be back.” 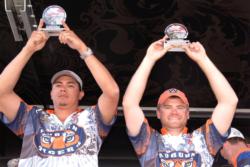 On the strength of a three-day catch of 28 pounds, 10 ounces, day-one leaders Shaye Baker and Dennis Parker propelled Auburn University to third place in the nation after the final championship weigh-in.

While the team appeared to be close to unstoppable after the first day of competition, the duo stumbled on day two – opening the door for the rest of the competition. However, the team rebounded strongly on the third and final day of competition, bringing in the biggest stringer of the day at 10 pounds, 14 ounces to briefly take over the top spot on the leaderboard.

“After yesterday, we didn’t even think we’d make the cut,” said Baker. “But now we’re one of the top five teams in the nation. We went out there and did some different stuff today. And our decisions paid off big time. And that’s all you can hope for. Taking a step back from everything, it was an awesome experience.”

“I dreamt of this day since I was a kid,” said Parker. “We were on the right fish, but we just didn’t get to them soon enough today. It took us until 12:30 to get our first fish in the boat, and then we finally realized what we needed to be doing. We saw two 3-pounders and another 4-pounder, but we didn’t get them in the boat. Heading into today, we were just excited to be here. But then everything came into perspective for me this morning, and we really decided to go for it. In the end, we just came up a little short.”

“It was definitely a chess game out there,” said Baker. “We did great on the first day, and yesterday we bombed. Today we went back to fishing simple, the way we know how to fish, and it worked out. We did miss two fish today, but we finished as one of the top five teams in the nation. And we had a lot of fun.”

In the end, the team walked away with $25,000 in winnings, split between their bass club and university. 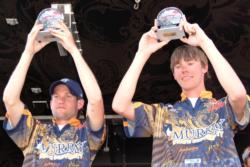 After blanking on the second day of competition, Murray State University teammates Kalem Tippett and Steve Miller rebounded for a total three-day catch of 21 pounds, 8 ounces and a fourth-place finish.

“It’s been an awesome ride,” said Tippett. “To be in contention for a title is all you can ask for going into the final day. Overall, it was a great opportunity.”

The Murray State University team took home $20,000 in cash, to be split evenly with their bass club and university.

Rounding out the top five teams at the 2010 FLW College National Championship was Texas A&M. Led by teammates Paul Manley and Andrew Shafer, the duo recorded a total three-day catch of 21 pounds, 7 ounces – finishing just 1 ounce out of fourth place. 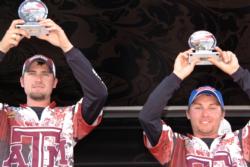 “It was tough out there today,” said Manley. “The fish were there, but the size wasn’t.”

While the team would have liked to have finished higher in the standings, they said fans should expect to see them again in the not-to-distant future.

“We’ve already qualified for the (2010 FLW College Fishing) regionals, so hopefully we’ll be back in the championship next April,” said Shafer.

For their efforts, the team walked away with $15,000 in winnings. 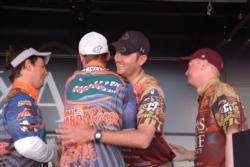